A fond farewell to the original trickster of Lone Star art

The Texas artist who gave us the 40-foot-tall cowboy boots outside San Antonio's North Star Mall, the 12-foot-tall iguana standing guard over Ft. Worth Zoo's animal hospital, and the 25-foot-long horns hanging in UT-Austin's alumni center, among other wonders, has gunned his pickup for the last horizon. Bob "Daddy-o" Wade has died at age 76. 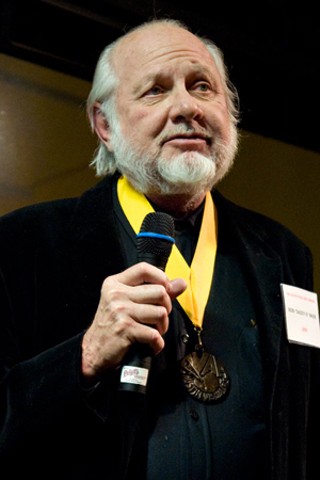 Wade was a native Texan who took everything about his home state – the good, the bad, and the cheesy – and mashed it up into works that sometimes looked like they sprang from some junk man's bender or an ad man's fever dream. But they were always clever and always fun and positively inspired in what they had to say about Texas. Writing about Wade's 40-year retrospective at the South Austin Museum of Popular Culture in 2009, I put it this way: "Bob Wade gets what the Lone Star State is all about – on a cellular level, it would appear – and has spent four decades not just making work about it but imbuing that work with a palpable sense of Texas' expansive, expressive, excessive, eccentric, irreverent, and rambunctious ways." People were drawn to Daddy-o and his art, so much so that no matter how ridiculous a work of his might be, they became protective of it and saw to it that it survived. That colossal iguana stood on the roof of the Lone Star Cafe in New York for 12 years, but when the restaurant went away, a couple in Virginia saved it, and then eventually the Ft. Worth Zoo acquired it. The giant boots were made for a temporary display in Washington, D.C., but then North Star Mall gave them a second life, and they've been a San Antonio landmark for 40 years now. A sextet of 10-foot-tall dancing frogs that Wade created for the roof of the Tango nightclub in Dallas in 1980 ran afoul of a city ordinance and were taken down, but they live on: Three went to Houston to sit on a Chuy's there and now Chuy's has installed them at a Nashville outlet, and the rest went to the big truck stop at Carl's Corner for many years. Then, they were acquired by Taco Cabana, which brought them back to their original site in Dallas. Of his works' longevity, Daddy-o once observed, "I'm so old that my stuff is being refurbished."

But in addition to the better-known monumental sculptures, Wade created beautiful hand-tinted versions of antique photographs and postcards. In a Chronicle review of a 1996 exhibition that featured this kind of work by Wade, Rebecca S. Cohen wrote: "You might be surprised to learn that he was formally trained to paint in the traditional Renaissance style. But one look at his work in this collection and you'll be able to see Wade's education at work. The paintings are clearly the work of an eccentric artist, but it takes a well-trained eccentric artist to create a blown-up, hand-painted photo of smiling cowgirls from the Thirties.

"For these works, Wade has taken historic black-and-white photos and images from nostalgic postcards, enlarged and projected them onto linen fabric, then painted them with an airbrush. He somehow maintains an excellent resolution with the photos, even when enlarged 200 percent. The results are bigger-than-life hula girls, cowgirls, cowboys, and matadors highlighted with subtle, translucent hues." It's still Wade, and it's still Texas, but it's the state's sentimental, softer side – the yang to its loud, boastful, "everything is bigger in Texas" yin. Stop in at Ranch 616, and see his panoramic, pastel look at a Texas swing band from the Thirties, and you can see it. {Daddy-o is also responsible for the sculpted snake who curvy body spells out the restaurant's name out front.) Even accounting for a career that spanned 50 years, Daddy-o's output was prodigious; he seemed to be working constantly, and despite his passing on Christmas Eve (the cause was heart failure), he will keep producing in 2020. In August, Texas A&M University Press will be publishing Daddy-o's Book of Big-Ass Art, edited by WK Kip Stratton, and the Umlauf Sculpture Garden and Museum will host an exhibition titled "The Big-Ass World of Bob 'Daddy-o' Wade" in the summer. It will be good to have him around still.

Wade is survived his wife, Lisa Wade, and more friends and admirers than is possible to count. Update, Dec. 29: Lisa has announced that a memorial event will be held Sun., Jan. 5, 3-5pm, at Ranch 616, 616 Nueces.

In closing, here is another excerpt from the 2009 feature review about "Blood, Sweat and Beers," the SouthPop 40th anniversary retrospective: "The various kinds of work allowed Wade a way to more fully tease out his notions about the state's history and myths; its geography and customs; its tastes in fashion, food, and music; and its attitudes toward that Holy Trinity of Guns, Cars, and Beer.

"The biggest works are among his best-known, and considered in the context of all his work, it's easy to see why: They capture the spirit of Texas' sense of scale. We love the bigness of the place itself, and we love the idea of people accomplishing big things in it – like Pecos Bill, riding a twister and lassoing the Rio Grande to water his ranch and shooting all the stars from the sky except one, Bob "Daddy-O" Wade has been giving us those kinds of grand, mythic feats for 40 years, one long, crazy Texas tall tale in fiberglass and steel, served up with a wink and a hearty 'yee-haw.'"