This touring version will have you breaking out the tissues 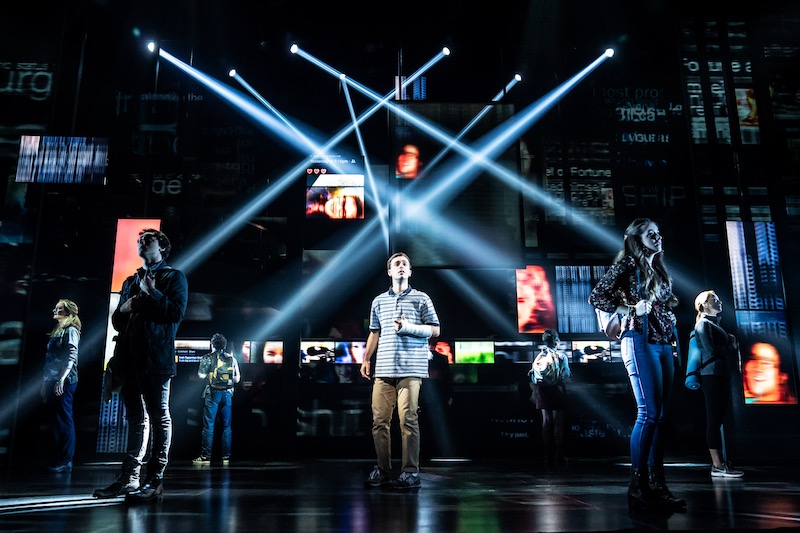 Walking into Dear Evan Hansen at Bass Concert Hall, you’re accosted by bleeps, blips, and tones quickly identifiable as the chatter of the digital world. On each side of the stage, lines of hypertext flow like rivers around the lead character’s bed: Facebook, Twitter, Buzzfeed. It’s a reminder of the landscape surrounding teens like Evan today.

Some will remember the hit Broadway play, which debuted in 2016 to rave reviews for its young star, Ben Platt, and an armload of Tonys. The show follows Evan (Stephen Christopher Anthony), a fretful high school senior and lover of trees. In fact, he’s recently broken his arm falling out of one when a limb accidentally broke beneath him. Evan has no friends, only dreams of Zoe Murphy (Stephanie La Rochelle), who has captured his heart. On the first day of school, his mother (Jessica E. Sherman) encourages him to ask the other kids to sign his cast, which no one wants to do, because dear Evan Hansen is a loser.

Enter Connor (Noah Kieserman), town troubled kid and the big brother of Evan’s crush. Connor finds and steals a letter Evan has written to himself, which begins fittingly enough, "Dear Evan Hansen." It's meant to be a daily encouragement, but on this particular day, the letter is honest and sad and reveals just how close Evan is to the edge. Three days later, Connor is found dead, from suicide, with Evan’s letter still in his pocket. The Murphys (John Hemphill and Claire Rankin) are left to assume that Evan is Connor’s only real friend. Desperate to help them heal, he weaves a web of lies concocting a fantastical relationship.

The performances and stage quality here are the caliber an audience can expect from a national tour. Anthony’s Evan lacks Platt’s deep pathos – it was well-noted how he broke down sobbing in every show – and he’s not the same romantic lead – he's more nerd than neurotic. But his voice is translucent and pure, his energy frenetic. Kieserman’s Connor is appropriately sulky prior to his death, but in the imagined afterlife, he joins in the joyful bouncing of Evan and family friend Jarred (Alessandro Constantini) on “Sincerely, Me." Sherman, as mom Heidi, prompts tears throughout the house when she croons “So Big/So Small,” about Evan’s childhood fear that the truck that took dad away would return for her tomorrow. I would also be remiss not to mention Samantha Williams as Alana Beck, the do-it-all know-it-all whose perky suspicion rattles Evan’s reality.

Great performances all, but the true star of Dear Evan Hansen is its songs. The music by Benj Pasek and Justin Paul is clear and vulnerable, reflective of young Evan. In high tenor bell tones, almost falsetto, Evan croons pop lullabies about friendship, love, and the world’s foibles, tying them up in sweet bows, like presents, perfect for the holiday season. His Act 1 closer – a tribute to Connor – is a power ballad called “You Will Be Found,” and it becomes a viral sensation. It’s also another letter to himself. When Evan fell from that tree, he waited there at the bottom, broken, for someone to find him. No one did. But in his unreality, Connor picks him up, and that gentle lie is an elixir that soothes not just Connor’s parents and the internet, but Evan’s soul, too.

Let’s call Dear Evan Hansen the best cry you’ll ever have. I highly recommend you break out the tissues and find yourself at the show before it’s gone.