Andrea Lawlor and Karen Tongson on music's doorway to self-discovery

Young people often find out who they are by sitting in their room, alone, listening to music. Each song played, sometimes on constant repeat, provides a portal into potential identity, for none more than LGBTQ people. At least that was the position on They’re Playing My Song: Pop Music and Queer Identity, with Andrea Lawlor and Karen Tongson. 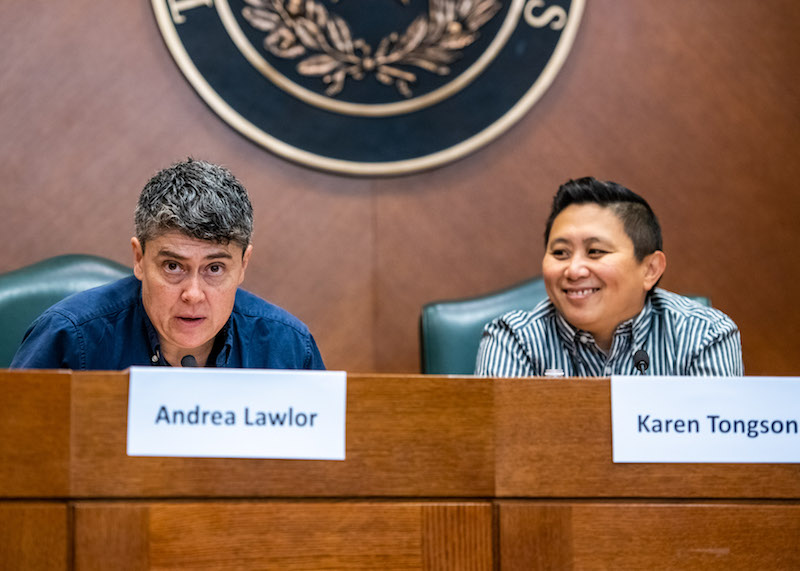 Tongson opened the gathering by reading from her 2019 book Why Karen Carpenter Matters, a combination biography of the late singer and Tongson’s memoir. A strange connection between the two Karens began when Tongson, the daughter of Filipino musicians, was named for Carpenter, and followed Tongson even after she immigrated to America. The author said she used pop music then as a hoped-for bridge to assimilating with her peers; but due to her musical choices, which revolved around her love for soft pop like Air Supply and Carpenter, in the end, she only succeeded in alienating herself still further.

Lawlor then read from their novel, Paul Takes the Form of a Mortal Girl. The book, as described by its author, is about a queer shapeshifter who can change his body at will. When the protagonist falls in love with a lesbian in Iowa City, he attempts to morph into a lesbian, too, wooing the girl with the time-honored tradition of a well-made mix tape. As in the novel High Fidelity, the section that Lawlor read tried to capture that alchemical approach to communication – how much to say of one’s feelings and to reveal of one’s true intentions – through the art of song selection.

In the dialogue that followed, both authors agreed that, for them, coded music, rather than anthemic, “on-the-nose” songs like “Born This Way” or “Same Love,” succeeded in better capturing the queer experience. Tongson shared, “There’s a sense of crackle pop-iness in certain music that just feels gay, and I don’t need a song to say, 'It gets better.’” The session was lively with humor and insight in a way that only a room full of queers (and those who love them) can be. Attendees discussed Eighties music, cassettes versus streaming, and the magic of libraries as places queers (and everyone else) have the space and resources to discover who they are.

Whether it’s George Michael or Tegan and Sara playing on your iPhone or old-school turntable, music as a doorway to self-discovery just can’t be denied.