Texas Book Festival 2019:
On the Topic of Mothers

Moderator Jill Meyers barely had to say a word to get this panel of writers going. They were, after all, all there to discuss their mothers.

Michele Filgate kicked it off by reading an unsparing excerpt from What My Mother and I Don’t Talk About, describing her mother’s allegiance to her husband (Filgate’s stepfather), who abused her while growing up. “I first wrote this essay, to deal with the anger I have for my stepfather,” says Filgate, “but then I realized it’s really about the fractured relationship I have with my mother.” There was a collective gasp in the room when she explains they are still married. 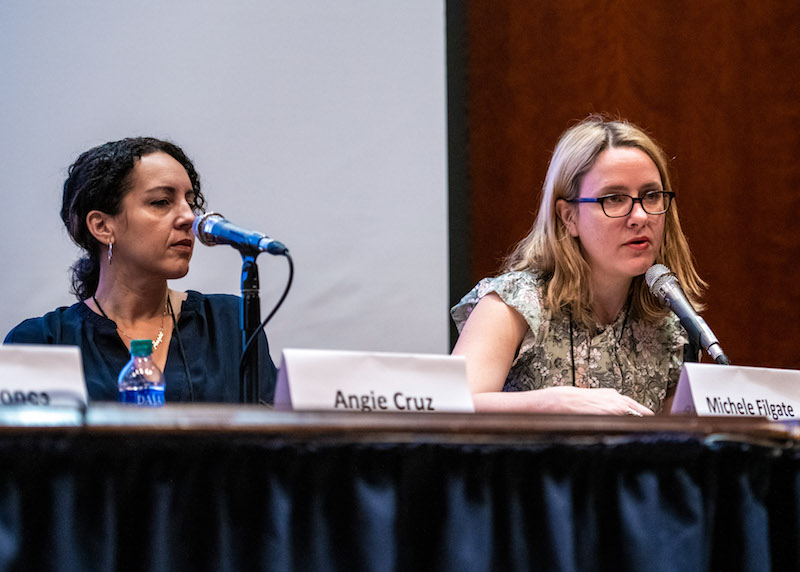 In Angie Cruz’s Dominicana, the novelist seeks to understand the mystery of her mother, who was a child bride in the Dominican Republic in the 1960s, and suffered years of domestic abuse before finding success later in life. Cruz is in awe of her mom, the hardships she has overcome, and wants badly to know who she is as a woman, but feels unable to do so. “My mother put her pain on a shelf in order to function,” she stated. “She won’t talk about what happened.” Cruz has chosen to fill in these blanks with fiction.

Poet Saeed Jones’ memoir How We Fight for Our Lives opens with a poem about his mother, the way she would dance around, “fingers snapping and snakes in her blood,” when a certain song came on, seemingly transported to another time, another version of herself, before ever having become a mother. Jones read his poem with power entangled in the pain of wanting to be loved by her. No doubt, wanting to be accepted in general, while growing up in Texas as a gay black man.

The panel went into overtime as the three authors rapidly round-robined about the complexity of these women, each depicted as multi-dimensional people rather than mythical beings meant only to exist in a singular role. Their mothers bore them, and in turn, they bore books about their mothers. Though it’s never nice to give away an ending, the last sentence of Jones’ memoir really does sum it up: “Our mothers are why we are here.”