Families form in unexpected ways that can define who we are.
Texas writer Oscar Cásares (Where We Come From) and debut novelist De’Shawn Charles Winslow (In West Mills) discussed that theme at play in their fictional worlds during the session On Second Look: Writing About Home From New Perspectives. 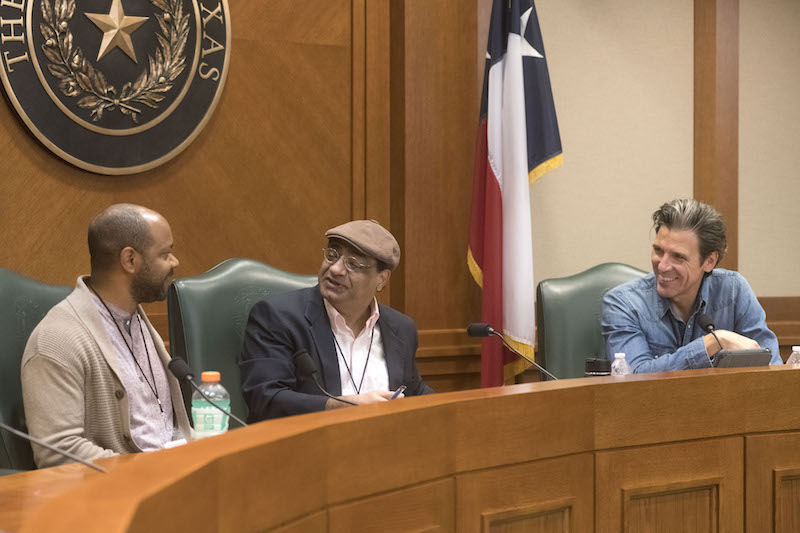 In Cásares' novel, 12-year-old Orly, a rich kid from Houston, is sent to Brownsville to stay with his godmother Nina, who is secretly harboring an illegal immigrant boy named Daniel in the small pink house out back. "I grew up watching my nieces and nephews come down from Houston with a very tentative connection to the Rio Grande Valley," Cásares said. Something similar happens in the novel. "He's going to see a part of his family he never knew existed." Nina "sees herself as Orly's spiritual guide and is afraid of disappointing him if she's caught. She's sitting on a time bomb. You can hear the urgency of that secret."

Winslow's novel, set in an African-American community in North Carolina, grew from memories of a town drunk. "I wanted to imagine her life before my family met her," he said. "I wanted to show the person beyond the addiction." That grew into the character Azalea "Knot" Centre, a school teacher with a drinking problem and how she finds her way with the help of a created family.

Both books come from an oral tradition of family. "I wanted to be true to the world in which I grew up," Winslow said. "The characters speak differently from each other to show class distinction. I didn't grow up as a reader. I grew up listening to people talk."

Cásares echoes that: "We're constantly surrounded by people who arrived here recently. We don't know their stories, so they get marginalized in a big way. What if I could give a peek – make them not marginalized but people?"