You could never accuse royal fans of being hothouse flowers. They scrounge behind-the-scenes details from all corners of the internet, build overnight encampments to catch a glimpse of a wedding, and defend their favorites, online and in person, with a rare ferocity.

Little surprise, then, that a pre-noon start time, limited space and a room in the far reaches of the Capitol Extension Building couldn’t dim the enthusiasm of the Jasmine Guillory and Casey McQuiston fans at Saturday’s Modern Royalty in Romance panel. 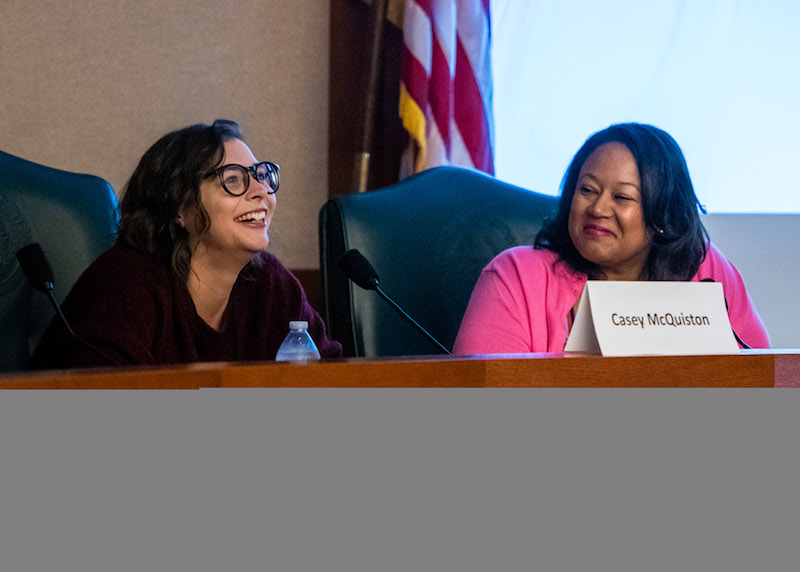 Moderated by the warm and extremely well-prepared Terry Wilson, the session managed to feel both prestigious (by the time the authors arrived, two minutes before the start, it was standing-room only) and as delightfully free and informal as a friends’ get-together (both authors seemed as game to talk about the royals in general as they were to discuss their novels).

“The origin of this story came from a tweet,” said Guillory, when asked about the inspiration behind her fourth and newest book, Royal Holiday. The tweet in question? One requesting that someone please write a romance based on Doria Ragland (Duchess of Sussex Meghan Markle’s mom) receiving an invitation from the Queen to Christmas at Sandringham. Guillory jokingly volunteered herself as tribute, but an overwhelmingly positive online response, decided to take on the project for real. The result, which follows Vivian, the mother of the heroine of Guillory’s third book, The Wedding Party, as she falls in love with Malcolm, Her Majesty’s first black private secretary. (Yes, Guillory confirmed later on in the session, you can go ahead and imagine Idris Elba in the role – he’s who she had in mind.)

Red, White & Royal Blue, which chronicles the romance between a prince of England and the First Son of the United States in a world where a woman very much like Texas Democrat Wendy Davis is president (ideally to be played by Connie Britton, if you’re keeping track of the authors’ fancasts), was born out of McQuiston’s fascination with the high profile worlds of both royalty and Presidential kids. “We see everything that they do and we see nothing that they do,” she said, regarding the tension between the super public and super private.

The sensitivity to what it’s like living under a microscope was something Guillory and McQuiston clearly shared. Midway through the session, at Wilson’s prompting, both authors firmly established themselves as Duchess of Sussex fans. “I don’t think it’s possible to be prepared for that much attention and that much criticism,” Guillory remarked, when the conversation veered toward the unrelentingly negative, often racist press coverage Markle has received. McQuiston agreed vehemently, offering “to fist-fight the Daily Mail” on the Duchess’ behalf. That sympathy was not all the two had in common. Both American authors writing about the British monarchy, they discussed the U.S. preoccupation with royalty as fairy tale fodder (Guillory: “When you think about it, the idea of royalty is ridiculous.”) and the exacting eyes of English readers (McQuiston, giving voice to disgruntled Brits in her Twitter mentions: “The prince would never say, ‘Oi!’”).

As the session came to a close, their camaraderie shone brighter than ever. When Wilson asked them to pick a royal, living or dead, to have dinner with, they each had prompt answers (Meghan for Guillory, Diana for McQuiston, since she didn’t want to repeat Guillory’s pick), but then continued to riff on what it would be like to hang out with other Windsors. Camilla “would have a big glass of wine that would never go down,” Guillory hypothesized. Drinks with Harry would obviously be beer-centric and “I can bro down,” McQuiston said. The attentiveness and enthusiasm of the crowd made it clear that everyone would be more than delighted to tag along on these royal adventures, as well as any literary ones in Guillory and McQuiston’s futures.