Eleanor Davis' graphic novel centers on a woman who's trying

It would be nice, wouldn’t it, to grow up in something other than a wantonly industrialized nation that’s rapidly becoming a police state? It’d be a fine, true, life-enriching thing, and it’s easier to imagine it now because we’re still nearer to the beginning of the militarizing process than are the people in Eleanor Davis’ The Hard Tomorrow. This new graphic novel by the author of How to Be Happy and You & a Bike & a Road isn’t set in any far-flung sci-fi dystopia, though. The Hard Tomorrow’s events unfold a mere three or so years in our future – or, in any case, a future. It’s a future in which crackdowns on political protests have increased beyond our current already-fraught situation … as commanded, it seems, by the administration of a certain President Zuckerberg.

That’s only background, though. That’s the harshening frame that contains the story of Hannah, a young woman who’s trying. Trying to survive, with as much humanity and joy as possible, in this contentious near-future milieu. Trying to get pregnant with her husband Johnny, who lives with her in a camper out in the woods. Trying to fight the fascist powers-that-be with her comrades in the Humans Against All Violence group. Trying to make a living serving as part-time caretaker to a dying old woman. Trying to contain the intensity of her love for her friend and sister-in-struggle Gabby.

And, since The Hard Tomorrow is a work of sequential art, you’ll want to know about the visuals that are part of what communicates this rich and often tense, sometimes (gently or darkly) funny, narrative. If you’re unfamiliar with Davis’ stuff, you might wonder: Can this woman draw? But you can see the book’s cover right here. Or you can click a few times on your screen and catch other glimpses of what Eleanor Davis can do in black-and-white, with pen and ink – glimpses of the sort of work gorgeously reproduced in this new hardcover from Drawn & Quarterly.

Or, listen: “Nobody draws like Davis. Get used to it. I sure had to.” When you know that that comment, with its note of professional envy, comes from a maestro like Jaime Hernandez – well, 'nuff said.

Eleanor Davis will appear with authors Kimi Eisele (The Lightest Object in the Universe and Erika Swyler (Light From Other Stars) in the Texas Book Festival session "For the Greater Good: Fiction of Community" on Sun., Oct. 27, 2:15pm, in Capitol Ext. Rm. E2.010. For more information, visit www.texasbookfestival.org. 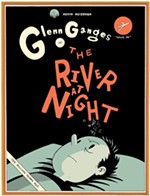 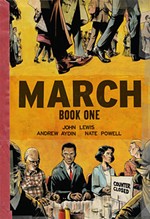