With the very first notes of the 50th Anniversary touring production of Jesus Christ Superstar – that sinuous, ominous electric guitar line from "This Jesus Must Die," slithering like the serpent through Eden – the air in Bass Concert Hall was charged. Not from a nostalgia reflex, but because it asserted this JCS was live – and alive. 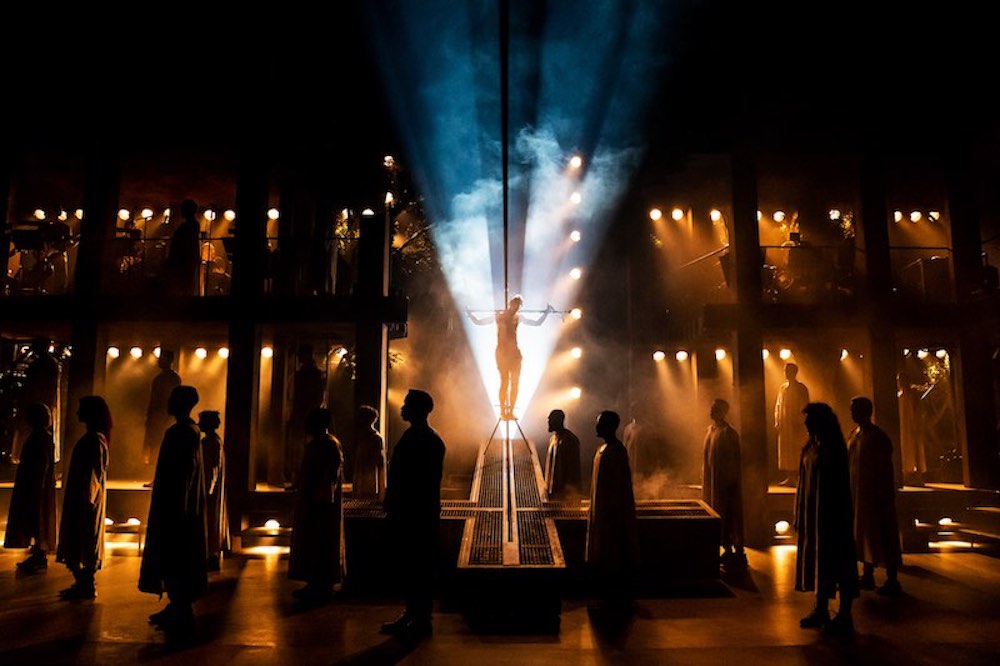 With any music that you've come to know primarily through recordings, just hearing it "live" – produced in the moment, in the space where you are – can heighten your response to it, juice it with an electricity you might not typically feel. Still, that's no guarantee that the music will come to life in the way that it did after who knows how many takes in the studio, made over time and carefully burnished during the production process. Indeed, the more polished the recording and the more familiar listeners have become with the music through its perfected performance, the greater the challenge for a live performance to also be a-live.

In the case of Jesus Christ Superstar, any live performance must withstand measure to the Brown Album, that very first recording of the Andrew Lloyd Webber-Tim Rice rock opera that caught lightning in a vinyl bottle. For many fans, it was their entry point to the work and remains the standard, if not the definitive, sound of it. In the decades since its 1970 debut, Superstar has been produced countless times – on stage, screen, and television; on Broadway, in the West End, and in professional theatres across the world; and also in community theatres, schools, and, despite controversies around it, yes, churches – adding to the burden of breathing life into any new production.

The new North American touring version rises to the challenge by getting back to the concept album's roots, as concert rather than stage play. Building on the acclaimed 2016 revival at the Regent's Park Open Air Theatre in London, the production fully embraces the atmosphere and accoutrements of the rock show. The major set piece is a runway in the shape of a cross. As a matter of course, the performers sing into handheld and standing mics, with stands frequently doubling as props – standards, spears, even the cross Christ is crucified on. Musical instruments are carried throughout, on which cast members accompany themselves and others. Dozens of high-tech lights illuminate the stage, with drifting fog concentrating diffuse beams into blazing shafts. Glitter becomes the surprising – and shocking – vehicle through which we witness the impact of the 39 lashes on Jesus. Every element of the rock show brings with it the energy we associate with that high-voltage event, and also the sense of celebrity ingrained in it, the mesmerizing allure of the charismatic, the famous, the larger than life. There's a reason that Webber and Rice put "Superstar" after Jesus' name here and built a song around his status as such; it's to connect the power and the pull of this distant biblical figure, more divinity than man, the capital-S Savior and capital-L Lord, into someone we could recognize from our world, our time. 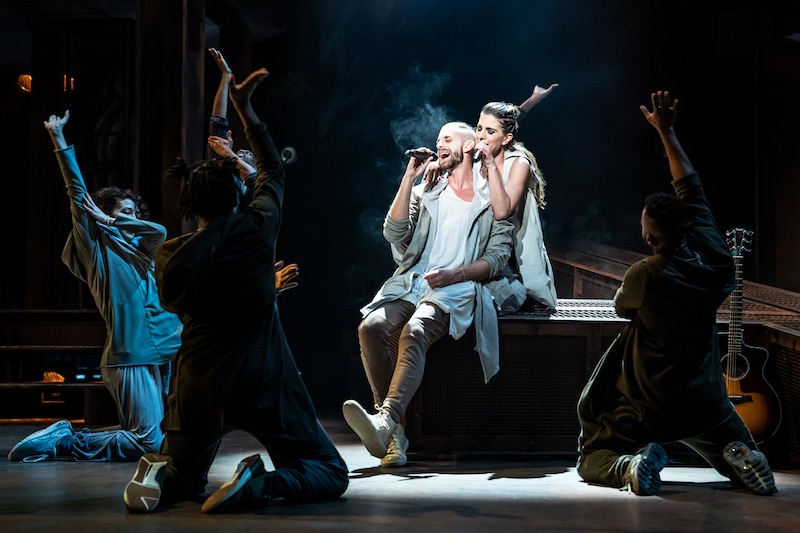 This Superstar gets that and delivers it with the immediacy and urgency of breaking news. The work has always given us a view of the Passion from the street, less concerned with the heavenly ramifications of Christ's fulfillment of prophecy – in brief, John 3:16 – than with what happens on Earth, among the people around Jesus, who are grounded in a specific place and time and unaware how his story will play out, and in the legacy of Christianity as critiqued by Judas in the afterlife. Everything that's said, everything that's sung, is about Jesus as viewed from a human perspective: as a friend, as an inspiration, as a threat. That's clear just listening to a recording of Jesus Christ Superstar.

But the effect of this human POV is magnified when we also see the way Judas and Mary Magdalene look at Jesus and interact with him, when we see Caiaphas and Annas sneer as they dismiss Jesus as one more wannabe Messiah, when we see Pilate visibly unnerved by this uncooperative, enigmatic prisoner before him. In the staging by Timothy Sheader, this story becomes a headlong rush toward a fate for Jesus not dictated by divine destiny but by a confluence of human events: the Roman occupation, Jewish opposition, political maneuverings on both sides, Jesus' growing popularity and reputation, and a populace that changes its opinion of him with a shift in the wind. Absent an intermission, the show hurtles forward, racing toward tragedy with no opportunity to stop it. A sense of danger pervades this Superstar, more than any other version I can recall. 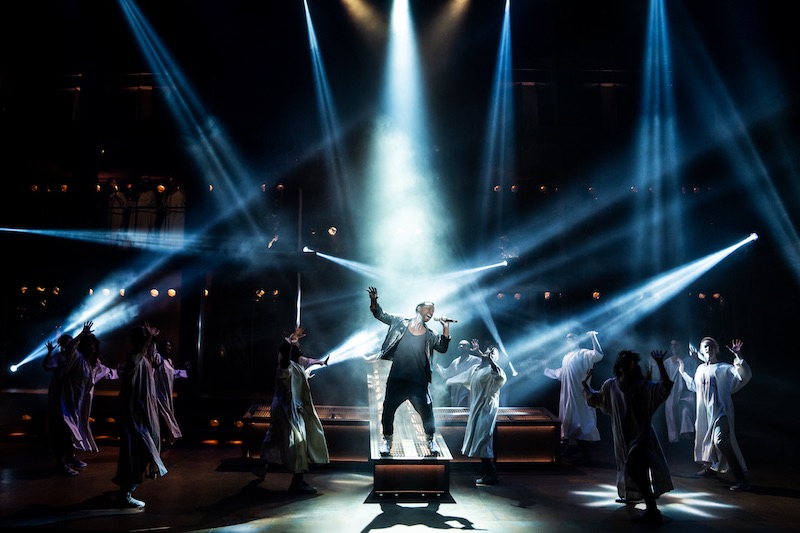 But we wouldn't feel danger if the figures we're watching weren't human and thus vulnerable. As Judas, the character we hear from most, James Delisco Beeks comes from a place of concern, his "Heaven on Their Minds" not the tirade heard in some productions but an urgent effort to wake up his friend, this man who's done so much good, before it's too late. When he sings, "We are occupied; have you forgotten how down we are?" the anxiety of the oppression he knows bleeds through. (And the representation of the Romans with full-face masks drawn from classical statuary creates a creepy image of a surveillance state.) In "Superstar," when he sings, "I don't understand why you let the things you did get so out of hand," his emphasis on the word "why" colors the lyric with a special ache of bewilderment. You hear something like it in Jenna Rubaii when she sings "I Don't Know How to Love Him." "What's it all about?" is no rhetorical question but a sincere query; she's lost in a mystery with this man Jesus. Aaron LaVigne allows his Jesus just enough distance to be mysterious, but he's also a figure of flesh and blood, his rebuke to Judas in "Everything's Alright" ringing with a soulful passion, and his repeated protestations that he's "tried for three years, seems like thirty" are weighted with weariness.

We know what's coming for this man who's "sad and tired," and yet this Superstar never leans into our familiarity with his fate. The confrontations with Pilate – Tommy Sherlock powerfully flips from fearfulness to fury – and Herod – Paul Louis Lessard, flamboyant but also genuinely menacing – and the scourging of Jesus are taut with tension, as if somehow the outcomes aren't predetermined. And even with Jesus hung on crossed mic stands, the crucifixion has a raw power. We reach the bloody end for this Nazarene, and what's it all about? In this case, it's about a story we know made fresh and personal and immediate. It's about what all such stories are ultimately about: being alive.