This Week on The Austin Chronicle Show: Abbott Threatens Austin With the Hammer Again

Plus: Why the land-use code matters, and previewing Staple!

This week on The Austin Chronicle Show, we tackle the land development code revision, comic books, and the governor's continuing threats to override Austin's elected officials.

By now we’re pretty used to Governor Greg Abbott’s disdain for Austin – remember his charming tweet that "Texas will hammer Travis County”? Welp, he’s got his hammer out again. This time, he’s inserting himself into the middle of the city’s debate over the recent decriminalization of homelessness – which the governor has unhelpfully shorthanded to “Austin’s policy of allowing the homeless to do whatever they want.” Abbott is threatening to take action if city officials don’t “clean up the streets” to his liking by his own self-imposed Nov. 1 deadline. City Hall reporter Austin Sanders dives into this issue, as well as gives his analysis of the newly released first draft of a new land development code revision, the first attempt at one since Mayor Adler pulled the plug on previous effort CodeNEXT last year.

In the second half of the show, Arts Listings editor Wayne Alan Brenner takes over the mic to chat up “Uncle Staple,” the mastermind behind Staple! Expo, the annual get-together celebrating indie comics, games, arts & crafts, and more, which takes place this weekend at the Millennium Youth Entertainment Complex.

School Closures and Racism at APD
Also: What to watch in movie theatres Thanksgiving Day 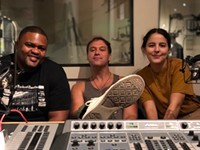