Meyer & Hislope, Hislope & Meyer: They’re back and they’re bound to set something on fire. 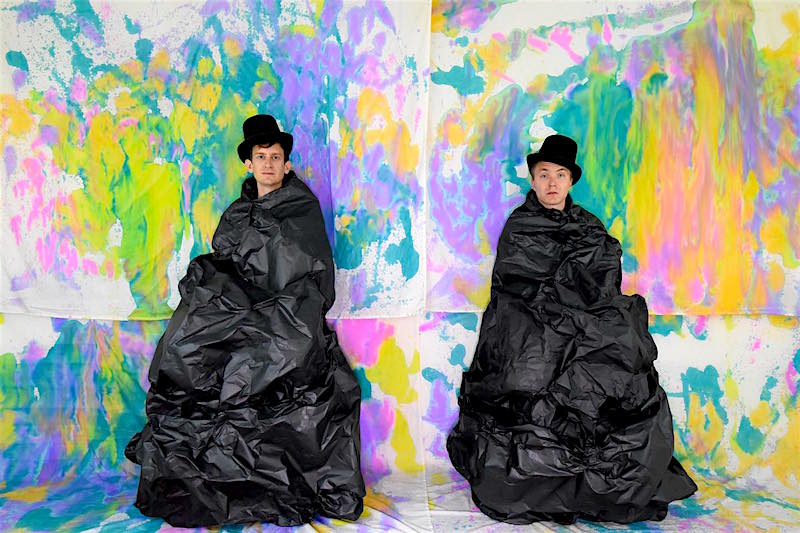 Josh Meyer and Matt Hislope – that talented Mutt-and-Jeffish duo behind the Rubber Repertory theatre company whose theatrical provocations and audience-immersive events made Austin a more exciting place to be in the early 2000s – have finally, after an absence of six years, returned to our delightful, contentious, beautiful, overpriced, traffic-clogged, rapidly metastasizing, and still-undeniably-weird-in-parts city.

They’ve been here since July. They’ve got an apartment. They’ve secured gainful employment. They’re already in a theatrical production that’s making excellent use of their prodigious and varied skills.

How did this happen?

After leaving Austin at more or less the same time in 2013 … and then renting a former church in Lawrence, Kansas, and turning that space into a temporary artist colony called the Pilot Balloon House … and then Josh going to endure the working-actor grind in L.A. and Matt jetting overseas to be a cast member at Disneyland China … and then the both of them uncomfortably haunting Los Angeles after their enthusiasm for the modern ruins of Hollywood dissipated … what led them back to Texas, to Austin, to the local scene?

Matt Hislope: I just, uh … there ceased to be any reason for me to be in Los Angeles. And we, ah, wanted to get back to a place where we had a sense of community again. Which I know I felt like I was lacking.

Josh Meyer: I was kind of in the same place. A lot of the commercial work I’d been doing has gone non-union in the last few years, so that kind of dried up. I found myself working in a theme park, saying the same catchphrase about 500 times a day. It was a fascinating world to be in, for a year. And I always thought it was the kind of place where people would work on a more short-term basis as performers? But they have people who’ve been there decades. One of the other people playing my same character has been there since 1997. And they have Draculas on their fourth decade.

Matt: I also worked for theme parks, and I was working at a brand-new park – in China. But now, it’s a few years later, and I left, but it seemed that many people were sticking around.

Austin Chronicle: And then you moved to L.A., too. And L.A. didn’t work out for either of y’all …

Josh: Well, I wouldn’t say it didn’t work out.

Austin Chronicle: What had y’all been expecting, if anything, that you didn’t find?

Josh: I think I had the experience I wanted to have in L.A. I don’t know that I ever imagined spending the rest of my life there, but I liked living in a big, world-class city and experiencing the, well, you know, it’s a place that takes a long time to get to know. It’s very inexhaustible, and I loved exploring there for six years. And, while it lasted, I liked being able to support myself as an actor.

Matt: For me, the second round in Los Angeles, I really loved living there. But I gave myself a kind of deadline that I went way over. After my theme park experience in China, all my auditions for similar kinds of jobs were in L.A., and after going to those auditions – every single one of them – after a while it was quite clear that that was not going to work out. And, aside from that, there wasn’t any real reason for me to be there. And then, when Josh was thinking of getting out, there was no question that I would follow suit.