Get ready to welcome a new executive director to Texas Performing Arts. Today, the University of Texas at Austin College of Fine Arts announced its pick to lead the performing arts presenter, and he comes with not just extensive experience with new work – 100-plus pieces of theatre, dance, and classical music – but a Tony Award for one of them. Bob Bursey is his name, and for the past seven years he's been directing the Richard B. Fisher Center for Performing Arts at Bard College, where he helped shepherd a student production of Oklahoma! all the way to Broadway, and the show won the award for best revival of a musical this year. Other programming at the center, such as the Bard Music Festival and the premiere of choreographer Pam Tanowitz's Four Quartets, have earned superlative praise from leading media outlets, including The New York Times and The Wall Street Journal. And during Bursey's tenure, the center has doubled annual attendance, erased a seven-figure deficit, instituted new programs for artist residencies and commissions of new work, and started a $5 student ticket fund.

With that kind of résumé, you can understand why COFA Dean Doug Dempster has said, “We’re enormously excited to welcome Bob Bursey to the university and Austin." In the press release announcing the hire, Dempster goes on to say that Bursey "proved himself a strategic, resourceful director in a tough, risky environment for cultural organizations” and "attracted national and international attention for his work on imaginative festivals and original commissions.” No doubt UT is counting on Bursey's imagination and resourcefulness to bring some of that national and international attention down to the 40 Acres.

For his part, Bursey says in the release that he is "thrilled to work with Texas’ extraordinary faculty, staff, students, and Austin’s vibrant arts community to foster an essential hub for creating and experiencing live performance.” The Chronicle reached out to Bursey in hopes on getting him to elaborate on his decision to come to UT and what plans he might have for TPA. Despite it being the Labor Day weekend, he was kind enough to answer our email.

Austin Chronicle: Given your track record with the Fisher Center and Bard's proximity to New York City, what was the draw to a huge public university in the middle of Texas?

Bob Bursey: Those characteristics – that it’s large and public – are significant draws for me. The folks at UT like to say that the university is first class because it’s public. I think there is something to that. Through its student body, a large public institution like UT can contain the broad range of American cultural concerns and experiences, and point the way to the future. How might TPA reflect that range of voices and stories? What makes it relevant in 2020 and beyond? To me, it's an exciting opportunity.

I'm interested in activating the things that the arts do uniquely well – spark curiosity, create conversations across divides, push against traditional bounds, apply creativity to intractable problems, and so much more – at the scale at which UT operates. Personally, the arts have been and continue to be the way that my horizons have grown and that I try to understand the world. I am curious about how that opportunity can be made available more broadly. The goal is to create the most vibrant example of what a performing arts program within a flagship university can be in the 21st century.

And there is a personal dimension to it as well. My wife – [dance educator Leah Cox] – grew up in Texas and we have family there. We have young children and are ready to be rooted somewhere that we feel we can make a contribution while raising our family. We have both built our careers in New York over the past 20+ years, and are excited for the change.

AC: The College of Fine Arts performance facilities are hitting their 40s and showing their age. Do you see that as a challenge in directing the TPA, and if so, how do you foresee meeting that particular challenge?

BB: I see it as an opportunity to help define the next chapter for some of the country’s most significant cultural spaces. Keeping up facilities is a challenge for every arts organization that owns or maintains its own buildings, and as a field it’s something most organizations are under-resourced to do. I have led several facility renovation and upgrade projects over the years, and when those projects work really well they create new possibilities for artists and audiences and a renewed sense of pride in our spaces. Right now, I’m learning what TPA's facilities needs are. There is some good groundwork already in place that we’ll be building on.

AC: Your successes at the Fisher Center are admirable. Are there any of those – like the $5 student ticket fund, commissions of new works, artist residencies – that you'd like to bring to UT or expand on here?

BB: I’ve seen that situations where visiting artists, faculty, and students work side-by-side – be it in the context of new work creation, residency, or teaching – can be incredibly powerful. At the Fisher Center, something we’ve done very well is create unique projects that garner considerable attention and often relate to the issues of our time in some way. At UT, folks express that type of thinking as "what starts here changes the world." That seems like a good guiding principle for TPA going forward.

AC: Lastly, you mention in the press release being thrilled to work with both the UT faculty, students, and staff and Austin's vibrant arts community. Do you have a sense of the local arts scene and how it might be better integrated into the educational environment at UT?

BB: Student engagement is already a strong point for TPA that can be amplified. Another of TPA’s unique traits is that it’s a big tent – the range of artistic practices happening there is broader and less inhibited than in many arts organizations. That spirit of inclusion I think can extend to supporting student learning, faculty research, and the local artistic community in different ways. A creative, connected, and effective organization's value can emanate concentrically – from the campus, to the local community, the region, the state, nationally, and internationally.

I believe that a local arts community is an ecosystem. There is interdependence and interchange between organizations of all sizes, artists, audiences, supporters, the press, and many others. I have a lot to learn about how the ecosystem works in Austin, and will be asking how TPA can be helpful, as it should be an essential part of the ecology.

Bursey succeeds Kathy Panoff, who took over as TPA director in August 2009. Her tenure at TPA was distinguished by attention to new work, especially new music, which she was able to develop in part with a three-year, $450,000 grant from the Mellon Foundation that enabled TPA to commission new works from Pulitzer Prize winner Kevin Puts, UT faculty member Dan Welcher, and New York-based composer Nico Muhly, as well as fund residencies for eighth blackbird, So Percussion, and Brooklyn Rider. That was boosted in 2014 by another $400K from the Mellon to support classical music presentation, and in 2018, Mellon provided $500K to support a three-year series of performances, residencies, and community conversations around "The Power of Protest: Art and Civil Disobedience." Under Panoff, TPA also partnered with Fusebox Festival on important projects such as Mozart Requiem Undead and Sound in Sculpture.

Bursey takes over as director Jan. 1, 2020, with his first slate of programming being the 2020-21 season. He'll also serve as an associate professor of practice in the College of Fine Arts, and his wife, Leah Cox, will teach in the Department of Theatre & Dance. 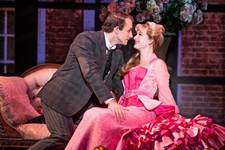 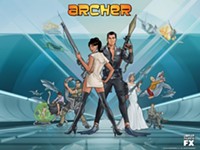