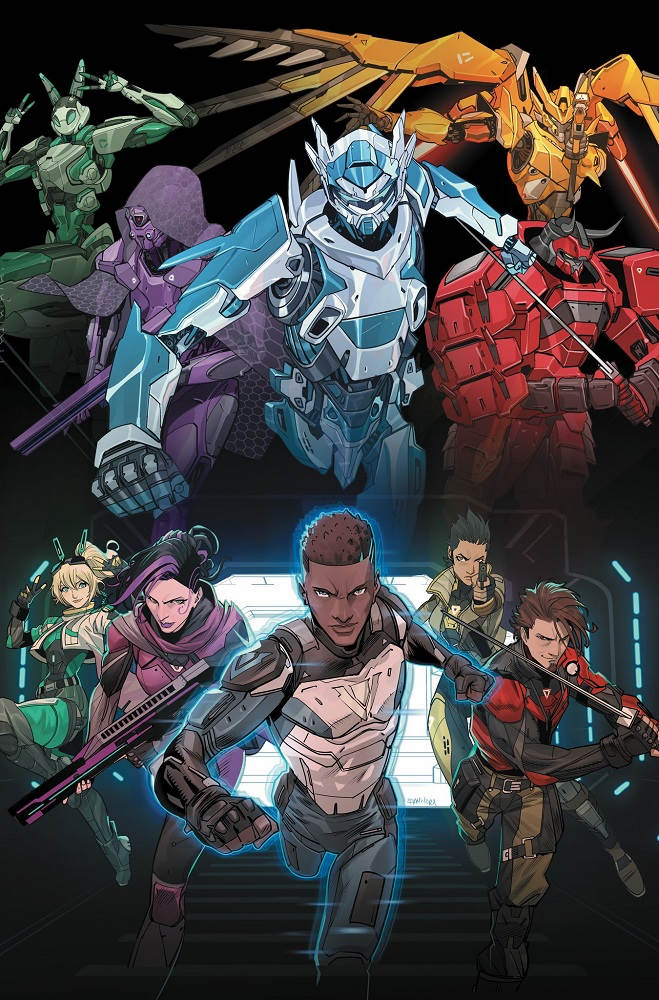 Cover art for the DC Comics' spin-off of gen:LOCK, Austin-based studio Rooster Teeth's animated series which is coming to Toonami on Adult Swim next month
Friday's big announcement at RTX, the annual gathering of fans of Austin-based Rooster Teeth, was that the studio's fighting robot anime gen:LOCK is getting a spin-off comic. Back-to-back panels Sunday morning added more details, plus major news that the show heads to Adult Swim's Toonami strand, starting Aug. 3.

The gen:LOCK loyalists were out in force in Hall 1 of the Convention Center for the series-specific panel. Unfortunately, they didn't get the one piece of news that they were really hoping for, as there was no confirmation of a season two. That doesn't mean it won't happen, per producer Sean Murphy, but it's not in active development currently (in part, no doubt, due to the ongoing restructuring of RT's animation division).

When the announcement is ready, the fans will be there in droves, as indicated by the amount of gen:LOCK cosplay on the floor, and the rate of merchandise sales. Even the convention limited edition hoodie was sold out and, as producer/series star Miles Luna noted, "The fact that anyone would walk up to a Hoodie in the Texas summer and go, 'I want that,' is insane" - to which series writer Evan Narcisse replied "Not even the Texas winter."

But even without any word on more episodes, there was still plenty to keep the faithful happy.

• Friday came the word that, starting in September, DC Comics will be publishing bi-weekly episodes online of the gen:LOCK comic, which will then be collected in print issues. The book will be written by Collin Kelly and Jackson Lanzing, who are most famous at DC for Green Arrow, Nightwing, and Gotham City Garage. However, Narcisse (who is both a comic critic and writer, having penned Marvel's Rise of the Black Panther) said he had been a fan of their work since they wrote Joyride for Boom! Studios. "When I found out that these guys were handling the comic duties, I was really excited."

• Narcisse added that the comics will be seeing more of the wider world. "It's definitely going to provide a different perspective on the world of gen:LOCK and the characters."

• But wider how? Fans had to attend the dedicated DC x Rooster Teeth panel for more on the title from Lanzing and Kelly, who confirmed that it will take place after the events of season one. The show will also switch locations to Japan for an opening story line called "Siege," which will see the team and their giant robots, or Holon, join the forces defending the island nation. This could be a difficult homecoming for Kazu Iida (voiced in the series by Kōichi Yamadera), who left on not the best terms. The run will also deal with the varying attitudes of Cammie (Maisie Williams) and Chase (Michael B. Jordan) to online life in the VR environment known as the Ether. Also look for more on the genesis of the gen:LOCK program itself.

• That's not the only print news. No details or visuals yet, but Luna announced there will be a series art book and manga coming from anime experts Viz Media.

• But what about that big jump to TV? Season one will arrive on Adult Swim on August 3, and there will be a Blu-ray and DVD release that will include out-takes. As Luna pointed out, those are very rare in CG animation, as show, as they are expensive to produce, then dump, and so are usually excised at the script stage.

• And last but not least, gen:LOCK will be eligible for this year's Emmys, and "for your consideration" packages are being sent out now.