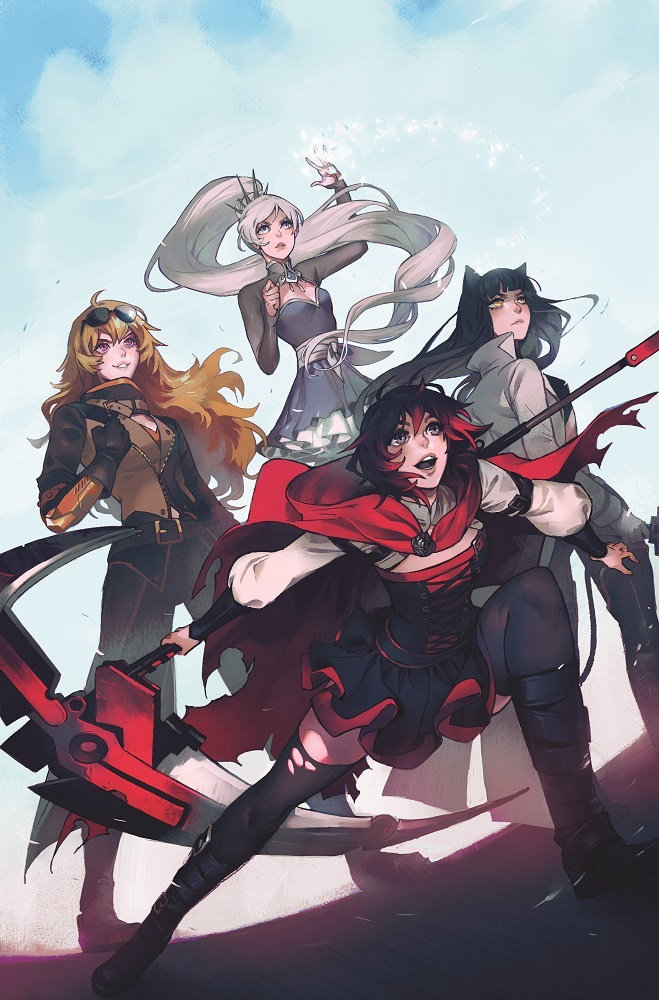 It's RTX weekend, the annual celebration of Austin's Rooster Teeth, and the online studio kicked off its first panel with a massive unveiling - confirmation of the creative teams for its new comics adaptations coming from DC for its smash hit series gen:LOCK and RWBY, plus cover art for RWBY.

There have already been Japanese manga for breakout American anime RWBY, but the DC comic will be raiding the talents of DC Bombshells series with writer Marguerite Bennett (Batwoman) and artist Mirka Anolfo (Hex Wives, Wonder Woman) being joined by Deathstroke colorist Arif Prianto, as they bring the world of Remnant to print in the show's first original American title.

Making the announcement to the RWBY fanbase, Bennett wrote, "RWBY is the kind of story I wish passionately that I had had growing up - magic, mayhem, monsters, and friendship between girls who grapple with real struggles and grow together to become stronger, brighter, kinder, and better. It's a joy to work on this project, a joy to be part of this mythology - I've fallen deliriously in love with the whole mad world and all the mysteries in it. I am so delighted to explore with Ruby, Weiss, Blake, and Yang - and with all of you."

DC and RT also confirmed the creative team for the gen:LOCK comic, spinning off from their giant fighting robots/future conspiracy theory series, as voiced by A-list talent including David Tennant, Maisie Williams, Asia Kate Dillon, and Michael B. Jordan. This will be overseen by the co-writing team of Collin Kelly and Jackson Lanzing, who previously collaborated on Green Arrow, Nightwing, and Gotham City Garage - a possible indication of a suitably gritty tone for the comic - and art by Carlo Barbieri (Green Lantern, Adventures of Super Sons).

In a joint statement, Kelly and Lanzing wrote, "Giant mechas, heartfelt drama, and a whole new theater of war - we're deeply excited to be telling the next chapter of the gen:LOCK universe. Huge thanks to everyone at Rooster Teeth & DC for recruiting us into this grand experiment - we promise to turn the screws on Chase, Cammie, Kazu, Val, and Yaz as they face an uncertain future and a devastating new threat."

The RWBY comic will be available digitally in August, then gen:LOCK will follow in September. They will then alternate weekly publication, with two chapters for each monthly, and then the titles will be collected as monthly print issues. And for fans of the Nineties comic revolution, there will be special issue one variant covers by Jim Lee (X-Men, Batman).

Expect further news about both titles at the DC Comics x RT panel at noon on Sunday at RTX. Details and info at www.rtxevent.com.