You hear the one about the Irishman who was so depressed that he might as well just feckin’ kill himself and get it over with? 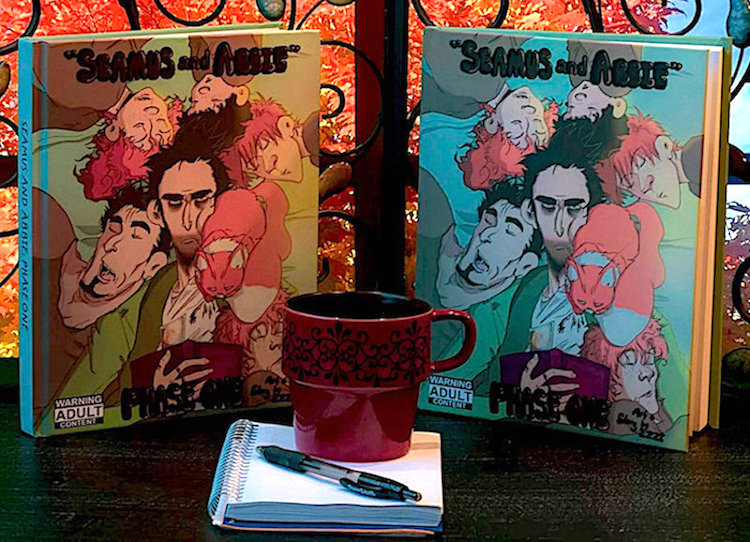 One for you, one for a friend.

Yeah, except he’s not suicidal, precisely, and it’s not a joke. He’s just really feckin’ depressed – that’s how his brain works, currently, and the condition’s amplified by the violent death of his father and a break-up with the love of his life – and he’s trying to carry on, regardless, with the help (or maybe intrusions) of his large remaining family, his friends, and, most constantly, his cat Abigail.

Of course, the cat’s a bit depressed, herself.

Meet Seamus O’Doherty, the lanky and long-suffering protagonist of Seamus and Abbie, the first hardcover collection of the webcomic series by Austin’s Izzi Ross.

“It’s not a joke,” we say, but the narrative is smack dab in the comic book milieu, and so the beginning of Ross’ limning of character is initially structured like the panels of a Sunday funnies section – albeit a decidedly more adult, more raunchy version than the sort of stuff you’d see in one of those paper-based newsthings back in the day. Also, here’s another treat: The gags, character-based and redolent of the best sitcom tropes, are actually funny, landing at least an amused smirk if not always an outright laugh, and always adding another increment or two of context – to Seamus, to the members of his family, to his history and theirs.

As the exploration of this depressed and goateed Dubliner progresses, so too does the presenting format itself, the single-page gags expanding to multipage vignettes, the artist’s drawing style – already impressive in that engaging indie comics way – refining itself to match the demands of depiction, the depths of story. And, after the beginning’s however-many-hoots-per-page, the narrative does shift to more subtle drama and takes on a lovely, compelling depth. It’s especially impressive, the perspective of this Seamus O’Doherty on display, as it’s so well rendered by a 24-year-old woman who’s not depressive, who’s never been to Ireland, who is, in fact, a native of Montgomery, Alabama.

“It was hard to put myself in the mindset of a 34-year-old Irish guy,” says the author. “But – I don’t wanna say I’m fortunate – but I have a lot of friends around me who suffer from depression. Including the person I was with romantically at the time I started the comic. So, I don’t wanna make it seem like I’m all creepy, like he was my case study or anything like that, but he and my other friends helped me realize that you can have depression but it doesn’t define who you are. So this guy Seamus happens to have it, but it doesn’t define him.”

And what defines a webcomic? That it’s initially posted on the web? That’s the only valid demarcation here, as this compilation of three years’ work, successfully crowdfunded via Indiegogo, looks like it came straight from the author’s drawing board and onto the 160-plus pages of hardcovered sequential-art excellence. We recommend it for all lovers of comics, for those who’ve dealt with depression or know anyone who has, who like well-wrought and sometimes giggle-inducing tales of what an academic might call interpersonal dynamics but which the rest of us know as simply being part of a family and a community … even if we’re some depressed, heartbroken Irish fucker and his cat.

We also reckon that you might like to know a bit about this up-and-coming author, too – and your Austin Chronicle is here for you, friend, with a recent interview conducted at that tasty Sa-Ten coffeehouse on Airport Boulevard:

Austin Chronicle: Okay, so … you’re not Irish, you’re from Montgomery, Alabama. Which, who could tell? Where’s your accent?

Austin Chronicle: And you’re not a comic book character, but you draw them. That’s gotta also require some training?

Izzi Ross: When I started trying to draw professionally – from age 17 on – I was really anime- and manga-based, which I don’t know if that seems odd to you?

Austin Chronicle: It does, because there’s not much indication of that in your style – and usually that sort of thing is overwhelming.

Izzi Ross: Well, I had these two comics I was doing at the time, and usually my style is more detailed and colored and all out there. But when I moved to Austin I realized I needed to have a job along with creating comics, that I couldn’t just stay in my room 24/7 although I wanted to. And I was like, “Okay, I need something quick, and I want to challenge myself and not just stick to anime and manga style.” So I thought of this Irish character that I did on and off throughout my, uh, my teenagehood. So I just picked him out of my brain, knowing nothing of Irish culture, so, yeah – let’s go with that. And straightaway I dropped my manga style and did a Sunday-paper like thing that I could do two or three of at a time, each night before I had to go back to work. And, funnily enough, my best friend moved to Ireland while I was making the comic – and now she helps me with all the cultural aspects of it. So it started out as a little side project that I was just gonna do real quick, and it just evolved from there.

Austin Chronicle: Did you move here for college, or –

Izzi Ross: I did a year of college at an art institute before I moved here. It wasn’t what I wanted, because it wasn’t one of those universities like SCAD where you can major in a prominent division of art – like Sequential Art, which is what I wanted to do – so I did drawing and still lives, and it wasn’t what I wanted. And my dad said, “Hey, I have an empty house in Austin. You wanna be a comic artist, you could move in there and just do comics and that’ll be it.”

Austin Chronicle: Ah, fuck, I think I had the wrong father.

Austin Chronicle: Well, okay then – social equity! And now here you are, living in Austin, doing these comics about an Irish guy who’s depressed, who’s got depression but it doesn’t – as you say – define him.

Izzi Ross: Yeah, at first I was like this advocate for, you know, “Depression is horrible! But it doesn’t define you!” And I made that like my big mission statement. But then I thought, why am I even doing that? I was kind of defeating the whole purpose of the character. And I’ve always, since I was young, loved stories that have a real emotional heart, a real impact. Like, if I watch a movie and I don’t cry my eyes out and really feel for the character and wanna know more about them, then it’s not gonna be one of my favorite movies. I’ve always been like that.

Austin Chronicle: You’ve certainly explored a real emotional heart with Seamus in this first book. So what comes next? You’re not just gonna leave him, and your readers, hanging?

Izzi Ross: I’m on Phase Two now. Phase One was technically Volume One, Chapter One. And Phase Two will be the last one about Seamus – and it’s gonna be way longer. When I looked backed – it’s been online for five years – I realized how short the first one was. I really didn’t have that much material, because I wasn’t expecting it to go the way it went. Later on, near the middle of the comic, you realize that Seamus actually has a story that takes up pages instead of just this four-panel, one-page thing. So for Phase Two, it’s gonna be his story story. You’re gonna see that he used to be a fun guy, he used to have friends and a life before this depressive state that we saw from the get-go. And then that’ll be it for Seamus – but it’ll take a while to finish.

Austin Chronicle: And then?

Izzi Ross: Well, I might wanna go back to my more detailed comic route, maybe explore some sci-fi or fantasy. I love slice-of-life stuff, but I’m really more of a sci-fi gal. But I will miss Seamus, because I feel almost like he’s a part of me at this point – and he’s gotten so much great feedback from my readers on the webcomic platforms. It’s gonna be a bitch to say goodbye, but there’s a clear ending in my head: I’ve had it for two years, I just haven’t been able to put it on paper yet. But I will.