When Austin’s Rude Mechs debuted their stage adaptation of Greil Marcus’ era-hopping, punk-culture exploration Lipstick Traces back in 1999, it wasn’t their first show. 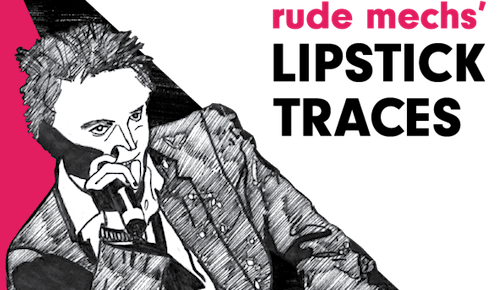 Hell, it wasn’t even their second or third or – listen: The Rudes had done some pretty fierce shit before, and everybody in this town’s theatre scene knew it.

But, with Lipstick Traces, they created a phenomenon that transcended the local performance community’s tightly knit matrix, that commanded sell-out crowds night after night and impressed jaded critics (and made author Marcus very happy indeed) and eventually reaped a fine harvest of national and, to some extent, global acclaim. Which acclaim continues, regardless of other kudos and positive critiques for all the equally innovative and enjoyable shows that those Rudes have followed Lipstick Traces with over the past two decades.

So why do they have to go and make a graphic novel out of the thing now?

And not “they,” really, but co-producing artistic director Lana Lesley – as if she’s got nothing but spare time? As if the endless duties of writing and rehearsing and touring and performing and, you know, co-producing year after year leave a woman wondering, “Gosh, why am I never busy?”

We wondered about this (although our own position was mostly, “we don’t care why, really, just please take our money”), and we thought you might like to know as well. So we sewed a fresh arts-journalist patch into the skin of our upper chest – blood everywhere, it was messy AF – and asked that Lana directly.

Austin Chronicle: What inspired you to create a graphic novel version of the Rude Mechs' groundbreaking Lipstick Traces?

Lana Lesley: Rude Mechs was approached by 53rd State Press forever ago about publishing some of our plays. We picked Lipstick Traces, Requiem for Tesla, and The Method Gun. We, each of the artistic directors, agreed to be responsible for a write-up about each one – something that would reflect the collaborative nature of the creation and the process. I was responsible for Lipstick Traces. Around April 2015, I started really thinking about how just reading the play text doesn't give any sense of the world of the play, its energy, its design, its direction, its performance – and each of those elements are an important part of the play's creation. I decided the print form closest to what we created would be a grimy DIY graphic novel. I looked around, for a heartbeat, for artists here in Austin, and then realized it's only DIY if I actually ... do it myself. Plus, I was totally inspired by my partner, Peter Stopschinski: he had just finished an art book and accompanying concert called Catalogue of Spider Farts, and it just made me want to do my own giant drawing project. So I asked 53rd State if they would be into it. They’re all about thinking expansively about writing for performance, so they were into it – and just so patient and trusting. But, right when I decided to do it, we picked up touring for Method Gun and Stop Hitting Yourself, and then Match-Play got yanked out of the vault for an NYC presentation. And in 2016, we dug into our Field Guide Yale commission in earnest. So I really created this book in fits and spurts over the next few years.

Austin Chronicle: How do you even start with such a task?

Lana Lesley: The first thing I did was go to Mexico for a month and storyboard the whole book using shitty archival video from the 2002 Walker Art Center presentation of it at the Southern Theatre in Minneapolis. Then I started drawing – and failing. I have no training in drawing, I have no idea how to make a graphic novel – I still don't – so there were a lot of do-overs, a lot of mistakes, and a lot of mmmmmm-I-have-to-embrace-the-shittiness-or-I’ll-never-let-it-go.

Lana Lesley: And once I finally settled into the process – how I was going to draw, scan, design the book, et cetera, I had to just find times to get it done. I was lucky enough to get the gift of retreats and getaways at friends' houses, and to get a Tofte Lake Center residency twice. I'm a shitty art multitasker, so I had to block out seven- to ten-day chunks, and then put it away for long periods, and find my way back to it. And that's why it took over three years.

Austin Chronicle: And now 53rd State Press has taken good care in reproducing and packaging your work, and, wow, it’s a damned fine thing. But, okay, why – I mean, ah, if the archival video was that shitty – why did you use the Walker Center footage in particular?

Lana Lesley: I picked the Southern Theater performance because that space was the most perfect venue for the show – big, cavernous, gothic, beautiful, timeless, but with a palpable history to it. I love the proscenium arch. Also, that performance was us at our most hyped and terrified. That was our entrance onto the national scene. Luckily, Philip Bither was into our shabbiness and our greenness and our utter spaz – as a company and as performers – and I think the performances at the Walker have all that, and I hope the book reflects all of that.