The cult favorite comedy draws back the curtain

You think you understand enthusiasm, and then you hear the song. 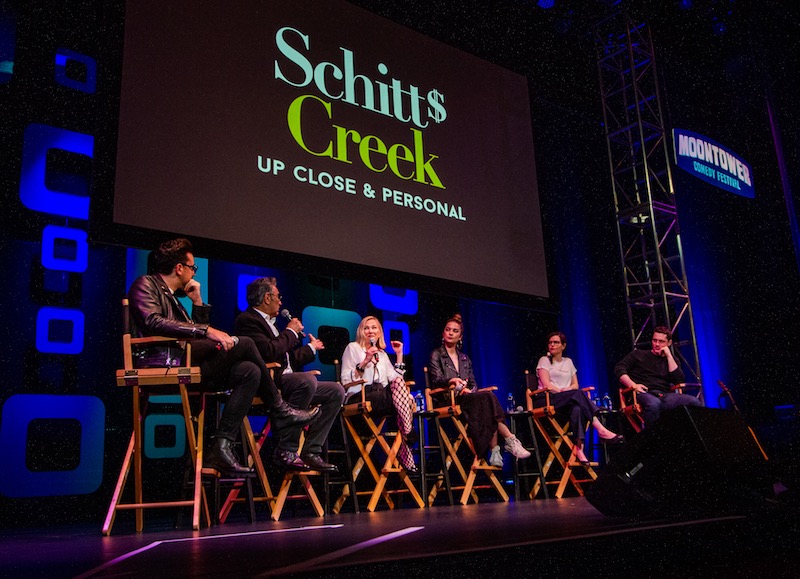 I mean, it’s not crazy that people would be jazzed to hear it – Tina Turner’s “The Best” is a certified crank-up-the-volume-and-sing-along banger – but it was Schitt’s Creek, the Canadian comedy series about the Roses, a formerly wealthy family forced to move to the titular small town, that transmogrified it into a battle hymn for gay love. (Sprinkled spoilers from here on out.)

Featured twice in Schitt’s Creek’s fourth season, “The Best” was an integral part of the romance between David Rose and Patrick, his business partner, and one more piece in the show’s overarching plotline – that of a family opening itself up to vulnerability and love.

All this to say, it was with good reason that the sold-out Paramount Theatre erupted in cheers, applause, and singing when “The Best” started pumping through the speakers before Saturday night’s late show. Including this talkback-style show in a comedy festival line-up had naturally increased the likelihood that some audience members would be people unfamiliar with the series who had stumbled into the theatre, but the sonic response to the pre-show music immediately confirmed that fans were a solid majority.

Which was good, because the program itself – showrunner Dan Levy (who also plays David) moderating a discussion with five other principal actors – felt like an enormous, beautifully wrapped present for everyone who has found themselves delighted and moved by Schitt’s Creek over the past four years. After a tightly edited video montage summarizing the major plot points of seasons 1-4 (Season 5 was graciously left off, presumably because it has yet to be added to Netflix, where so many people were introduced to the show), Dan and Eugene Levy (yes, the comic legend, and yes, also Dan’s father, and Johnny Rose on the show) came out and received what would be the first of the night’s three standing ovations. They shouted out audience members who had traveled to Austin specifically for this show (more than a dozen in the orchestra alone!) and admitted to drinking one too many frosés at Hotel San José that afternoon, before beckoning out the rest of the crew: Noah Reid (Patrick), Emily Hampshire (motel proprietor Stevie), Annie Murphy (Alexis Rose), and Catherine O’Hara (matriarch Moira Rose). Once everyone was perched in their folding director’s chairs, the younger Levy kicked off the Q&A by acknowledging his dad and O’Hara’s extensive, intersecting comedy careers, many previous experiences playing husband and wife and connection to Austin. (Christopher Guest's mockumentary Waiting For Guffman, in which they both starred, was shot in Lockhart.) Though it hadn’t been clear to me how audience members were supposed to submit questions pre-show, some folks had clearly figured it out, as Dan Levy shared that there had been multiple requests for a performance of “God Loves a Terrier” from Guest's Best in Show. Eugene Levy and O’Hara were charmingly game, singing not just a snippet but the whole song, to considerable applause. From there, the conversation bounced to audition experiences – both Murphy and Hampshire described auditioning for Schitt’s Creek at tumultuous times in their personal lives (the former’s “home had just burnt to the ground," the latter had just gotten divorced), while Reid (who joined the cast midway through the third season) laughed about his decision not to watch any of the show before auditioning.

Each cast member was asked about their tie to their character or their process. O’Hara, remarking on her favorite wig, slid into Moira’s distinctive voice: “I could no more choose between wigs than between my own bébés!” Murphy acknowledged the debt of gratitude she owes to the YouTube videos of the Kardashians, Olsen twins, and Lindsey Lohan she watched in preparation and shared the story of the invention of Alexis’ signature hand positioning; after seeing how many wealthy women rested their handbags on their forearm and left their wrist limp, palm up, she wondered, “What if there was no handbag, and I flipped the hand and tossed another hand in there?” 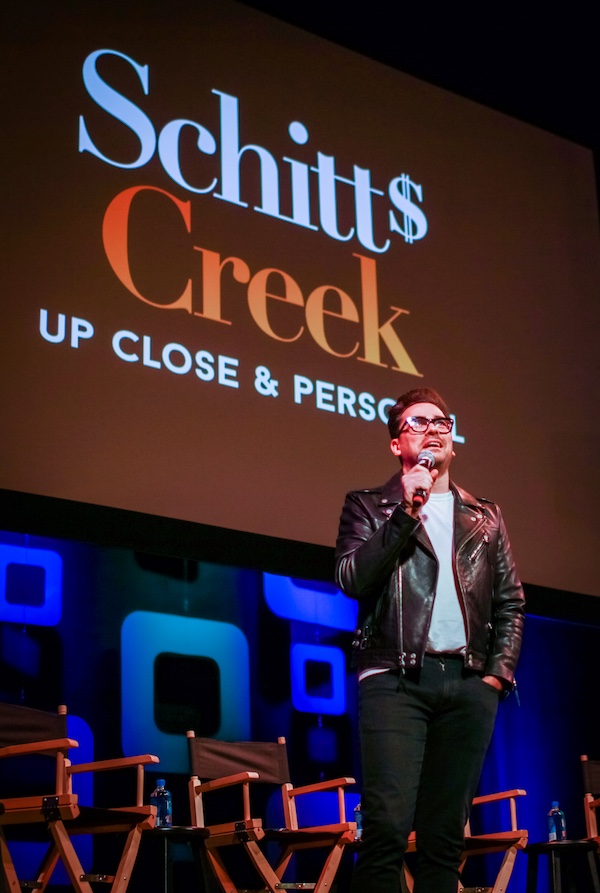 Anyone who has attended a post-performance talkback knows the success of the experience lies with the moderator, and Dan Levy was an ideal one throughout, providing enough structure that the Q&A covered a lot of ground and time flew by, warm and spontaneous enough to make it feel like a friendly conversation the audience was just lucky enough to sit in on, rather than an interrogation. The only loss was that it meant no one was asking Levy himself questions, and as both a main character and the show’s creator, that left a lot of very interesting ground untrod. One of Up Close & Personal’s funniest asides came from Dan in the discussion of the show’s unofficial catchphrase, “Ew, David!”: “Do you know how traumatizing it is to walk down the street and have people say, ‘Ew’ to you?” You couldn’t help wishing for more.

There was only one way for the night to end: Their Chekhov’s gun, an acoustic guitar sitting patiently stage left for the entire show, had to be played. After a round of Family Feud that pitted five audience members against the actors (which despite being clearly rigged in favor of the audience players, was almost lost by said participants, who, despite their clear enthusiasm, could not come up with correct answers for the Schitt’s Creek trivia questions being posed, bless their hearts), Reid took up his instrument for the gentler version of the song that had kicked off the night. Facing out, in a tight spotlight, Reid sang his acoustic adaptation of “The Best” with a clear voice and impossible tenderness. If you didn’t show up knowing why so many people evangelize for Schitt’s Creek, it was a pretty good way to get religion.