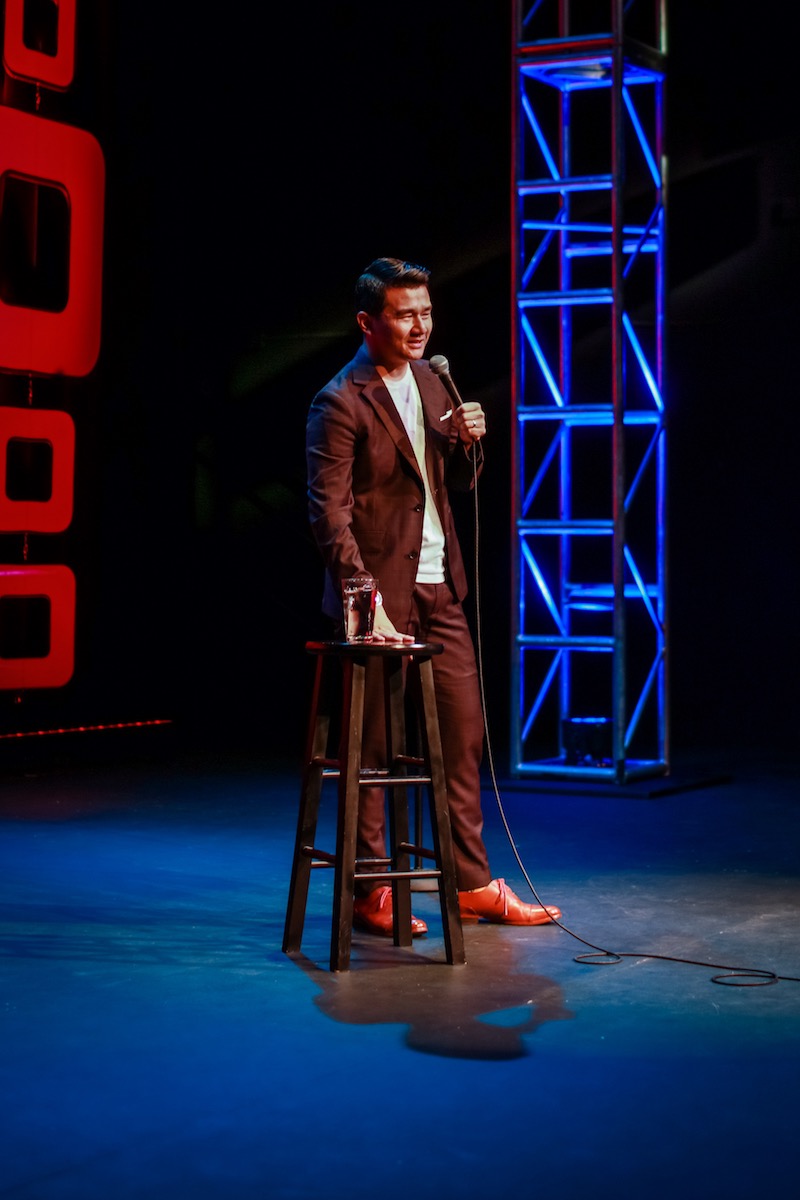 Ronny Chieng at the Stateside, Moontower 2019 (Photo by Bells and Whistles Productions)

Headshots are a tricky business. A comic is tasked with getting a still photo to communicate their charisma, their approach to comedy, why I might want to come to their show. Scroll down the Moontower Comedy website, and there’s one headshot that radically sets itself apart: Ronny Chieng’s.

There’s color, drama, a prop other than a microphone. Sure, you can write off its singular nature because it’s cropped from his Tone Issues Tour poster, so of course there would be more art direction, but the image’s precision and style is still notable. We’ve survived so long through the reign of the schlub. Isn’t it always exciting to get our hands on some panache?

Ronny Chieng is what his poster promises: a comedian invested in structure, confident in his control of the show, and sharp in every sense of the word. His Friday evening set at the Stateside, which ran a little long (to the utter delight of his large and very enthusiastic crowd), was in sharp contrast to the two that preceded him. Justin Hicks, an Austin-based stand-up, opened with a jovial and largely storytelling-based set (his bit about rating the safety of your neighborhood by the fanciness of your H-E-B earned huge hometown laughs). K. Trevor Wilson followed and brought an even more relaxed wryness to the stage, sharing the difficulties of taking care of rabbits (a great pet “if you want to own something that’s terrified of you”) and genuinely lovely (but still very funny!) stories about his girlfriend, a former powerlifter who “likes to wrassle” him.

There was a little rubber band snap, then, to go from Wilson’s generous beard and Batman trucker hat to Chieng, in a deftly-tailored suit. There wasn’t a getting-to-know-you portion – once Chieng came on, we were in it – not a runaway train, but a sleek one with a set destination.

The opening refrain was abundance, Chieng circling around American over-packaging and endless demand, taking Amazon Prime to new and absurd (but also maybe inevitable) heights (“Same-day delivery? Un-American … Let’s get Prime Before.”) He described the Sisyphean task of trying to decline a bag for a meal at McDonald’s to big laughs, while preserving a strain of honest frustration with our unwillingness to change environmentally dangerous behavior. Deftly, Chieng repeatedly pivoted perceived outsider statuses (as someone born outside the United States, as an Asian man) into positions as truth-tellers – who better to report on the foibles of America? Perhaps, as he suggests, Asian-Americans “are the only objective referees in the ongoing race war”.

Chieng moved from bit to bit with efficient flow, interrogating stereotypes about Asian parents (on prestige being the most important thing about having kids in the medical profession: “Helping people is the unfortunate byproduct of being a doctor.”) and sharing experiences from his time on the road as a Daily Show senior correspondent, including fucking with white supremacists. At the tail end of a week where celebrities of different stripes butted heads with culture critics online (Lizzo, Justin Bieber, Ariana Grande, and Olivia Munn up against Pitchfork, E! Nightly Pop, and the Fug Girls, respectively), there was a weird timeliness to a bit where Chieng compared comedy critics to a man going to a hospital and critiquing women as they give birth, but it didn’t seem to lose him any traction with an audience firmly in the palm of his hand.

Chieng saved the most personal and intricate material for last: the story of trying to make an international flight to Australia for his wedding (one of three – you’re gonna have to hear him tell it to get all the details). It had a few deeply satisfying callbacks to earlier bits, which gave you a little peek at how thoughtfully structured the show is. But maybe that shouldn’t have been surprising. That’s what the headshot advertised.