The host of Nailed It – well, you can guess

It’s easy to forget about Thursday nights. You can just see the weekend on the horizon, but it’s not yet close enough to taste. They hold promise, but Friday morning’s shadow looms large. Luckily, every single wisp of responsibility and somber-mindedness was banished once you crossed the threshold of the Palm Door on Sixth last Thursday night. 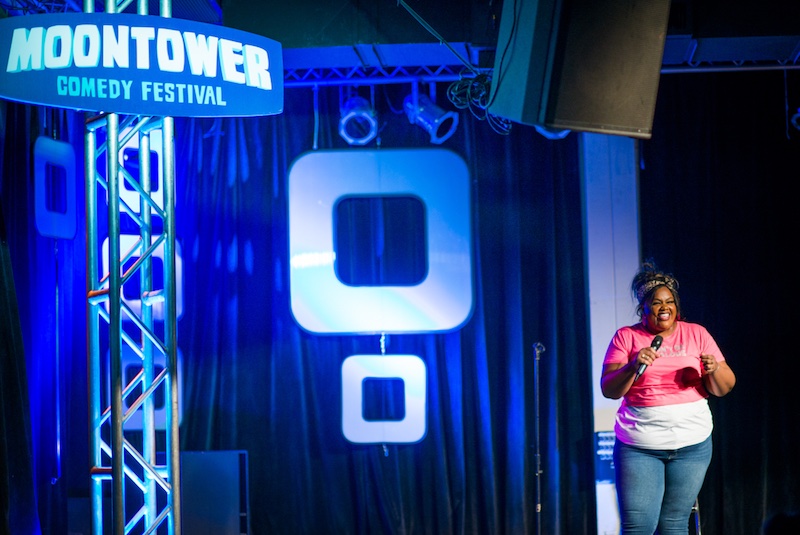 Braving the shockingly robust crowds of partiers on Dirty Sixth to get to the venue was sobering, but the buzzy crowd filling the rows of surprisingly comfortable folding chairs inside the Palm Door immediately lifted one’s spirits. Clearly, no one had ended up there on accident – it was an audience well-armed with goodwill and earnest anticipation.

A little surprisingly (and maybe because it was, after all, a late-night show on a Thursday), the show started pretty much on time, with local stand-up comedian Justin Hicks taking the stage. The least chaotic of the night’s three performers but just as warm and at ease with the crowd as the two that followed him, Hicks earned big laughs right out of the gate by poking fun at his Connecticut upbringing (Do we know what Connecticut’s state animal is? he asked us. “It’s the sperm whale. They chose that.”) and his dad’s newfound love of grits, which he alternately described as “hot poverty” and “hardship, two servings.”

On his heels was Joel Kim Booster, of stand-up and Shrill and The Other Two writing and co-producing fame. He picked up Hicks’ thread of food-related stories with a description of visiting a P.F. Chang’s full of white people while on tour and being greeted as “a boy prince,” then ricocheted to stories about drugs on and off cruise ships. (On Californian friends insisting that weed can help dispel a hangover: “Boy, is that like putting a hat on a hat.”) For all his live-wire energy and speed of delivery, Booster stayed firmly on the right side of frenetic, making even his crowd work, which involved him interrogating a couple in the audience about their relationship and firmly shutting down someone’s attempt to applaud when they said they’d been together nine years (“Don’t clap for them! I’m working!”), feel completely under his control.

And then on rolled our headliner, quite literally. To her own and the audience’s immense amusement, Nicole Byer came up through the center aisle and did a shoulder roll onto the stage, where she immediately regaled us with the story of a run-in with a one-toothed woman on the way to the venue. From there, we were off to the races with a series of bits around different films she’d revisited recently – her “favorite arthouse movie, Ghost,” sparked questions about what would happen if she died “in one of [her] dumb outfits.” Would she be stuck without a bra if that’s the way she went? A number of Disney films were given devastatingly funny summaries that laid bare all their faults (favorite descriptor: the seven dwarfs as Soundcloud rappers). It was a sharply written set that still felt off the cuff thanks to Byer’s breezy delivery and ribald content, and it would have been entirely satisfying if there hadn’t been any surprises. But about three-fourths of the way in, as Byer segued from talking about the baking show she hosts on Netflix, Nailed It (where three contestants “compete to serve me poison”), she had a throw-away line about liking to fuck white guys that earned a lone but very confident clap from the right side of the audience. Byer stopped to identify the clapper, Colin, and began quizzing him to determine whether he was serious about being into her. Would he relocate for her? Would his mother hate-crime her? Byer’s joyful disbelief at the situation was infectious, and the crowd cheered as she recited her email address so that Colin could contact her after the show and then did a lap around the stage, yelling, “I’m gonna fuck in Austin!”

As Kim Kardashian said: It’s what she deserves.