In a rapid-fire show, these Gotham comics earned their laughs 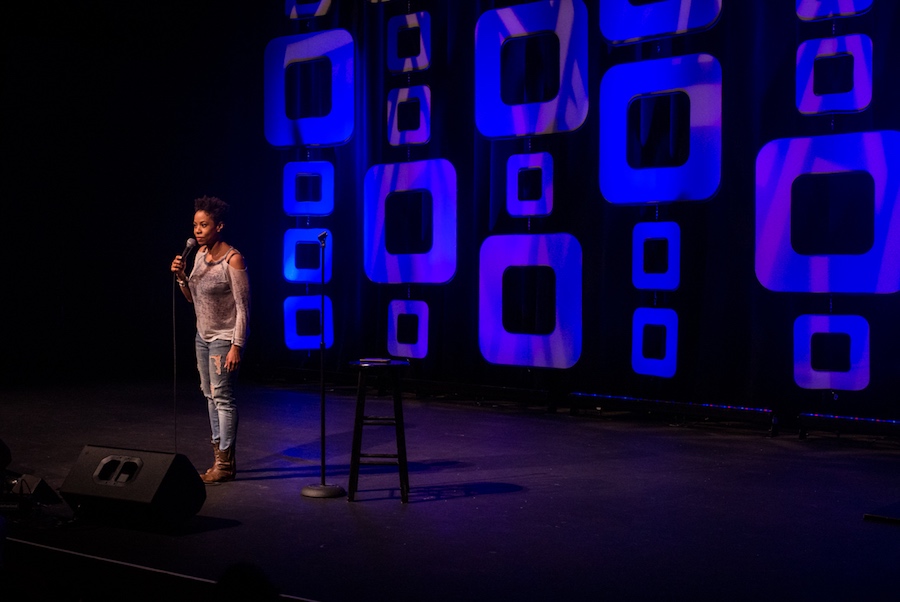 Marina Franklin at the Stateside, Moontower 2019 (Photo by Bells and Whistles Productions)

Soder opened his set with a few observations on how Austin has changed. “You’re a scooter town now,” he said. “You guys went from being weird to dorks.” He then hypothesized about how we got here, suggesting that perhaps a bunch of children took over City Council. (If only it were that innocent.) Along with Donnelly and Soder, the 90-minute showcase featured stand-up from fellow East Coasters Joe DeRosa, Carmen Lynch, Marina Franklin, Mike Vecchione, Rich Vos, Jessica Kirson, Nathan Macintosh, Big Jay Oakerson, and Andrew Schulz. Donnelly opened with crowd work, calling the front row “the tech department of the festival.” “A lot of Game of Thrones opinions in the front row,” he joked as he transitioned into a solid set. It loosened the crowd for what proved to be an edgy show that ranged from the straight, white, male perspective on the #MeToo movement to Oakerson’s “dark and dementated” ideas for fun ways to pass time in a hotel room. (Hint: They involve a black light.) Each set at least toed a line; most leaped over it.

What separated this showcase from many so-called, late-night, “blue moon” shows: All the comedians earned their laughs. Many were crass, but none were lazy. Even when veteran comedian Vos took the stage and sat down on the stool with a slightly brooding air, there was an undercurrent of good-natured cleverness to his self-deprecation. “I don’t put out the energy like the other comedians,” he said. “They still have hope.” But the observational undertones that flowed through his off-color jokes suggested a buried (albeit very deep) lightheartedness. And if Franklin is to be believed, a jaded attitude seems fair. “I used to be a nice person,” she said of her life before moving to New York. “I’m an asshole now.” She blames the subway. (Seems fair.)

Macintosh addressed the distracting echo of the all-brick, high-ceiling venue by ditching the mic mid-set and delivering his jokes on classism the old-fashioned way. “After sitting in first class,” he joked, “I immediately understand why rich people don’t care about poor people.” His voice reached the back of the long 800 Congress venue without losing any inflection, providing one more example of how polished each performer was. The styles varied drastically, too, which helped keep the quick-fire rotation of comedians from blending together. Schulz closed out with a long-form anecdote about his 71-year-old Scottish mother living in modern, multicultural New York. It killed, ending the evening on a high note. It all made for a surprising showcase that energized the audience.