Princess Mans Up For a Female Sci-Fi Future

Alexis Gideon + Michael O'Neill's 'Out There' is in here on Thursday 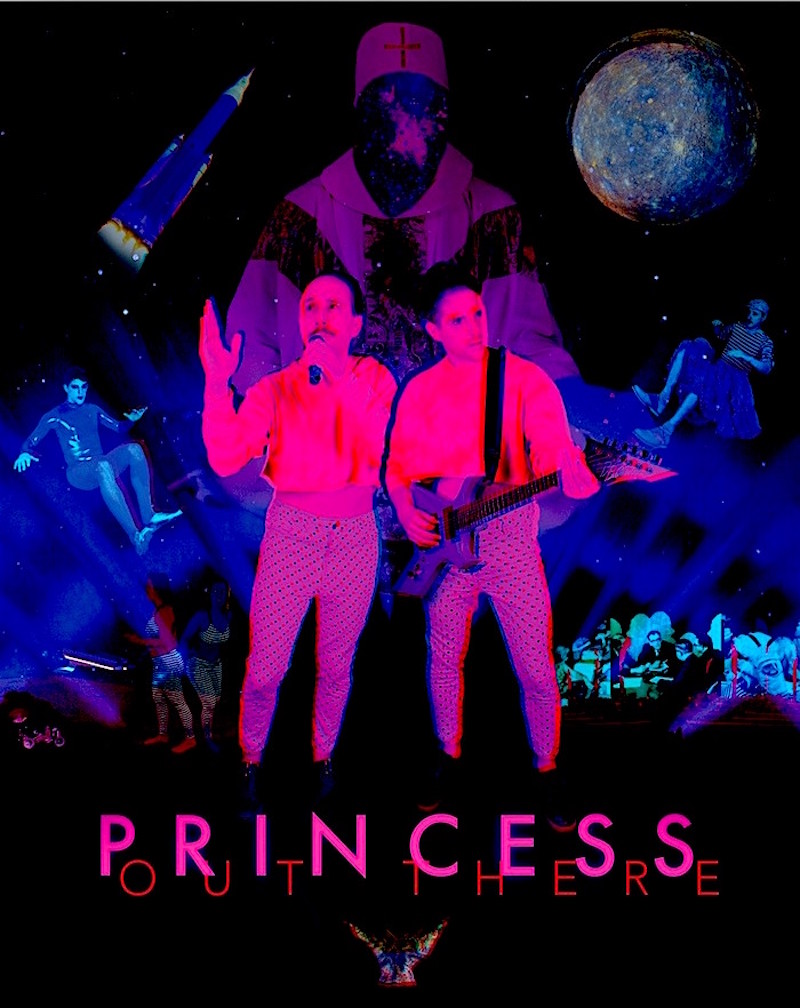 Everybody knows that these dudes will rock

Princess is a band. Princess is a force of nature. Princess – oh! – Princess is a living, breathing, two-man art activation on legs, and those legs might be sheathed in leather or lace or jeans or jamdani or – it could really be whatever.

Princess created, through collaborations with JD Samson and visual artist Jennifer Meridian and the band TEEN, a #MeToo-inspired sci-fi concept album that explores the role men ought to be playing during the current cultural reckoning of misogyny.

Princess will be in Austin on Thursday, April 18, to bring that album, Out There, to full sonic and video-enriched life at Hotel Vegas on East Sixth.

Do I need to tell you that Princess is headlining that night’s Hotel Vegas lineup, that they’ll be going on first – at 9pm – and, after they’ve blown all minds and shaken the odd booty into bouncing via psychedelic art-pop that’s the best kind of strange, that they’ll be followed by Hey Jellie and Caleb de Casper and that I, personally, could happily listen to Hey Jellie’s "Going Back" at least twice a day for the rest of my life, probably, even if I lived to be older than my great-grandfather, Finn Rongvald Wilhelmsson, who died at age 98?

No, I don’t need to tell you any of that.

But Alexis Gideon introduced himself with a mid-tour howdy recently; and I’d discovered that he, too, is an aficionado of that bygone raconteur Lord Dunsany; and so I needed him – Gideon, not Dunsany – to tell me a few things.

And this is how some of that went:

Brenner: Oh, dude, your touring schedule, which I just looked at –

Brenner: How do you deal with such a relentless traveling and performing agenda?

Gideon: One of the things that’s made it a bit easier on this tour is that a lot of the places we’re performing at are museums. So a lot of the shows are on the early side, so we’ll have some performances that are at six or seven and I can be in bed by nine-thirty or ten. So it’s not like every one’s at a rock club and going until three in the morning – and that makes it a bit more manageable.

Brenner: And what’s the difference, what have you noticed, between audiences at regular music venues as opposed to audiences at art-gallery venues?

Gideon: Yeah, it’s interesting, it’s something I’ve been thinking about quite a bit. One of the biggest differences, I feel, is that people who go to museums in general are more inclined to go and visit a museum even if they aren’t going for a specific exhibit. People who are like, “Oh, whattaya wanna do today?” “Well, let’s go to the museum.” Whereas I don’t think that happens quite as much, or in the same way, with music. Usually people go to see a band they know, or a band they’ve heard of. So performing in museums has more of a built-in crowd that’s more, ah, inquisitive – that’s not necessarily knowing what they’re going to see, but they’re excited to go see something that’s at the museum. And I think it makes for an audience that is, sometimes, more open to seeing something unexpected.

Brenner: It’s been my pleasure recently, in preparing for this interview, to binge Alexis-Gideon-the-oeuvre, as it were –

Brenner: – so I’ve been wondering now: Out of all the lyrical traditions and styles in the world, what moves you to work mostly in not just rap, but in the kind of breakneck, rhythm-paced, multi-rhyme-cascading rap that lesser artists would sprain their fucking tongues on?

Gideon: Ha! You know, I grew up in Manhattan, and there was always rap everywhere, hip-hop everywhere. In stores, restaurants, and – anywhere you went. So, growing up with that sound it, was something I was very interested in. Also, I studied jazz and was very much interested in technique and musicianship, so I think the pairing of those two things made for the type of hip-hop I got interested in. Like when I was in high school, I got really into Antipop Consortium – they were a big influence on me. And I’m attracted by virtuosity and find it fun to listen to. So that’s the music that excited me, and I think some of that has influenced the type of hip-hop lyrics that I do.

Brenner: Ah, okay, and – this is sort of an extension of the previous question’s structure – why is just the music not enough for Alexis Gideon? And why is music and enhanced video and live performance and immersive environment not enough for you? Why must there also be drawn animation, and stop-motion animation, and all manner of psychedelic effects in the videos that accompany your music-fueled live shows? What the hell?

Gideon: It was something that happened with me, with my solo practice, around 2008. I was touring a lot, doing a lot of performances, and I wanted a narrative element. I felt that there needed to be a story. So that’s when I started making these video pieces and, you know, trying to arrive at something. Being a completely self-taught visual artist, a lot of the styles and effects came out of not knowing how to do it the right way. Just, I’m trying to tell this story and I’m gonna push every button and turn every knob until I can get something that I like the way it looks.

Gideon: With this Princess project, Michael and I set out to write a more, uh, traditional album. We started working together again after a 12-year hiatus – we’d remained friends the whole time – but we decided to make music together again. And so we were about three-quarters done with the album and we realized, no, look – there’s a story here. And we’d started working on the album right around the time of the Women’s March and the #MeToo movement – both Michael and I were in Washington for that 2017 Women’s March – and when we really listened to what we were making, seeing what it was about, we could tell that that backdrop had fueled it subconsciously. So we used the last quarter of writing-the-music to try to make the narrative, to hone in and get it wrapped up nicely. And once that was done, we started working on the video – and we realized it needed to be more of a video piece.

Brenner: [nods in affirmation – regardless that Gideon, talking into his phone in a distant hotel room somewhere, wouldn’t perceive the gesture]

Gideon: And, back to your initial question: I think that, ah, the video-with-the-music is one thing, and that can stand on its own, and the music can stand on its own. But when you’re in the room and we’re doing it live, it’s drawing on classic storytelling – like the story-song format – and when the audience is there with us, it really changes the performance and it becomes a shared experience in a way that watching a video on its own, or listening to an album on its own, doesn’t. It creates a more open environment for people to connect to the work.

Brenner: Oh, right on. And, let’s see – I understand that you’re a Dunsany fan.

Gideon: I am a Dunsany fan.

Brenner: How did that happen? Because that’s not, ah, a person’s typical … fandom.

Gideon: No, that’s true. So, there’s a novel by Flann O’Brien: The Third Policeman. I love that novel. And I wanted to make a video piece based on that novel. So I started doing some research and got in touch with the publishing house that works with the estate of Flann O’Brien, and – whatever – I found out that the rights to the novel were already given to a different director. Who I contacted and, ah, what ended up happening, I realized that it would not be be possible for me to make a piece based on The Third Policeman. So I thought of, instead of looking at it as a dead end, to look at it as part of the research process. So, okay, I need to take a turn here. So I started investigating what was influencing Flann O’Brien. And that’s where I landed on Lord Dunsany. And that’s when I started reading his work and realized that that would be a much better fit for the thing I wanted to do – which ended up being Video Musics’ Three Floating Oceans. So that’s what led me to Dunsany. And I really fell in love with his work.

Brenner: Yeah, I read The King of Elfland’s Daughter because I’d heard so much about it as a kind of genre-foundational story? And when I finished it, I was like, “Whoa, Dunsany, what else has this dude done?” And then the short stories, they’re – ah – it’s so weird to me, especially because he’s back in those days, and he’s writing about all this fantastic and otherworldy stuff and yet he’s writing about it like it’s happening in his kitchen or something. Which is really compelling – like it’s all just so domestic and ordinary.

Gideon: Oh, totally. And I feel like that point is something that has been really big for me, too, in a lot of my work. Kind of like the mystical and the mundane, the way that light refracts off a glass, creating a beautiful shimmering shadow on a table or something. It’s the most transcendent thing and it’s literally a glass on a table. It’s always on the edge of our fingertips, this kind of other, more beautiful universe, if we stop to look at it.