Flowers Cover Everything at the Stephen L. Clark Gallery

Letscher fingers do the walking among these gardens of delight

1. This review is a collage, let’s say, although of course we’re considering it textually rather than texturally, building it up from words instead of images. 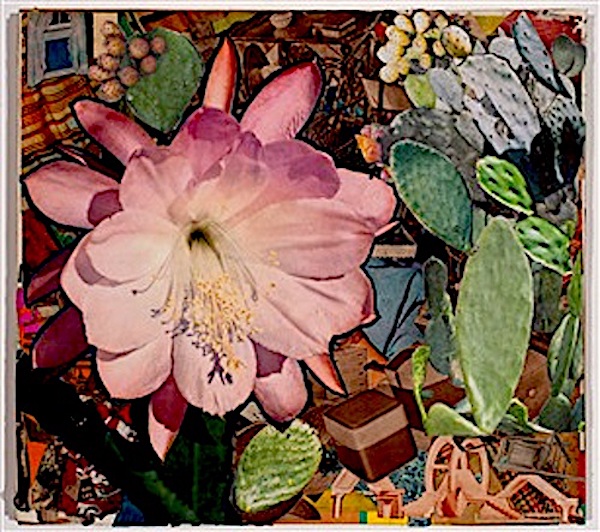 2. Lance Letscher runs his X-Acto blade along the outlines of a lithograph. He slices deeply into the paper, excising a drawing of leafy twigs, cutting as carefully as a surgeon performing an autopsy on the body of a fairy. There are more lithographs beside this one – the same beautiful, realistic rendering of arranged tree parts, all of them awaiting the artist’s knife.

3. The description above is from “Anatomy of a Print,” a Chronicle article about Letscher teaming up with the renowned Slugfest printshop for a series of limited-edition works. This was in 2002, the same year in which a new breed of rose was named after Albrecht Durer, before Letscher’s ascendence to international prominence, well before the Sandra Adair documentary The Secret Life of Lance Letscher premiered at SXSW.

4. “A flower,” Wikipedia informs us, “sometimes known as a bloom or blossom, is the reproductive structure found in flowering plants. The biological function of a flower is to effect reproduction.”

5. The Stephen L. Clark Gallery was established in 1994 and is located in a unique 19th-century building in Austin, at West Sixth and Baylor streets. The gallery specializes in fine art photographs with an emphasis on contemporary work.

6. “Flowers” is the newest exhibition from Lance Letscher, botanifying walls at the Stephen L. Clark Gallery through April 13. The artist’s recent collages feature images of those reproductive structures found in flowering plants, the photographic excisions of petal, pistil, and stamen often enhanced with bold outlines, lending a few of the polychrome creations a sort of Gilbert and George stained-glass effect – almost gilding (as the saying goes) these lilies, bringing them more starkly into each piece’s foreground.

7. Lilies? Well, yes, along with tulips, daisies, cactus flowers, morning glories, and a myriad more, now bound together in two vivid dimensions by whatever glue is made of half adhesive molecules and half collagist’s inspiration, multitudes of multifloral flourishes sharing the frame, sometimes, with contrasting gambits of text or water or human or pure pattern. You can imagine the cutting, the pasting, the hours of work that go into such papery horticulture.

8. “Letscher’s hyperkinetic installations have always required of him an exacting, sometimes obsessive focus,” wrote the Chronicle’s Sean L. Malin in 2017.

9. “This is necessary for what I want to create,” says Lance Letscher.