Out of the Voidoids Comes a Strong Silent Type

In which Ernie Stomach AKA Richard Hell gets downright abecedarian

Cuneiform Press, never a group to shy away from the odd or obscure, especially in the service of disseminating the good news about letterforms and divinely or demonically inspired texts, brings the world the return – the expertly produced, limited-edition, what-a-lovely-bibliocentric-object return – of Richard Hell’s first book. 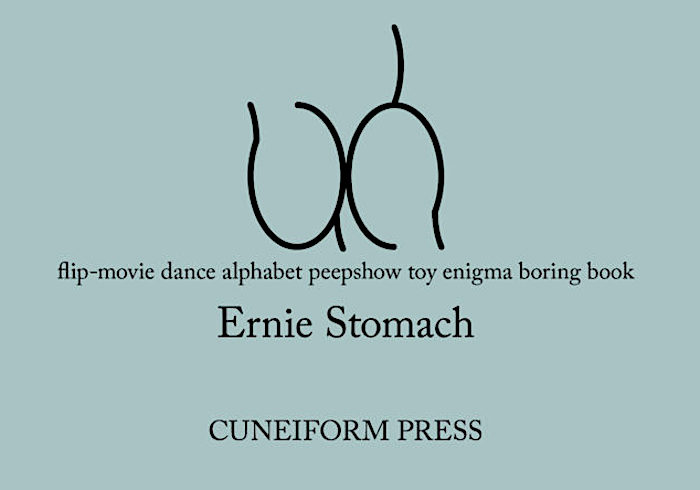 Richard Hell – of that band Television from the Seventies, of course. And, later – after he and Tom Verlaine had a parting of ways – of that other band, the Voidoids.

You know: “Blank Generation” and an array of lesser known releases?

So, that Richard, who was originally christened Richard Meyers but took his surname to Hell because that was how he felt at the time, also wrote poetry under the pseudonym Ernie Stomach.

He wrote under other pseudonyms, too, but right now we’re mostly concerned with Hell’s Stomach.

And, viddy the Cuneiform Press description here: “Stomach’s aim was a version of the Roman alphabet in which the glyphs correspond in their differentiations to lower-case block-lettered forms, but stripped to the naked elliptical minimum so that they would be not only sexy, but hard to distinguish from each other (facilitating misreadings and forcing the reader to pay attention). The letterform contents of that book were created crudely by the author using X-Acto knifed mylar templates and a felt-tip pen.”

And: “Now, with the advent of font software, Stomach has been able to recreate the book as he would have done it at the time were such technology available. This book’s design differs from the original edition only in the improved technology and materials used.”

We reckon it might be just the sort of thing you’ll want among the typographic treasures of whatever small library you’ve amassed.