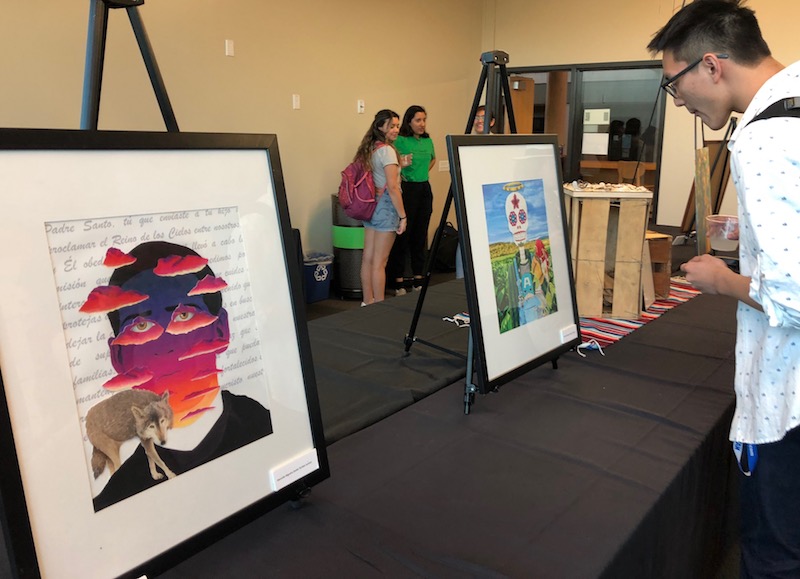 The exhibit included work by Jerry Silguero and Edith Valle – alumni of both the university and its CAMP - as well as Mexic-Arte Museum’s Mix ‘n Mash: Migration collection and the Munday Library’s archived photos of Cesar Chavez’s historic 1966 march from the Rio Grande Valley to the Texas State Capitol. Perla Delgado, director of CAMP - an educational and holistic support scholarship program that helps students from farmworking backgrounds in higher education - said that they wanted to do an art exhibit for the first time because “it’s a different way to communicate the injustices that our communities face while also communicating the contributions that they make.”

“We do so much more for our communities,” Delgado said, “not just here in Texas but across the U.S. So this exhibit was to convey the beauty behind our culture and the work they do.”

The work of featured artists Valle and Silguero stems from their family backgrounds, rooted in farmworking, migration, and identity. With a family who began farm working in Mexico and continued after coming to the U.S., Valle focuses on the beauty that she sees in her family both “nurturing the earth and nurturing the community” with their farming as opposed to the difficult and laborious way it is often discussed. She also explores her family’s “relationship with the sun in their skin, so worn from the sun, so dark, and how it radiates off of them.”

Silguero takes a more political standpoint with his work, considering himself a “bridge between the whole idea of Mexican-American.” He uses art as a way to cope with and resist the difficult, overly politicized issues faced by his migrant community. His main goal through art is to start conversations about immigration. As a CAMP alumnus, he remembers when he skipped school once while growing up in Indiana because he wanted to help his family pick apples: “I got my ass whooped.” Silguero stresses that the value his mother placed on his education opened the door for him to attend St. Edward’s – with the help of CAMP – graduate, and pursue art activism for the immigrant community. “A day without an immigrant out there picking your foods or your berries or veggies or anything,” Silguero said, “you wouldn't eat. Don’t bite the hand that feeds you.”

Other CAMP events this week include a screening of the film Food Chains (Wed., March 27, 6:30pm, in Carter Auditorium on the St. Edward's campus), signmaking in preparation for the annual ¡Si Se Puede! Cesar Chavez March (Thu. & Fri., 10am-4pm, in Moody 118), and the march itself on Sat., March 30, assembling at the Terrazas Public Library at 9am and marching to the A.B. Cantu/Pan American Center at 10am.