On at least one thing 500 humans and a million Mexican free-tailed bats agree: When it's Batman's 80th birthday, you gotta come out. 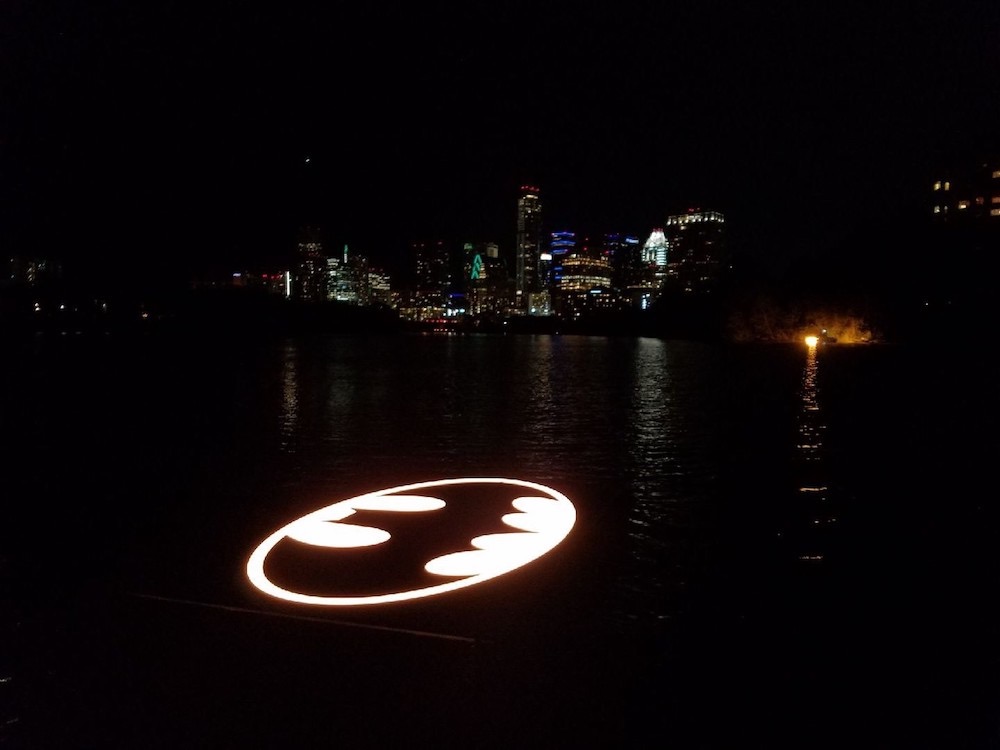 Batman’s iconic emblem lights up Austin’s Lady Bird Lake where more than 500 fans gathered to kick off the yearlong celebration of the Caped Crusader’s 80th anniversary, as they watched the nightly bat flight at Congress Avenue Bridge. (Photos courtesy of Warner Bros. and DC Comics)

DC had decided that the Live Flying Mammal Capital of the World was just the place to kick-start its global commemoration of the Dark Knight's eighth decade and was banking that the populace of the planet's largest urban bat colony would wing out from under the Congress Avenue Bridge for its nightly feed in a spectacular show befitting SXSW, where gazillion-dollar activations are now de rigeur. The question was: Would nature cooperate? 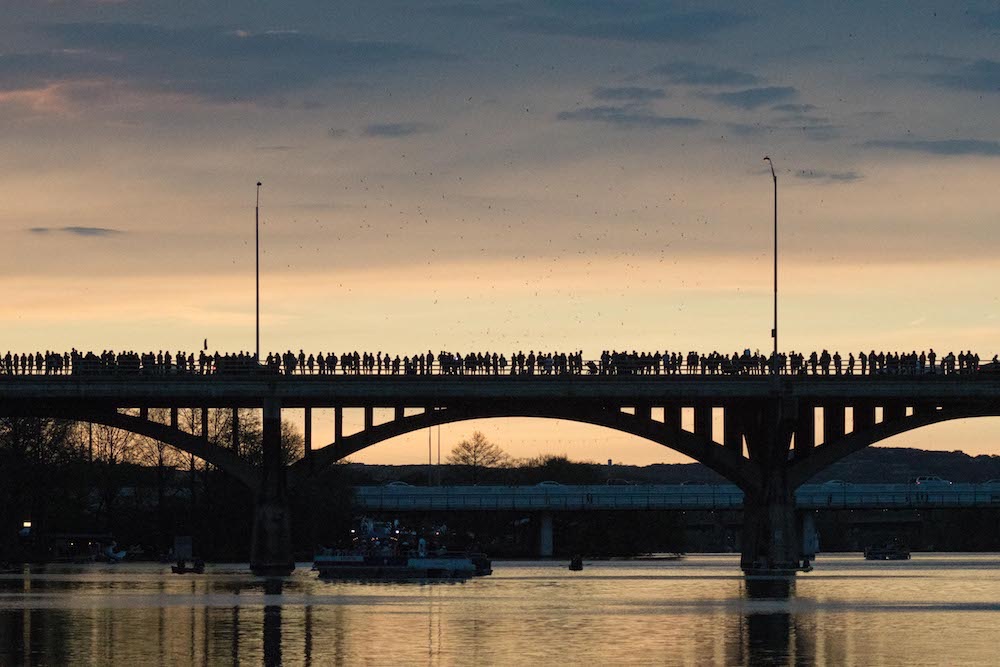 More than 500 superfans gathered on Austin’s Congress Avenue Bridge to kick off the yearlong celebration of Batman’s 80th anniversary and watch more than 1 million bats emerge to take flight in the night.

Well, the bats must have gotten the signal, because they flew out in force for the roughly 500 people on the topside of the bridge, some of whom marked the occasion by waving signs with DC's #LongLiveTheBat anniversary catchphrase and artwork on it. If you haven't seen it, the art features the face of a characteristically brooding Masked Manhunter (brows furrowed at the prospect of turning 80 perhaps?) beautifully rendered by classic DC artist Jose Garcia-Lopez, on which are superimposed comics-style panels each of which features a version of Batman from the character's long history: Adam West from the Sixties Batman TV series, the silhouetted Old Man Bats from the cover of Frank Miller's The Dark Knight Returns, Caped Crusaders from film and animated series, and even LEGO Batman from The LEGO Movies. 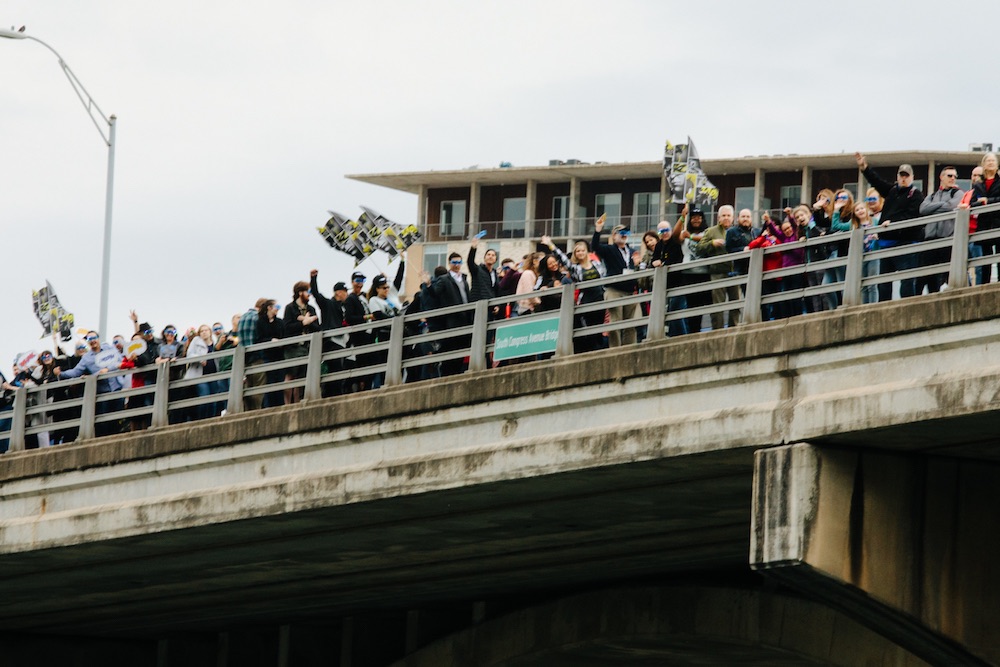 Batman fans turned out in full effect to celebrate the 80th Anniversary of the world’s No. 1 superhero.

Then, after Austin's bats got the signal, Austin got the Bat-Signal! Yes, the mythic spotlight that calls the Gotham Gangbuster into action shone in our town, and because it's Austin, where we have to keep it you-know-what, it shone not in the sky but on the waters of Lady Bird Lake. (Which actually makes a certain kind of sense considering that Austin gave the world the Bat-Boat back in the Adam West days – thanks to local boat manufacturer Glastron.) 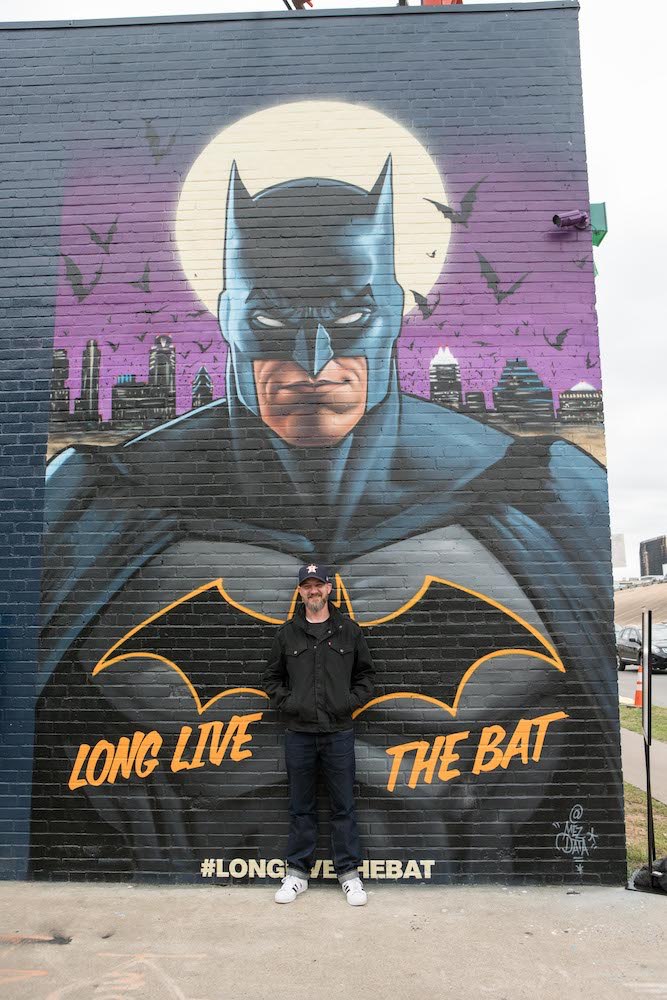 Local artist Mez Data poses with his original mural, which was unveiled Friday, March 15 at Austin’s Native Hostel. It features the Dark Knight with Austin’s night skyline in the background. The mural will remain up through April 15 for fans to take pictures.

Prior to all that fun on the water, though, DC unveiled the commemorative mural it commissioned from Chronicle "Best of Austin" winner Mez Data. And no offense to Mr. Garcia-Lopez, but the Austin-painted Bat looks like he's a little more in the mood for a party. The slightly sneaky smile om him suggests that maybe he's waiting for the Black Pumas to hit a groove so he and Catwoman can hit the dance floor for a little Batusi. Well, why we're waiting for the music to start, hey, DC, how about getting Mez Data to work on one of your Batman comics. He's more than passed the audition.