DC Swoops Into SXSW to Kick Off Batman's 80th Anniversary

If you're looking to launch the global celebration of a certain Dark Knight's 80th bat-day, where better than a spot where a million bats make a choreographed flight into the night every sunset? So thought Batman publisher DC, which is kicking off its worldwide #LongLiveTheBat party at the Ann W. Richards Congress Avenue Bridge on Fri., March 15.

We're just two weeks shy of the actual 80th anniversary of the Caped Crusader's first appearance in Detective Comics #27 – that would be March 30th, as any self-respecting Batfan could tell you – and with the world's eyes on Austin this month thanks to SXSW, this seemed just too good a time and place for firing up the Bat-Signal. 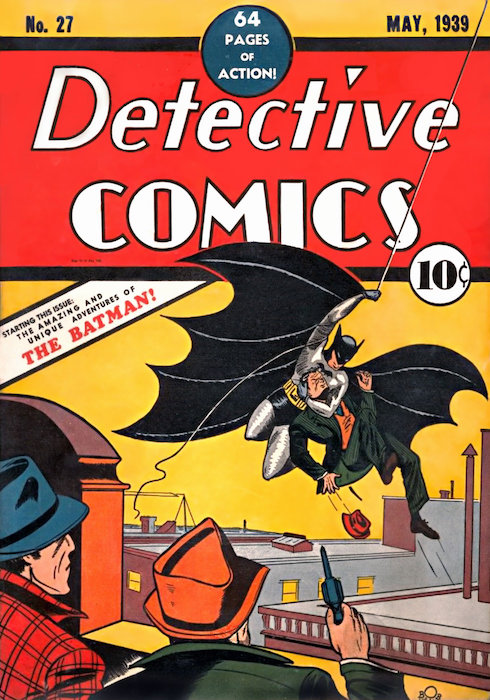 Whether visitors to the bridge will actually get to see a Bat-Signal over the Live Music Capital along with the estimated 1.5 million Mexican free-tailed bats making their nightly mass exit from the bridge's underside isn't certain; DC is only promising "a very special surprise" during the 7:30pm activation at the site. But it wouldn't be without precedent: One illuminated Los Angeles City Hall two years ago in tribute to the passing of Adam West, forever identified with the Gotham Gangbuster after portraying (and alter ego Bruce Wayne) in the Sixties TV series that affixed the word "Bat" to every item in the Cowled Crimefighter's cavernous lair and personal arsenal (including his infamous Shark Repellant Spray). And to have one shine in the City of the Violet Crown as it did in the City of Angels would also serve as a fitting remembrance of Mr. West, since Batman: The Movie – the feature film made from the TV series – had its premiere here in 1966, with West in attendance (and in costume). 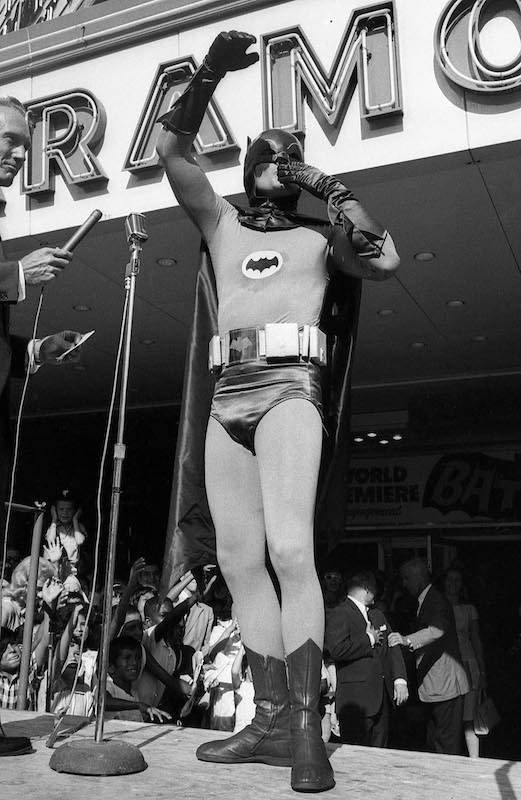 Reportedly, some 30,000 Austinites turned out for a parade on Congress featuring West and a trio of his villainous co-stars onscreen: Burgess Meredith (the Penguin), Cesar Romero (the Joker), and Lee Meriwether(Catwoman). Some of that staggering turnout may have been due to the Batmania that swept the nation during the campy series' first season, but more had to do with the fact that film premieres in Austin – a dime a dozen today – were all but unheard of in the mid-Sixties, and this came about only because local boat manufacturer Glastron, which built the film's Batboat, wrangled a promise from the producers that the movie would have its premiere here. But I digress.

Back at the 80th anniversary launch here, DC has also commissioned a mural for the side of Native Hostel, 807 E. Fourth, from Best of Austin winner Mez Data. I've yet to see any Masked Manhunters among his array of colorful portraits (McConnaughey, Stevie Ray, Willie, Ron Burgundy, Rodney Dangerfield, et al.), though I did catch a badass Harley Quinn in his Instagram portfolio, so he's clearly spent a little time in Gotham. The mural will be unveiled at 5:30pm, two hours before the action at the bridge. As for what will happen later in the #LongLiveTheBat celebration, DC is publishing a hardback collection of comics stories pulled from the Dark Knight's eight decades: Detective Comics: 80 Years of Batman (DC Comics, 418 pp., $29.99). The 1,000th issue of Detective Comics will hit comics shops on March 27; the 96-page special issue will feature stories by creators such as Warren Ellis, Denny O'Neil, Neal Adams, and Paul Dini ($9.99). Hot Topic is releasing an exclusive T-shirt collection featuring the Caped Crusader. Romics, the comic book, animation and gaming convention in Rome, Italy, will host an immersive Batman 80th anniversary exhibit in April. In May, the USO will begin distributing a Batman-themed USO2GO kit featuring comics, movies, TV shows, games, and more. And Austin will add to the celebration again in May, collectible art boutique MONDO will host a curated anniversary exhibit at its gallery here, celebrating iconic Batman cover art throughout the years. But that's just a sampling; the anniversary year will also include partnerships with the Boys & Girls Clubs of America, exhibits at Madame Tussauds, a re-release of Christopher Nolan's Dark Knight Trilogy in IMAX, special events at Six Flags and Warner Bros. theme parks, Batman marathons on the Cartoon Network, a Batman-branded channel through AT&T, and more special Bat-products than were cranked out when ABC debuted that show with the "na-na-na-na-na-na-na-na" theme song 53 years ago. And don't forget Batman Day in September!

So gear up for 12 months of Bat-tastic activities. And it all starts here!