Ice Pick’s Pies Are Warming Up This Cold Town

Artisanal baker delivers Austin the savory and the sweet

Let’s begin with the truth that, if these pies weren’t so remarkably good, we wouldn’t be writing this post at all. 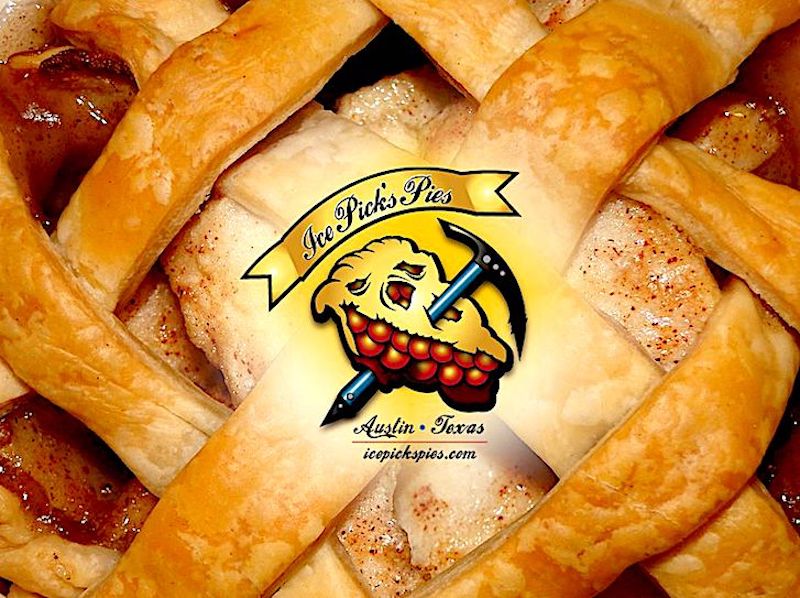 Ice Pick’s Pies – the three different varieties that were delivered to the offices of The Austin Chronicle – weren’t just good. They were more of a “What is this culinary brilliance causing a sort of tastebud orgasm in the moist cavern of my mouth?” sort of deal. And that was true of each type of pie – the savory Cajun chicken and andouille sausage pie, the equally savory spinach-cheese quiche, and the three-apple sweet pie – that we journos fell on, en masse, like a human storm of pie-eating fiends.

So that’s why you need to know about these pies. But there’s some interesting backstory, too. The name of the pie company, for one thing.

“About five years ago,” says Gabrielle Faust, founder and owner and baker of Ice Pick’s Pies, “I was sitting around with a bunch of friends late at night, playing poker, and we were all pretty intoxicated. And a friend of mine came home, and he was already more intoxicated than the rest of us. And he sat himself down, like, ‘I’m gonna play poker with y’all!’ And I was like, ‘I don’t know if that’s a good idea, because we’re gonna take all your money.’ And I beat him hand after hand after hand. And he goes, ‘Daaaaamn, you cold. You cold like an ice pick!’ And he always called me Ice Pick from then on, and it got to be like a nickname among certain groups of my friends. So when I was developing this pie thing, I was looking for something that was memorable, and Ice Pick’s Pies, I don’t know, it just rolled off the tongue.”

Okay, sure. That’s totally memorable. And it’s a good promotional move in an overcrowded market. But – hold on just a little minute. What about this woman’s own name? Gabrielle Faust? That sounds like the name of, what, some goddamn vampire novelist or something, doesn’t it?

Turns out that it is the name of a vampire novelist. Turns out that the relentless artisan of Ice Pick’s Pies, the longtime Austin resident who can turn dough and other ingredients into bits of gustatory heaven, has also written a small library’s worth of books – one series of which is vampire novels.

But, c’mon. “Gabrielle Faust,” is it? Give us a break. And who’s her sister? Misery Chastain? Seriously, Gabrielle Faust? Sure, honey.

“No, that’s my real name,” says Gabrielle “Ice Pick” Faust, sitting there, smiling, her wispy hair dyed a faint robin’s egg blue. Sitting there with a delivery bag full of just-baked, steaming pies. “That’s one of the few things my parents got right. My mom was reading a book about an Italian terrorist, a member of the Red Brigade, when she was pregnant with me – and that’s where Gabrielle came from. And Faust, well, that’s actually my family name. I know – most people think that I made it up.”

And, okay, how does someone go from writing vampire novels to baking pies?

“It goes back to learning how to cook when I was a kid,” says Faust. “I spent a lot of time in the kitchen with both my parents, and pies were just something we all connected over. My dad is obsessed with pies – he always wants one for his birthday, he doesn’t like cakes. And a lot of the recipes I use are ones that my mom passed down to me or my grandparents passed down to me, and I’ve adapted them.”

But now it’s a business?

“Well, I’m still writing,” says Faust. “I’m working on a new book right now, in fact. But outside of that, I reached this point in my life where I didn’t want another desk job, I didn’t want to be in graphic design, didn’t want to be in advertising. And that work had been my core paycheck for a long time. But you get to a point in your life where you’re like, ‘Okay, what really makes me happy?’ Like, the desk jobs aren’t making you happy. And writing is one of those fickle beasts, depending on what the tide is [and] who’s reading what. And the answer is, ‘Cooking makes me happy.’”

But of course it’s never that simple, is it?

“I enjoy cooking so intensely,” says Faust, “I love working in the culinary world. But it’s one of those things where if you’ve ever read any of Anthony Bourdain’s old stuff where he’s like, ‘Once you’re past the age of 27, you really shouldn’t go to culinary school, because they’re gonna eat you alive.’ You know? And I didn’t need to go to culinary school to make pies, because I’ve been doing it since I was five years old. So I started doing some test runs, making pies and giving them to people and asking what they thought. And they were like, ‘This is the best thing I’ve ever eaten in my entire life.’ And I was like, ‘Okay, I think I can do this.’”

[This is a reminder that this article exists because we more or less concur with Faust’s friends. Each of those Ice Pick’s Pies we had, they may not have been the best thing we’ve ever eaten in our entire lives … but they were damned sure some of the best pies we’ve ever had anywhere. Office curmudgeon Richard Whittaker opined that the sausage was really unnecessary in the Cajun chicken and andouille sausage pie … but we were like, “Richard, WTF, the sausage is part of the point of that pie,” and mostly ignoring him, anyway, because he was already going back for seconds. And account executive Jerald Corder was heard to remark, happily chewing, that he liked how there was so much tasty spinach to the spinach-cheese quiche, and that the nutmeg was a great touch. And the three-apple pie went so fast that we didn’t have time to notice what was said before the thing disappeared.]

And, ah, which pies sell better? The sweet (we’re guessing), or the savory?

“More of the savory pies are selling, actually,” says Faust. “Because people take them home for dinner, I guess. Because people are busy, and the pies can feed six to eight people. And I try to keep it affordable, because everyone I know is struggling a little bit. So for somebody to get a pie that’s gonna feed a family for twenty or thirty dollars, that’s pretty reasonable – and I’m still making a little profit. Part of me is tired of the culinary world that overprices everything, you know? Good food doesn’t have to come at a premium price. Sure, it’s locally sourced and a lot of time and effort goes into cooking it, but don’t you want people, regular people, to eat it? To be able to afford it?”

And where can regular people (or fancy people who are reading this article while they wait their turn for a color consultation in the goop pop-up market, maybe?) get their hands on one or more of these pies? Online, of course. Modern times. You place the order, and Ice Pick delivers. Or, here’s a cool thing, you can pick the pies up at St. Roch’s – a downtown bar that seems to be an outpost of Saints-loving New Orleans all year ’round.

“I’m friends with the guys who own St. Roch’s and the L.A. foodtruck outside it,” says Faust. “So if somebody doesn’t want their order delivered to them, they can just tell me what time they need it and they can pick it up at St. Roch’s – and the bartender will have the pie ready with their name on it. Those guys are absolutely amazing, and I think it’s another sign of people working together in this town.”

Ice Pick – aka Gabrielle Faust, author of vampire novels, designer of books and posters and websites, baker of deeeeee-licious pies – smiles, thinking of her friends.

“That’s what keeps me here in Austin,” she says. “People like that – just good people. Because we’re all in this together, we’re all trying to make a living. And good people are what really counts, you know?”