Hail, citizens of Austin! As the great-grandson of Finn Rongvald Wilhelmsson, it is my duty – if not my very weird, my destiny – to herald the arrival of Melanie Teichroeb’s Shield Maiden in this land. 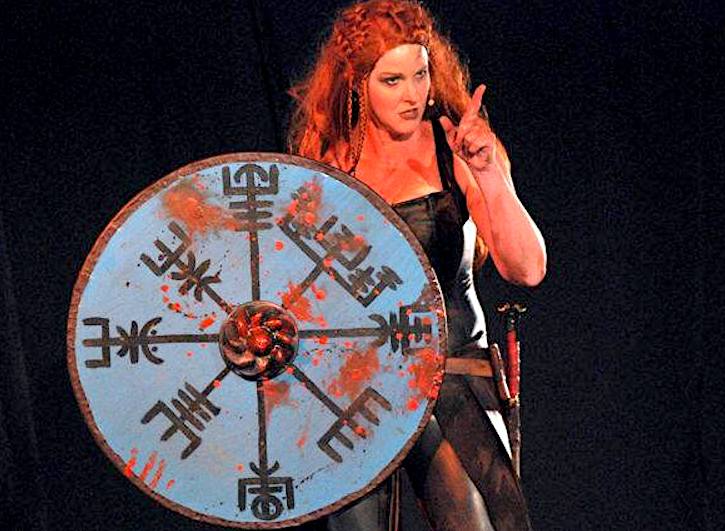 Here's that Ingrid Larsdottir, telling you what's what – the Viking warrior way!

Mind you, I’m no indomitable Viking warrior – and am perhaps more akin, spiritually and in general lack of thews, to those ancient Scandinavians on the distaff side of our human species.

Which is why, I'll insist, it’s even more appropriate for me to sound an excited huzzah about this show that features a woman who has nothing to do with spinning wool or flax … a woman who is more likely to wield, instead of a distaff, a fine battle-hardened sword with which to separate some offending motherfucker’s bonce from their unworthy neck.

I’m talking here about Shield Maiden, yes, that FronteraFest Long Fringe show in which a TED Talk sort of gig gets an extremely retro variant via 10th-century Sweden. In which one Ingrid Larsdottir, motivational warrior, reveals the untold truth of Viking women warriors as she seeks new recruits.

“But,” say the show notes proffered at the festival website, “cracks in the warrior’s emotional armour reveal a struggle with forces beyond her control.”

Oh yeah – we’ve all been there, haven’t we, brothers and sisters?

But what does that mean, exactly, for a shield maiden? What pre-Valhalla vicissitudes could possibly trouble one so stalwart and fierce and bloodstained as this lissome-limbed Larsdottir?

Reckon you could make your way over to Ground Floor Theatre tonight, or on Thursday or Saturday, and find out for yourself.

Maybe make a night of it, maybe smuggle some leftover lefse or freshly baked krumkake to munch on while you watch.

JUST KEEP YOUR GODDAMN LUTEFISK AWAY FROM THE THEATRE AND OUT OF TEXAS ENTIRELY, YOU HEAR ME?