Mixing Race, Gender, and Improv Is a Heady Cocktail for Two

You get an eyeful of that tall and gangly Quinn Buckner with his glasses and his short tanglemop of ruddy hair and especially his pale skin, and, because Buckner is obviously a white guy, you might think, because those fuckers are everywhere, “Well, here’s another white guy.” 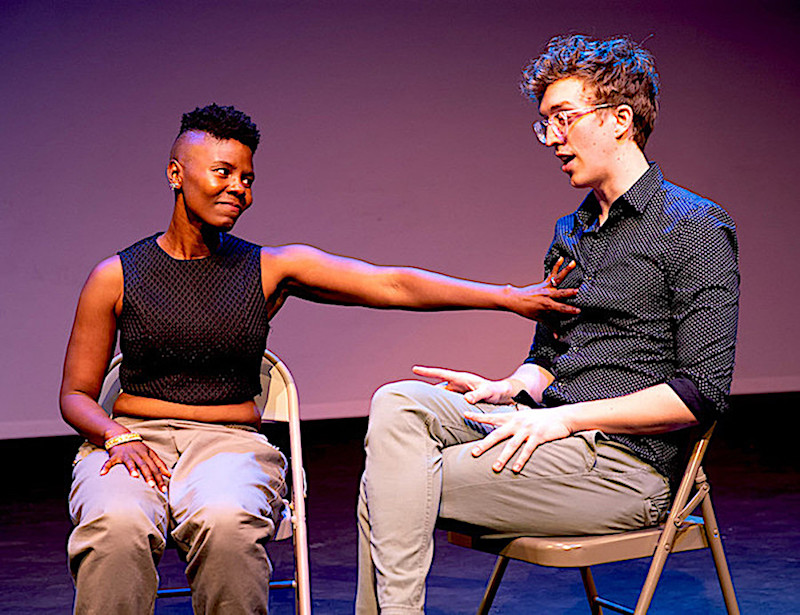 Depending on the circumstances, you might be other than precisely correct.

Because Buckner has teamed up with another of Austin’s many theatrical improvisers – that improv MVP Shannon Stott, to be specific – for a show called Twins that plays every other Wednesday night at the Museum of Human Achievement, all the way through April. And, in this Twins show, Buckner’s mission is to play all of the scenes from Stott’s perspective.

And, unless you can’t tell from the accompanying Steve Rogers Photography image here, there are at least two things in this world that Shannon Stott is not. And those two things are 1) white and 2) male.

So, ah – hey, Quinn Buckner, what’s it like being a black woman?

Austin Chronicle: Wait, is the perspective full of those things, or is the process of doing it full of them?

Buckner: Both, both. The process is a mix of work and fun. Sometimes, when we’re really jiving on it, when we can get into the groove, it’s fun – we’re synced up together and we know what we want, so even when the scene itself might be more sad or, ah, emotional, we’re still like, “Yes! This is what we’re trying to do!” But sometimes it’s like, oh no, I don’t know what she wants, she doesn’t know what she wants, and then we lose track of the show a little, we’re, like, grasping at straws, and –

Stott: When? When does that ever happen?

Stott: That never happens! [she laughs]

Buckner: But it’s always getting easier and easier, because we’re cycling into more of what we were looking for in a show. And it continues to grow. We’ve been doing this – thinking about it, rehearsing it, performing it – for over a year now, and we’re still not at that final product yet. Which is good, too.

Buckner: I sort of approached her – we’ve been friends for a couple of years – five, six, who knows how many? – and I had an idea that I wanted to do something that, like, meant something. Something that was a little more impactful than the, ah, silly make-’em-ups that we do most of the time? And I didn’t know exactly what that was, but I knew that Shannon was – at the time and currently – thinking about that as well. So I asked if she’d like to collaborate on something, and, thankfully, she said yes. And through six months of workshopping what we could do, we came up with this format of Twins.

Chronicle: And you’re doing it at MOHA, which is – well, it’s not one of the main venues, is it? Of those Five Families of Improv in this town?

Stott: Well, people are used to coming to improv for a certain aesthetic. They’re used to a certain thing – an expectation, is what it is – they’re coming to laugh. And we’ve done [the Twins format] in the regular theatres, and maybe the audience has just seen two people doing some scene with one of them being, uh, an inchworm and the other one being a frying pan? I don’t know what, but they’ve just watched that, and it’s pretty wacky, and now they’re watching us? Now their whole world is completely turned on its head, and all this stuff about race and gender is thrown at them, and they’ve gotta get real heady real quick. And then, next group up, they’re right back to watching squirrels or something.

Chronicle: Sure, and so people come to MOHA without expectations of That Wacky Improv Comedy Stuff, and they get y’all’s show. Which runs for how long each time?

Buckner: Theoretically, it’s about an hour. The buffer time comes from having local artists come in, to infuse their own stories into it. So we’ve got poets coming in, a satirical rap group, a band that’s played SXSW – and each one of them, we’re showcasing them in a different way. They might lead into the show, they might play in the middle –

Stott: Or play through it.

Buckner: Or play through it, sure – whatever makes sense for the medium that they’re coming in with.

Chronicle: And what’s it like working in the MOHA?

Buckner: Aaaah, don’t have that be the first thing we say! It’s – it’s a classic space!

Stott: I love it. It’s industrial. It feels gritty in there. It can be transformative and trans-formed into anything we want it to be. It definitely lends itself to take on all different sorts of environments. And I really enjoy that edgy, gritty feel.

Buckner: I think Shannon enjoys that a little more than I do. But I appreciate the space. It’s an awesome idea, that Zac Traeger has created this space that other people can use – all sorts of other people. So we’re doing a show and there’s, like, a jewelry-maker a few feet away, behind closed doors, and there’s a painting class that’s happening down the hall – and we’re doing our show in the set of a different show that’s in the middle of its run. You can feel the artistic collaboration, even if other people aren’t present.

Stott: And we’ve got two light techs who are doing excellent work with the space that we have, and when they’re on it – and when we’re doing what we want in the moment and everything is going well –  it looks great, it’s a beautiful show.

Chronicle: And you’re there through April?

Buckner: For this specific run, yeah. We shacked up with the Museum of Human Achievement, and we applied for a grant with the Austin Community Initiative, so we had to basically cap the run, like “We need this much money for this much time.” And this seemed like a good amount of time – it’s almost half a year – to see how it would work, doing the show outside of an established improv theatre. And ideally, we’re primed to stay with the MOHA after April – if they enjoy our time there – and maybe find an additional space, too, just to continue infusing Twins wherever we can.