Post No Williams: A Vivid Section of the Human Animal

A tripartite view of The Collected Stories of Diane Williams

1) “What these are,” says my Uncle Stan, “are the record of often surreal but hauntingly familiar social misadventures, of the sort of transgressive carnal shenanigans that ensue after a young student of literature visits a secret research library and is bitten by a radioactive Russell Edson.” 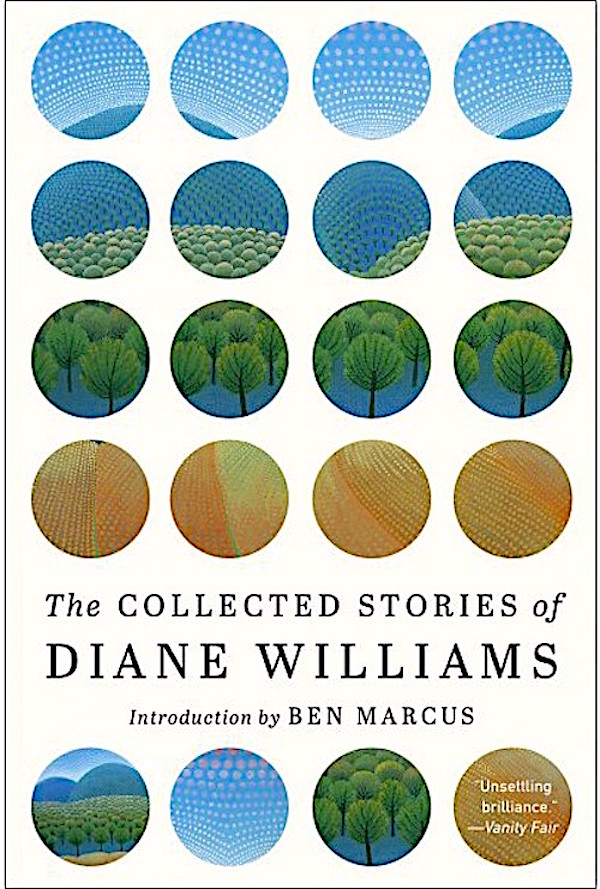 He coughs once, thickly, a longtime smoker’s sound. “That’s highly reductive, of course,” he says – but I'm not sure if he’s referring to his cough or his pronouncement.

“These tales come rushing out for the remainder of the young woman’s years,” continues Stan. “They pour forth like life’s blood from her every orifice, in driblets and drownfalls, until flooded buckets have accrued – buckets! – and eventually the floor buckles beneath their combined weight, and the infrastructure itself and all the adjoining city’s architecture, awash in liquid crystal prose, is dissolved, is subsumed into narrative’s flow.”

“Liquid, you say,” I counter (albeit with a playful wink, because my Uncle Stan always carries a tiny rabid Rottweiler in his breast pocket and he’s not a man to be contradicted by those who wish to remain unsavaged). “And narrative flow, you say, Uncle. But these tales – though springing from a common source hardly less mysterious than once was the Nile’s, and deeply moist with traces of a unifying vernacular – are so discrete in their presentation.”

“You should choose,” says my Uncle Stan, his right hand moving toward the inside of his jacket, whence issues a feral growl, “a less unfortunate homophone.”

2) There is a small box made entirely of mother-of-pearl and within this box are many pearls of various sizes. Each pearl is polished. Each pearl is perfect. Each pearl is a precise sphere of beauty that surrounds the instigating irritant at its center and adds its reflective sheen to that of its many boxmates, causing a concatenation of somewhat identical images to proliferate in the manner of an M.C. Escher headfuck. Also in the box is the writer Ben Marcus, surrounded by pearls but not encapsulated by the substance of pearls, and his head, glabrous though not nacreous, is like a sort of pearl, and in this head his teeth, his pearly whites, they flash as he greets you and offers first one pearl and then another, presenting all the box’s treasures with great pleasure and great pride. You note that, considering Marcus’ current dimensions within the exquisite mother-of-pearl box, a certain Rottweiler of your acquaintance would be in proper scale, and this unnerves you.

3) The world is surely Diane Williams’ oyster. That seems appropriate to the bivalve’s reputation as an aphrodisiac, which is not to say that the author’s characters relentlessly fuck their way through her impressive hundreds of microfictions, nor that Soho Press intends a reader to commit frottage against the hefty handsome hardcover Collected Stories of Diane Williams, nor that a fellow’s wife might place the book beneath the pillow that she’s placed beneath her ass in the interests of abetting copulation, nor that, well, anything of the sort, really. (We should crack a window at this point, do you think?) But the world – so-called civilized – is Williams’ oyster, and her prose shucks like a knife to open a manifold view of the quivering human meat within. And here she is, meanwhile wrangling the writerly brilliance of the annual NOON with her other hand, offering that oyster to everyone. Plenty good chop, oh.