New collection from Instar Books explores love in many forms

Invasions, a collection of short stories by Calvin Gimpelevich – a young author who can be found negotiating a cat-crowded life somewhere along this country’s Pacific coast – is just the thing you want to be reading as the 21st century shifts into higher gear along the road to humanity’s self-destruction. 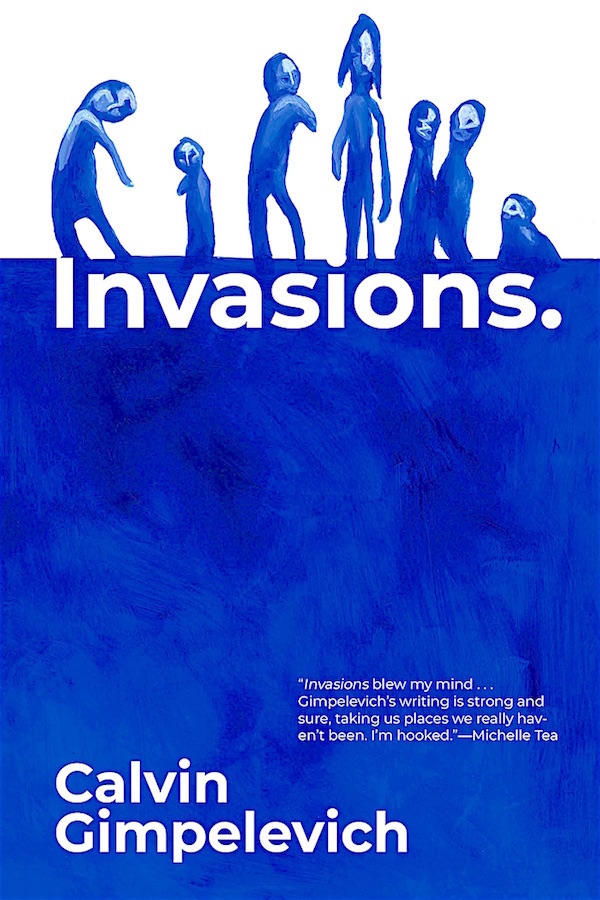 This is not a fact to be denied, because, especially as our pre-apocalypse agenda speeds up, you’ll want to experience work that’s deeply redolent of these times before they’re gone.

This is an assumption that makes no ass of you or me: You’ll want to enjoy writing that’s not so starkly journalistic that there’s nothing creative about it, prose that’s not so literary that it becomes clogged with its own viscid scholarship. You’ll crave stories that are as fresh as they are well-crafted, as striking as they are insightful, and as queer as a three dollar bill fucking a Deutsche Mark.

And Gimpelevich’s collection, Invasions (from Instar Books), is all of those things. In 15 short works of compelling fiction, the author introduces us to diverse characters in some pretty fucked-up situations – such as, in “Wolves,” the catering assistant who gets snowed in with an upper-class wedding party on some mountaintop among Washington’s Central Cascades, and then the power cuts out, and, oh shit. This guy:

Mason and I worked every weekend last summer, racing to finish our setup, horsing around in the sun. He had an on-again-off-again girlfriend, and sometimes, in the off times, we had our own fun. No one knew. The kick came as much from doing what you’re not supposed to – that party/work atmosphere – as the physical thing.

And we meet, in “That Hollywood Stuff,” the celebrity singer who’s being stalked by a mechanic:

She meets the mechanic in a legal boardroom, indoors, big glasses on, and he’s so excited to see her. She thinks she recognizes him from the wall of stalkers her people bring to each show. Yes, he confirms leaving flowers in Denver, sneaking backstage in Memphis, parachuting to the roof of her venue in Austin, and moving cross country to live by her place in L.A.

And in “Rent, Don’t Sell,” a tale that wouldn’t be out of place among the best that the BBC’s Black Mirror has offered, we meet the one-armed military vet Nok Montri, who takes over and exercises fitness-center clients’ bodies for a living:

She knew this body. She rolled her head. Carol’s neck always hurt, stiffness there and in the mid-back. As Nok took over, that tightness released into the latticework of her own tension.

That a body-swapped Nok eventually turns to a life of crime, on the lam with the trans girlfriend she meets among the gym’s employees, is only one twist in the plot that makes this futuristic escapade as thrilling as it is fantastic.

I’ll stop in a moment so as not to make this post “tl;dr,” okay?

But, yes, there are a dozen more such narrative wonderments to be discovered in the new Calvin Gimpelevich collection from Instar Books. And I think – I really think, dear reader, because you’re smart enough to be checking out this review in the first place – that you won’t want to miss any of them while there’s still time.