In a concert evoking winter's cold and darkness, warmth 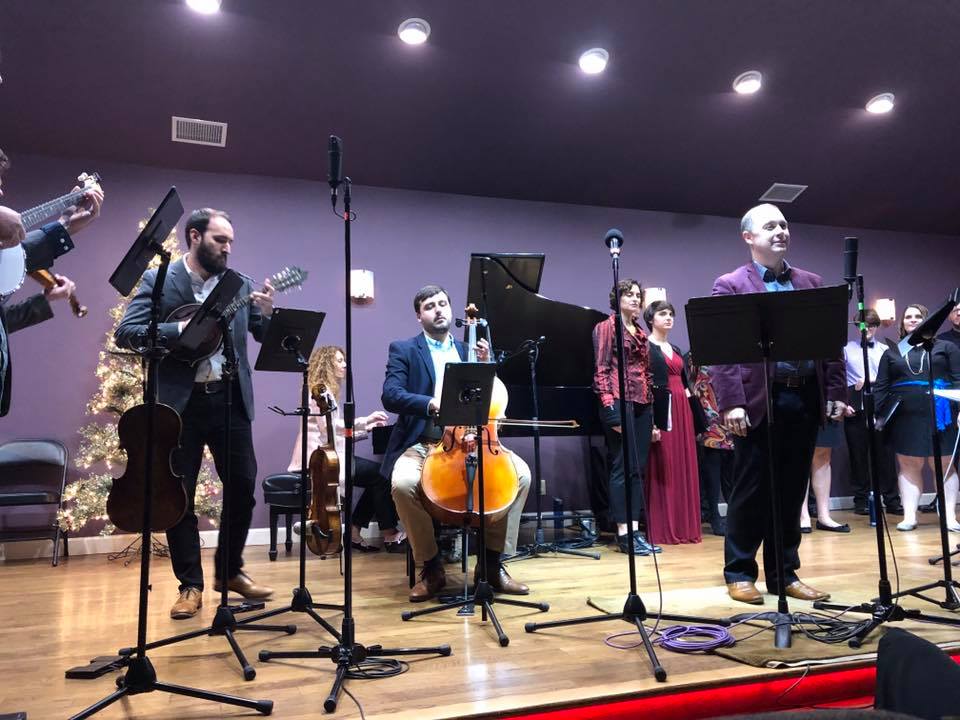 The wind blew, the snow fell, and the darkness of winter enveloped us. And yet we were warmed.
Such was the paradox of Revel’s Existential Solstice, the second concert of the classical music group’s 2018-19 season.

Virtually every musical selection in the program and several of the poems read without music spoke to some aspect of the coldest season, the words pulling into the Blackerby Violin Shop’s Stage and Studio cool shadows, black night, bitter winds, and steep snowdrifts. It should have made the space a frozen wasteland, especially after pianist and Revel Artistic Director Carla McElhaney, in her introductory remarks, addressed the stress and depression that can attend winter’s approach, with fading of the light and the growing pressures of the holidays, and then Ryan Heller and members of Chorus Austin’s Chamber Ensemble opened with a choral setting of “Blow, Blow, Thou Winter Wind,” in which Shakespeare argues that even the biting air isn’t as harsh as human ingratitude. Something in the longest night of the year can spark a dark night of the soul.

Still, for all the talk of darkness and cold, the concert hall proved a comfortable and comforting place throughout the evening. Much of it had to do with the way the music countered the words. Oh, sure, Michael John Trotta’s setting of the verse from As You Like It began with singers imitating the winter wind – an effect heard again in the premiere of the Crystal Veil Suite by Austin composer Stephanie Andrews – then built to some stormy climaxes. But there was also a delicate beauty in Trotta’s harmonies that did for your ears what a shot of Scotch can do for your belly on a frosty eve. The darkness of Joseph Rheinberger's “Die Nacht” fell gently, the singing as soft as the quiet woods described in the text and proceeding at a sedate tempo that inspired reassurance much more than unease. Likewise, the snow in Andrews' work – the "crystal veil" drawn from Emily Dickinson's poem "The Snow," on which the composer based the first section of the suite – was no raging blizzard but powder that had already fallen and covered wood and field and fence post like white lace. Andrews' composition evoked its still beauty, with the viola provided by invoke member Karl Mitze doing much to enrich the charm of the vocal music. This was snow as a blanket, and it provided warmth as blankets do.

But it wasn't just the music that brought the coziness. The spirit of all the people onstage – McElhaney, the musicians of invoke, Heller and his 16 Chamber Ensemble singers, and guest poet Nathan Brown – made Existential Solstice as welcoming as a crackling blaze on the hearth. McElhaney is ever the gracious host, solicitous to guests and audience alike, thanking them for joining her, and generous with her talents – which was apparent here in her accompaniment for many of the choral numbers and in her performance of “Sereno,” a lovely solo instrumental by now-local composer Carlos Cordero. From the stage, Brown paid tribute to McElhaney – specifically, to her gift for connecting people, and the talent in this program alone made it easy to see what he meant. For his part, Brown brought levity and feeling to the evening, through his poems from the recent collections An Honest Day’s Prayer, An Honest Day’s Ode, and An Honest Day’s Confession. His open manner, easy eloquence, and wit led us through the darkened woods of human existence to a garden of heartwarming insight. The program took its name from one of his poems, in which he states that "the day that offers/the least amount of light –/rates as my favorite of the year," the reason being "I smell more beauty/in the winter of things." He adds that "autumn’s slow leak into December/teaches us to hold hands/as we come to grips with endings…"

It's a little flame of an idea to cup our hands around as the night lengthens and the chill descends. And it was one of many reasons that when it came to this program, there was little distance between “solstice” and solace.”

Addendum: Speaking of solace, here's a note to allay your dismay if you missed this concert. It was part of this season's Revel Radio Project, in which all three concerts are being recorded for broadcast on radio station KMFA Classical 89.5. Existential Solstice will air Sun., Dec. 16, at 6pm. To learn more, visit KMFA's website or Facebook page.

Seen / Soon: Dec. 15
A grand send-off to musical theatre at UT with The Drowsy Chaperone and feeding off the solstice darkness with Carla McElhaney and invoke