Our savvy arts reprobate has a few suggestions for you, comma, citizen

And here come two days of blessed Central Texas weather like some lover seducing you beyond the confines of whatever glorified box of a dwelling you hole up in when it’s miserable. 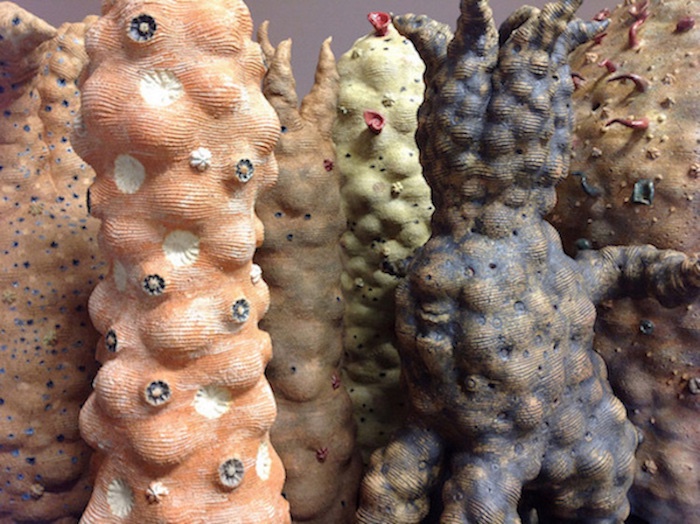 A gathering of those Jamie Lea Wade claywork creations, located in the Canopy warren of studios

And, because those two previous items mean that you’re probably jonesing to get your EAST on like never before … here’s a brief list of recommended stops, to help you decide among the 500-plus possibilities almost bullying this city with their powerful, creation-backed tyranny of choice.

Do we even have to namecheck Canopy, as if that epicenter of creative industry (run by the Big Medium honchos who started this whole thing) won’t be packed with appreciative crowds? We kind of already covered it, if only obliquely, in this issue's feature about the Saturday Night grand opening of new artschool Atelier Dojo. And of course there’s Steve Parker’s prizewinning War Tuba right there in the middle of it all. And ICOSA. And Modern Rocks. And, nota bene, you should never leave that compound without checking out the studio of Jess & Jamie Lea Wade – because the sculptures and paintings you’ll witness in there (Bldg 1, #106) are beautiful and creepy and like nothing you’ll see anywhere else. 916 Springdale.

Likewise, your Chronicle’s already provided some consideration to Dimension Gallery’s current offerings … but we’re gonna go ahead and amplify the huzzah for Ian Ingram’s “Five Skin Ten Skin” exhibition – because we look at the marvels he’s wrought, and the painstaking implications of their creation, and we can’t fucking even. Dimension’s ongoing Paved Garden is always a delight, too – and that path will lead you to Jessica Nieri's Blackfeather Vintage Works shop next door, where John T. Newman’s got a show of paintings called “Dream Life in Ecuador.” 979 Springdale.

And you know that our seemingly omnipresent artscene reporter Melany Jean has already posted her EAST recommendations, yes?

And here’s where I tell you how half of the Dimension Gallery’s ruling commissariat (okay, it’s a lovely marriage situation), Moya McIntyre, has curated a show at a different site – a show called “The Femme Abstract” that features art by Stella Alesi, Caitlin G. McCollom, Rebecca Bennett, Cherie Weaver, Vy Ngo, Terra Goolsby, Brooke Gassiot, and more. (Whoa: Virginia Fleck’s Cascade: Collective Thirst literally pours from the rafters.) The show’s in the warehouse space at 1300 E. Fifth – and, in that same venue: Alejandra Almuelle’s astonishing “Journey” installation of ceramic sculpture. Tell you what: If you can walk through that building of wonderments without a substantial portion of your head’s interior forever changed, then you probably can’t pass a Turing test. 1300 E. Fifth.

So, yes, it’s 2018, and are you sick of us pimping Adreon Henry yet? Sorry, but the man’s multilayered work is as compelling as ever. And, srsly, how could we not mention his “Runs on Time” show in which local badass cordwainers Helm Boots are debuting their new Adreon boot? That’s in the ol' Bolm Studios complex, of course – and what better to accompany those well-made boots than the garb that upcycling legend Krissy Teegerstrom’s got for sale in her Featherweight Studio in the same rugged row? 3505 Bolm.

Cloud Tree Studio’s Brian David Johnson has his exquisite resin-inscribed wooden vases and sculptures on display among the array of ceramics and jewelry from studio regulars, and – hey, that Rachel Koper’s showing her new paintings here, too, this year. 3411 E. Fifth.

What else, what else? So much else, yeah, and we reckon you’ll have stories to tell about your EAST adventures for years to come, no matter what parts you check out. So let’s cut to the chase – or, rather, to the finish. Let’s note that there's a Sunday Night closing party at Shirinyoku: Forest Bathing, where Mackenzie Huffman, Jonathan Paul Jackson, and Little Pink Monster’s Annie Wells have been exploring the stillness and the movement of the forest through live performance, projection, video, sculpture, and sound. 1913 E. 17th.

Yes, that’s the party we choose to note.

Yes, there are other parties.

(There are always other parties.)