Review: Until the Flood 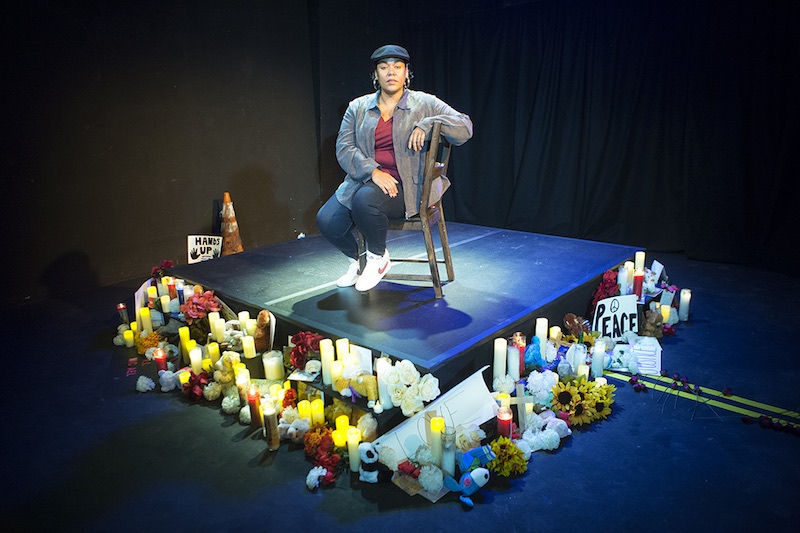 There is a serenity to the space, with its dozens of glowing candles, flowers, and stuffed animals ringing the raised stage. It’s clearly a memorial to someone gone, the kind that springs up for victims of tragedy, those who have been killed unexpectedly, unjustly, and since we’ve seen so many of these – too many – we sense the sorrow surrounding it.

But because there are no mourners present, no voices stirring the air, no movement beyond the flicker of light, the shrine marks out a quiet, calm, sacred space. When actor Florinda Bryant steps into it, she seems to be entering the eye of a storm where the wind doesn’t blow, where the rain doesn’t fall, where she can speak and be heard. Which is vital, because she has much to say, and we need to listen.

What we need to listen to is Ferguson. The residents of the Missouri town where 18-year-old Michael Brown, a black man, was gunned down by police officer Darren Wilson, a white man – the ones who felt their home hit like a hurricane by the killing and all the turbulence in its wake – have perspectives on that tragedy like no one else’s, and they can tell us a lot, not necessarily about the shooting and what actually happened between Brown and Wilson, but about what goes on in a town where that kind of killing can occur: the racism, both overt and casual; the struggle to live, much less build a life, in the face of oppression; the desperation that struggle instills in the oppressed to get out in any way possible; the blindness of white liberals, who may not lack for empathy but still lack an understanding of what life is like for blacks in this country. Playwright Dael Orlandersmith spent time in Ferguson gathering thoughts and feelings from many of the people there and used them as the basis for Until the Flood, a series of monologues by eight characters – not literal residents of Ferguson, but figures created by Orlandersmith to represent those residents, to speak their truths without being bound by biography or language.

As the playwright has done when she’s performed the piece, Bryant plays all eight characters in Theatre en Bloc’s production, staged with simplicity and sensitivity by Jenny Lavery. It’s a daunting challenge, in part because of the range of humanity she has to portray – women and men, blacks and whites, youths and retirees – but mostly because of the depth of feeling the speeches demand. Characters relate events that sparked in them extremes of fear, humiliation, rejection, compassion, and, in one instance, rage fueled by the most virulent form of bigotry. To be a person of color and have to espouse a white man’s seething desire to shoot down blacks as a form of “purification” seems an almost unbearable burden, but Bryant shoulders it with no visible effort. Indeed, in keeping with the serenity of the setting (Blake Addyson provided the shrine), Bryant maintains an air of calm about herself throughout. Mostly, we see it between monologues, as she moves to a table on which various notebooks are laid, chooses one, and brings it forward to read from as she embodies a new character; her pace is unhurried, her movements easy. But even when she gives herself over to one of these figures – whether it’s Louisa, the former schoolteacher in her 70s; Hassan, the 17-year-old street kid; or even Dougray, the 30-something racist – Bryant does so with the grace of a benediction. She simply becomes these other people. And in that metamorphosis lies the revelation of this production: Bryant allows us to see one person as many, to see the connections among all of these people in Ferguson, and, by extension, to see the connections between the people of Ferguson and us, to understand that what goes on there, the thoughts, the feelings, the struggles, the prejudice, the hate and the hope, are going on in our town and in towns throughout this country. In this sacred space, we are given the opportunity to listen and learn, to confront the racism and fear and pain of Ferguson and to claim it as our own.