Calling it a rally would be a step too far, but it was clear that the Texas Book Festival crowd this year wanted to talk politics. Fortunately, as the opener to the weekend’s events, Cecile Richards was ready to deliver. 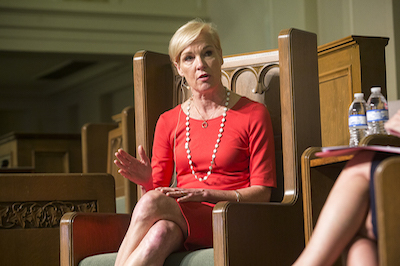 There to discuss her new memoir, Make Trouble, with Judge Gisela Triana, Richards’ talk spanned discussions of her family’s legacy of activism and her tenure as Planned Parenthood president. She detailed her time at Brown University, where she “majored in history and minored in troublemaking,” and discussed her role in preserving women’s healthcare as Trump’s presidency brought calls to defund Planned Parenthood.

While these stories of the past were evocative and interesting, Richards was most powerful and in command of the crowd when she discussed the future. The audience – full of Beto shirts and early voting stickers – erupted when Richards proclaimed, “Change is coming in America.” The tension in the room was palpable as she confessed that she expected both wins and losses for Democrats in the upcoming elections. Though none of these declarations were especially new or shocking, they gained depth by virtue of their speaker. You don’t have to have read her memoir to know that Richards’ history of revolt is impressive. As a college student, she skipped her own graduation to man the "Divest from South Africa" banner. As an adult, she became famous as she protected women’s healthcare from Paul Ryan and Trump. Richards clearly has the mettle to back up the manifesto, which is why, when she called for action from the crowd gathered, she also received an ovation.

With dwindling days left until the midterm elections, Richards spoke with a call to action that went beyond basic book promotion. When asked what’s next, she made no mention of her new writerly title: “I’m just here to here to get every single good person I know elected.”