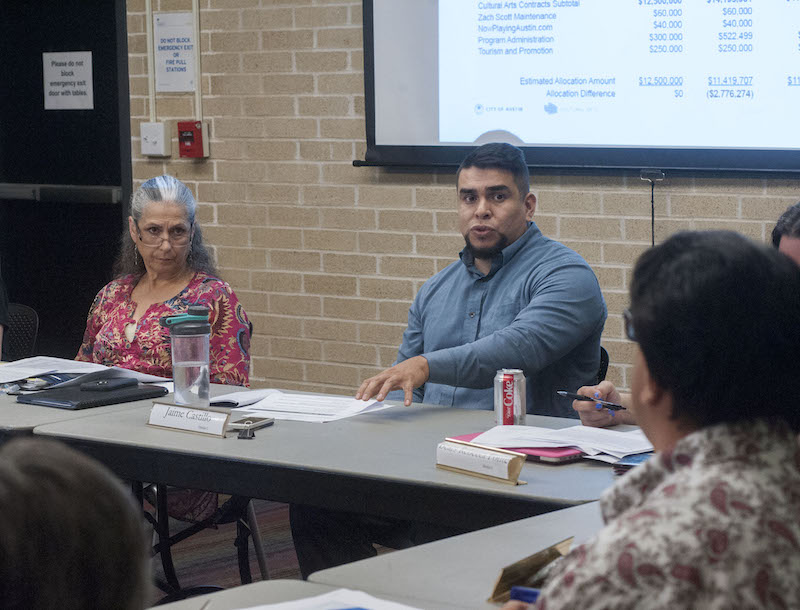 After recipients of city cultural support reacted strongly to deep cuts in funding for FY 19, the Arts Commission had a working group reconsider the matrix by which funding amounts were formulated. It managed to cap cuts at 11% of FY 18 levels, and the Commission approved the new funding recommendations on Sept. 24. Now, they go to City Council.

In the time between the Arts Commission meeting on Sept. 17 – at which scores of arts community members showed up to express their frustration with the severity of the cuts (15-45%), as well as the lack of warning that they were coming and other issues in this year's funding process – and the meeting on Sept 24, commissioners engaged in what Vice Chair Michelle Polgar characterized as "a triage effort." Funding was pulled from other programs in the Cultural Contracts budget – notably, Community Initiatives, which provides support for small organizations and individual artists, and the TEMPO temporary art program – and added to the pot of money for applicants, and a 5% reserve routinely set aside as contingency money was retained for the same purpose.

Altogether, that boosted the original $11.3 million in available Hotel Occupancy Tax funds to $12.47 million, just under the $12.5 million allocated to applicants last year. It would've kept funding levels level with FY 18, except for the fact that almost 100 new applicants were approved for funding this year. So Commission Chair Jaime Salvador Castillo, Polgar, and commissioners Lulu Flores and Felipe Garza, along with Cultural Arts Division staff, scrambled to find a formula that would minimize the damage. Flores told the crowd at the Sept. 24 meeting of their understanding that "it's never easy to receive cuts in funding. Based on the limitations that we had and the money that we had, we did our best to mitigate the losses to those groups that were hit the hardest."

The end result was that no recipient had its funding cut by more than 11% from its FY 18 level. While the attendees were quick to acknowledge the difference between a 40% cut and an 11% cut, and their appreciation of the commissioners' hard work on their behalf was evident through applause and comments during citizens communication, the cuts still hurt. Among the organizations receiving upward of $58,000 in funding, 16 were still taking a hit of $20,000, and another 14 were taking losses between $10,000 and $20,000. That was serious enough to cause some present to stress to the Commission once again how heavily the cuts would affect their organizations and to plead for their funding from last year to be fully restored. And some of the pleas exposed divisions between established groups and newer ones, groups with larger budgets and those with smaller, and groups on different sides of cultural and racial lines.

Indeed, how Austin's cultural contracts system has addressed equity in funding to populations that haven't been included or served to the extent that mainstream populations have was addressed repeatedly at the meeting as a good news/bad news component of the FY 19 funding squeeze. "One of the reasons we’re in the situation we’re in," said Polgar, "is because we’ve been so mindful and so thoughtful about how we dealt with trying to provide access to organizations that have historically had [less access]." CAD staffer Jesus Pantel had the numbers in his presentation to the commissioners: Of the 427 applicants for arts funding this year, 133 were ALAANA applicants – an acronym denoting African-American, Latino, Asian-American, Arab-American, and Native American – and that was a 55% increase over the previous year. Garza noted that CAD received "the highest number of minority applicants than we ever had before" and credited outreach efforts and funding application workshops for the surge. (This was, it's worth noting, in the same speech in which Garza made repeated references to the "advantages" that organizations receiving the largest cultural contracts have and how the people in those organizations "do not represent the community of Austin," prompting protests from the crowd.) So, yea! The recipients of city arts funding are more diverse than ever now. And because we were so successful at that, it's cut into our ability to fund everyone at the levels we have in the past.

That rationale didn't sit well with some artists, even those who didn't take a funding hit. "I’ve seen the journey and evolution of this arts community, and I’m a great believer in the culture of diversity," said Sally Jacques, artistic director of Blue Lapis Light, which didn't experience a cut, "but funding 99% of new applicants is not real" – a reference to the fact that 421 of this year's 427 applicants scored a 75 or higher on their applications and were thus entitled to receive funding. "You can apply four, five, six, seven times to the NEA before you’re funded. I was funded by the NEA before I was funded by the city of Austin. To have gone to this extreme is not healthy for this community," she added, before calling for “common sense” in the process.

The exceedingly high approval rating for new applicants. an apparent lack of expertise among many of this year’s Peer Panelists, the lack of transparency throughout the funding process, and the lateness of notification that significant cuts were coming are among several concerns that applicants would like to see addressed in the future, along with a review of the Arts Funding Matrix, which has been in place since 2005. The Commission expressed interest in addressing those issues as well. "It doesn't end tonight," said Castillo in his final words to both his fellow commissioners and the crowd before taking a vote on the new funding recommendations. He urged commissioners to listen when someone brings concerns to them, and he urged the crowd to keep coming to the Commission meetings: "Join us. Speak to us. Tell us where it hurts." The Commission passed the reloaded Matrix funding recommendations. They are scheduled to be taken up by Council at its meeting Thu., Oct. 4. For the Council agenda, visit the City of Austin website.