What inspired Sherry Thomas to turn Sherlock into Charlotte? Local author Sherry Thomas had genre-hopped before, having built a following with a blend of YA fantasy (the Elementals trilogy), Victorian romance (the Fitzhugh series), and homages to the Chinese martial art adventure genre wuxia (The Heart of Blade duology). But taking on a cultural icon as revered as Sherlock Holmes?

That was a gamble – especially when her key concept was putting Holmes’ famous intellect in the body of a Victorian woman, whose gender would make Scotland Yard even less likely to take her insights seriously. But it paid off handsomely when the first two books in her Lady Sherlock series – A Study in Scarlet Women and A Scandal in Belgravia – met with enthusiastic reviews from fans and critics alike.

Thomas spoke to the Chronicle previously about how she molded her heroine. With the third Lady Sherlock novel, The Hollow of Fear, being released Oct. 2 and the author launching it with a reading and signing at BookPeople the same night, she's returned to share a little bit about her craft and the ways in which romance speaks to how we value women.

Austin Chronicle: So you’ve shared before the story of how you decided to become an author – because you wanted to write something better than a book you were reading. Do you find that similar desire to improve or enrich the source material has informed your work on the Lady Sherlock series?

AC: Well, to me that says that you’re someone who sees other people’s benchmarks and wonders what you could do – if you could do the same or better than them, and I wondered if there was that same sense of challenge when you were approaching the Sherlock Holmes canon.

ST: Oh, right! I don’t think it was the case of exactly that? It was more that – do you remember when the BBC Sherlock first came out?

ST: Remember how exciting that was? Oh, it was so stylistic, so fresh! And somehow managed to use the current war in Afghanistan perfectly, because, you know, a hundred and twenty-five years ago, that’s the war Dr. Watson fought in. Usually when I see something I really like, I go, “Oh, I wish I could do that!” And in this case, my question was immediately, “Well, how else can you do this?” And then basically, my next thought was, “Well, if they have moved it the 21st century and if Elementary on CBS has already given us a female Watson, pretty much the only thing left to do is make Sherlock a female character!” [Laughs] That was more or less the evolution of my thinking process. And, actually, when I immediately had the idea, I turned around and asked my young adult publisher – because I also sometimes write books for the YA audience – and asked whether they would be interested. But that didn’t fly, so it was like, “Well, let’s see if I can pitch it to the folks who publish my romances!” Because at that time I was kind of running out of ideas of what to write and I thought, “This is something I’m really excited about and let’s see if they will bite!” And for that, then, I wanted to capitalize on the audience I had already built, which was the audience for historical romances, so I thought, “Sherlock Holmes was set right around that time, in the late Victorian era, which is a time period that I’m used to playing in,” so then I thought, “Let’s see if this will fly!”

AC: You mention romance. I think no one would disagree that it’s been given the short shrift by the general literary community –

AC: – no doubt because it’s considered a women’s genre. But the NY Times has finally hired a romance fiction columnist and in the past couple of months we’ve seen a couple of contemporary romance novels break into the quote unquote literary mainstream with The Wedding Date and The Kiss Quotient. As someone who started their career writing romance, I was wondering if you felt a sea change.

ST: [Sighs] Well, this is what I’ve always said: Romance and romance’s place will rise and fall with women’s place in society. Because if you look at science fiction, if you look at fantasy, they used to very much be the dime store pulp. And nowadays, no one would say to a man who writes science fiction, “When are you going to write a real book?” At least, I haven’t heard such a complaint from a male science fiction writer in a very long time! [Laughs] That’s because the men who grew up reading these books are in power now, they influence culture, they decide what’s acceptable. Science fiction and fantasy have very much been mainstreamed because the people who read them are your CEOs, they are your lawyers, accountants. So, my view has always been, romance will have the same place [as science fiction and fantasy] when women actually are equal in society. Until then, we’ll see dribbles and drabbles of improvement, maybe, but not wholesale. The sea change [in romance] will come not a moment before the sea change in real society. What women enjoy is generally considered frivolous, unworthy of attention from the wider society, so as long as that attitude endures, romance will always be second class literature. [Laughs] Or third – fourth.

AC: As far as moving from working primarily in the romance genre, I’m curious about how the writing process changes. With the Lady Sherlock series, you’re not just remixing cases from the Arthur Conan Doyle canon, you’re also crafting a mystery. Do you feel like structurally your writing style has changed?

ST: No, it hasn’t changed at all because I’m not somebody who’s good at writing – I won’t say I’m not good at writing plot, but I’m not good at writing plot outlines. So I always go into a book with only a vague idea of what it will turn out to be at the end. Romance, young adult, mystery – it’s the same process. I will discard something at the 10,000-word mark, I will discard everything and restart because I go, “Oh, that’s the wrong approach or the wrong execution or something.” And usually by the time I get to the 40,000[-word] mark, I will go back to the beginning and rewrite what I have, either to push in a slightly different direction or just to expand it. And then I somehow manage to produce a full draft, which is very rough, which I liken it to – you’re painting your walls, right? The first draft is everything you can do with rollers. And after that, you have to start blocking out your windows and doors with masking tape and using the finer brush. So the subsequent drafts are for that. It hasn’t changed because I’m writing mystery. In fact, it’s more that way because I reverse-engineer the plot a lot of times! [Laughs] Like I will write and write and go, “Something needs to happen here! What needs to happen here?” [Laughs] And then I go, “Okay, maybe X-Y-Z needs to happen here,” and then I look back and go, “Okay, for X-Y-Z to happen here, then, you know, three chapters prior, A-B-C needs to have happened.” So it keeps going like this all the way to the end.

Sherry Thomas will read from and sign copies of The Hollow of Fear Tue., Oct. 2, 7pm, at BookPeople, 603 N. Lamar. For more information, visit the BookPeople website. 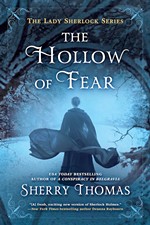 Review: The Hollow of Fear
Charlotte Holmes is back, and the stakes are higher than ever