Okay, I’m kind of working the sports allusions up there, yeah – but it’s not to be helped, citizen. 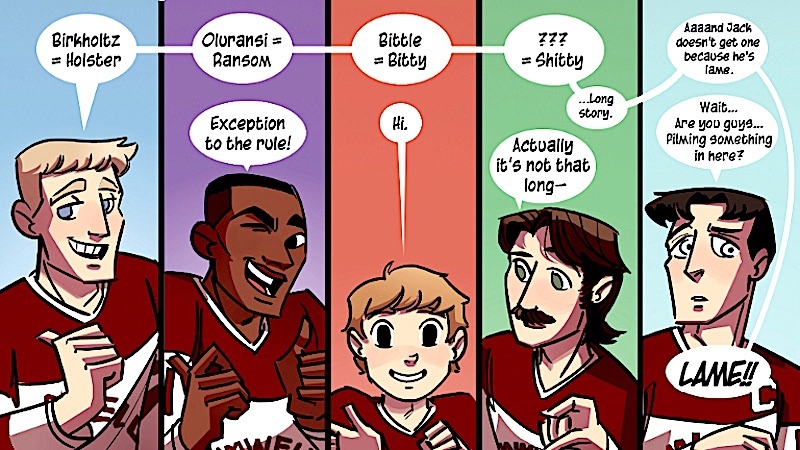 Puckish fellows, all. Especially that Shitty.

For one thing, it – the collected stories of Check, Please! – has put an awful big smile on my face. And, for another, it’s got me thinking about *shudder* ice-based athletic competition. Also, it’s made me want to eat some really good pie. Or maybe even some mediocre pie, what the hell. As long as it’s fresh from the oven. Or not. Just … please … doesn’t anybody have some pie, any kind of pie, to share right now?

(Pardon me while I dig an old pastry from the back of the Chronicle’s leftover-crowded fridge and attempt to stave off further cravings? Thanks.)

You probably know that Staple! The Independent Media Expo is a sort of annual smorgasbord of sweet and savory printed wonderments from the local (and international) indie comics-and-fandom scene, as fomented year after year by one Chris “Uncle Staple” Nicholas and his mysterious cadre of skilled associates. And you might even know that we’ve covered the event so often in the past that there’s really nothing fresh we could say about it, just a bit more of the usual, “Yes, well done! More of this, please!”

Or anyway it’s an easier gambit to focus on one of Staple!’s honored guests – and there are a decent array of them, as ever, this year – because many of them are worthy of celebration but still new enough to have eluded reportage, until now, in this more general journo arena.

ENTER – as it would probably say in all caps within some yellow starburst on the cover of a Marvel silver-age comic with pencils by Kirby and inks by Steranko and colors by Severin – ENTER, UKAZU!

Ngozi Ukazu, that is, as noted above. Native Texan, Yale grad, SCAD alumna, current Austin resident. Writer, artist, all-around creator of Check, Please!, the most successfully Kickstarted webcomic in the history of Kickstarter. Young, brilliant, funny, and *sigh* too pretty for words.

I met up with Ukazu in one of the outposts of Austin’s ever-expanding Barley Bean recently, because I’d read the first volume of Check, Please! and had been thereby enchanted, and I knew the author was coming to Staple! and I wanted to somehow preview that … and so I asked her a bunch of questions that, if you’ve already read this far, the answers to which will likely delight and certainly inform you:

Austin Chronicle: So, you’re from Atlanta.

Ngozi Ukazu: I’m from Houston. You listened to, maybe, an NPR article?

AC: Huh, yeah? That damned thing. I Googled you up, and the NPR link –

AC: – said you were raised in Atlanta.

Ukazu: Yeah, no, I did an interview with NPR, and they said I was from Atlanta. I was like, “C’mon, guys, where’d you get that information?” Yeah, I’m from Houston.

AC: But now here you are in Austin.

Ukazu: I moved to Austin right after grad school. I wanted to be close to family, but, you know, not too close? And Austin is, ah – no offense to Houston –

Ukazu: Well, I can’t. I may shun you – 713! But Austin’s just a little more hip, and – everything’s closer. It’s like such a small big city at the same time. It’s huge, but it feels small. Boston is a big city, but it [shakes her head]. And I like that, when my friends come to visit, there’s already like a laundry list of things to do, no matter the weather or time here. Like, in Houston, what do you do when your friends are in town? You take ‘em to the museums. But in Austin, you can take them to the river, take them to see the bats. There’s so many food trucks, you could just have a food truck day. There’s live music, all the different neighborhoods, there’s hiking! I was a tour guide in college, so I might sound a little biased and enthusiastic.

AC: You gave tours around Boston?

Ukazu: No, I went to Yale for undergrad, so –

Ukazu: New Haven! I even loved New Haven when I was there. I tell people about that place and I get excited.

AC: So what are the worst things about Austin?

Ukazu: Well, the summer’s been really, really hot. And – hmmm, something I like the least about Austin … oh! The traffic! It’s so bad. There’s that one bottleneck off 290, going to MoPac? It goes for about a mile. No one thought that through: Of course everybody’s trying to get to MoPac.

AC: Exactly, and – okay, getting away from the Austin thing … your Check, Please! is so amazing.

AC: No – I don’t like any sports! Except maybe volleyball. Which is why it seems weird: Why do I love this thing? It’s because of you, I’m blaming you.

Ukazu: Well, thank you! Thank you for reading it.

AC: Well, it’s so readable. To put it mildly. And, I’m also seeing, its fandom is vast.

AC: So I’m wondering what fandoms do you partake of? What are some of your favorite …

Ukazu: Well, I – oh, duh! My Hero Academia. I was gonna say “I don’t really have a comics fandom,” but there’s a manga called My Hero Academia – Boku no Hīrō Akademia – that started in … 2015? A few years back. And it’s like the first comic series that I ever – well, I mean, in a while. Growing up, I, um – oh my gosh, talking about my heroes makes me insane. But I watched all those Batman and Superman cartoons – the Bruce Timm animated series – and the comics I read were Justice League International, which is basically the Nineties sitcom version of a comic. It was a Nineties sitcom masquerading as a comic. And I read a ton of manga. I think the first manga that I can remember was Tokyo Mew Mew. Which was perfect for a 13-year-old girl, about girls in high school who are basically Sailor Moon – but they turn into cats and they fight. Yeah, it was great! And also in middle school, I read – and it was somewhat formative – Kevin Smith’s Green Arrow book Quiver. I think I read that back-to-front twice. So if you take all those together, you probably get my comics heritage. But, currently, My Hero Academia is, yeah, the best superhero comic being made – it puts Marvel and DC to shame.

AC: Okay, and here’s your Check, Please! And here comes Year Four of it, and then that’s it? It’s over? The whole thing is just … ?

Ukazu: [makes noise like Lisa Simpson being suddenly strangled] Um, I’ve been really into superheroes, now that you bring it up. But the superhero story that I’ve been gestating in my head, it isn’t really for, like a lot of superhero stories, 12-year-old boys. It’s more like for 14- to 18-year-old girls – like a YA comic. A Young Adult comic that’s just about teens. And hopefully with a fresher voice. An old editor would, like, tell me to write like I’m writing from the point of view of someone who remembers being in high school, and, kind of, wanting to – ah, how do I explain it? It’s, ah, it’s a superhero story – but with a fresh take. More social media, more memes. More kids thinking about fandom and being online.

Ukazu: Well, I did complete that screenplay. I wrote a screenplay about a college hockey player – very serious, tackling issues of toxic masculinity and homophobia. And I think it was, ah, it had a lot of funny moments – but it was still pretty dark. And I think – especially in college, or if you’re in certain types of environment – you want to prove yourself by writing A Very Serious Work? And I just, I – that’s not my tendency. I grew up watching sitcoms and I love cartoons, and I think that one of the highest forms of art is good comedy. I do like drama, and I like comedy that has good drama, but – I can’t stay there too long.

AC: Yeah, nothing about Check, Please! is dark – for too long –

AC: But even though it’s comedy? I – I mean, I have a problem with things like “Oh, this is good because it’s serious, and this is bad because it’s not serious.” You know? It’s a comedy, sure, but I find nothing unserious about Check, Please! It’s real people dealing with real problems.

Ukazu: Yeah – but it’s not the stereotype for an Adult Novel. That’s always, like, an English professor who falls in love with an undergrad – and they end up getting a divorce. So it’s not one of those, yeah, I don’t know. I feel like because Check, Please! just deals with real issues, and the characters tend to be more lighthearted, and it’s fun … [shakes head] It can still be serious and tackle serious issues.