Kaci Beeler: Perfect Servings for One

So Kaci Beeler’s got herself an artshow, how ‘bout that? 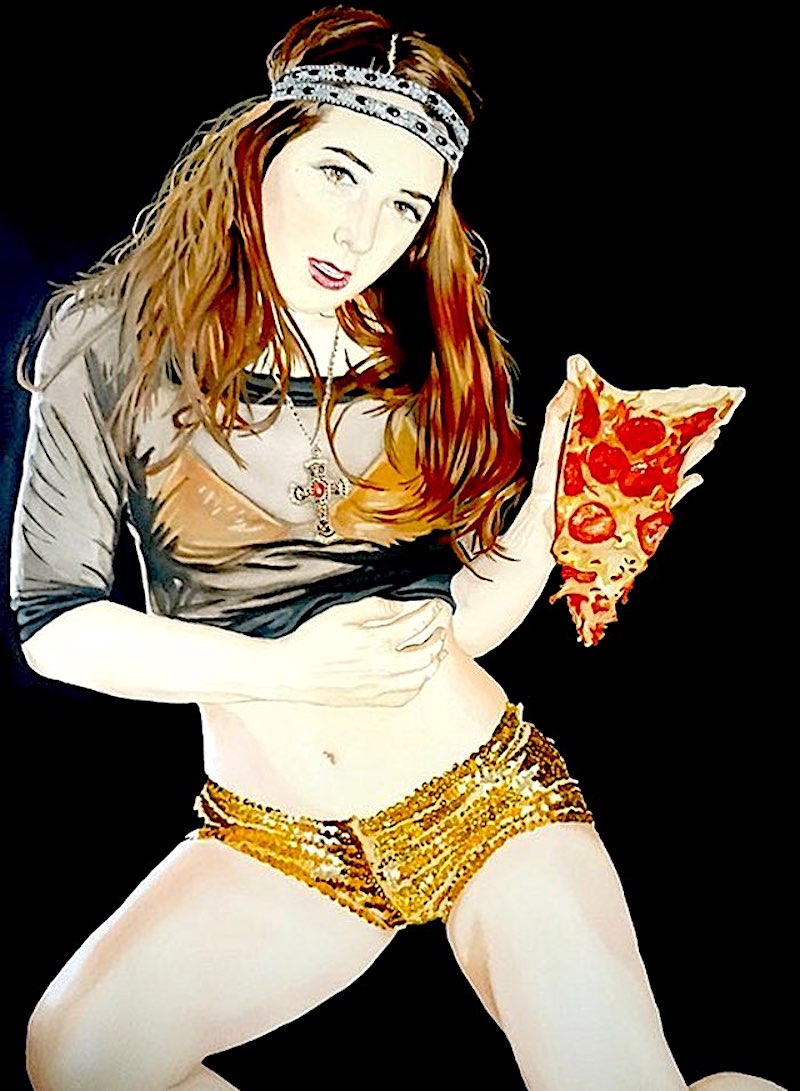 You’d think the woman wouldn’t have time for an artshow. But then, you might also think she wouldn’t have time to do half the other things she does, either. It’s a reference point in your reporter’s household: “Ah, shit,” my wife or I will complain about our respective workloads, “I’m as busy as Kaci Beeler!”

[Or we might say, “I’m as busy as Graham Reynolds!” – but that’s another story.]

Still, it’s not really a surprise, this “Perfect Servings for One” exhibition at St. Edward’s University that opens to the public with a reception on Thursday, August 30. Beeler, in addition to her many other relentless activities, has been painting for years now, has had her artwork on the walls of various galleries around town and featured in the pages of glossy national magazines. And since St. Ed’s has an ongoing but infrequent series of shows featuring work by alumni, and Beeler graduated (Bachelor of Arts, summa cum laude) from that excellent institution in 2009, this show makes perfect sense. You might even say it’s about goddamn time. Right?

Well, let's see what the woman herself has to say …

Kaci Beeler: It’s an honor to be asked, honestly. Because I know some people might be like, “Oh, a university gallery,” but St. Ed’s features a lot of fantastic artists – and they don’t feature that many per year. So to be asked feels really good.

Beeler: I am keeping it secret. There’s gonna be a photographer there, so there’ll be evidence after the fact, if you miss it – but obviously it’s better to experience it in person.

Brenner: But word on the street – okay, Facebook – is that there’s some kind of provocative sexual element to the, ah, it’s called “Cake,” right?

Brenner: And this isn’t something a visual artist usually does for an opening, is it? I mean, sometimes, sure, performances are part of, but – how’d this come about?

Beeler: When St. Ed’s asked me to do the show, they said, “Do you have any new work?” And I have eight new paintings that haven’t been seen in public, and now I get to show them all together – along with my earlier food paintings. But they were like, “We know you’re a playwright and an actor, too, so – do you wanna do some performance art?” And I said yes to them before I even knew what I was going to do. I was like, I’ll figure it out. And an idea came to me when I was in Finland with Parallelogramophonograph. We were talking over drinks late one night – but the sun doesn’t really set there, so it was still like daytime – and Kareem and Roy and I were discussing things, and we sort of jammed on an idea. And I took that seed and ran with it from there – so there’ll be props and costumes and music and cake. There’s real cake involved.

Brenner: Are you baking the cake?

Beeler: I think so. I need to test it out – and if something goes really wrong, then I’m gonna buy the cake. But, yeah, the plan for me is to make the cake – and curate the look of the table setting that the cake will be on, and the costume of the character that I’ll be embodying.

Brenner: Is this character someone people might recognize from one of your shows, or … ?

Beeler: No, it’s a new character, new kind of character – but it’s tied into everything. There’s definite shades of Killer Girls, this play I wrote and directed for American Berserk Theatre, there’s shades of that in it. And also shades of my self-portraits that were in the “grayDUCK 5K” show. And those portraits will also be up at the St. Ed’s gallery.

Brenner: These new paintings, though, the new eight. Are they the ones you painted in … was it Tulum, in Mexico?

Brenner: And why were you in Tulum?

Beeler: When I’m in Austin, it’s hard to get personal work done. Because I feel like, with all the different things I freelance-do, I wind up getting pulled in a lot of directions. I’m always doing different commissions: Commissioned paintings, commissioned murals, and now I’m getting commissioned to write things for people. And the acting work, and improv gigs, and teaching improv – so many things! And I’d been thinking, for maybe a year or two, Okay, I’m going to make some really large pieces. I’m going to do it!

Brenner: But things … got in the way?

Beeler: Well, I started American Berserk Theatre with Curtis Luciani, and things just keep piling on and didn’t really stop. And I kind of got to a point where – I did too many things last year, and I started to burn out. So I needed to escape, and I knew I had to get out of Austin – I had to leave the city to get peace. People say, “Take a staycation!” But, no, I had to get out of the city. So I started looking at New Mexico, something out in the desert. But that seemed a little too lonely – I am an extrovert – and I thought Mexico wouldn’t be too expensive, although I wasn’t quite ready for Mexico City. And I looked into Cancun, and there was a lot of, ah, gang activity. But I heard a lot of great things about Tulum, it’s a kind of artsy beachside town, it’s smaller and a bit safer if I’m gonna be, you know, a smallish woman just hanging out by myself. I’m strong – but not that strong. And then it was like, “If I’m gonna go away, I have to have a preoccupation.” And I’d been wanting to make some paintings, and so it seemed like a good call to give myself that task. And then I was overly ambitious about it – because that’s one of my problems. I was like, “I’m gonna make a large painting a day! Yeah – a large, like, three-foot-by-three-foot painting, every day!”

Because the artist finished eight large paintings and then she took a break. Can you believe that shit? As if she were on vacation or something, right? Jesus. The temerity of some of these, whattayacallit, creative types …

Still, though: Eight never-before-exhibited paintings. An array of Beeler’s earlier food portraits. The self-portraits from that grayDUCK show a few years ago. And a live performance at the opening reception.

Yeah, we’re thinking this “Perfect Servings for One” show at St. Ed’s will be well worth checking out.