Abel Saucedo’s painting Tunnel Runner shows a man bisected. His lower half is unseen, submerged in a dark hole. Above ground, he supports himself, arms braced, head lowered as if in prayer. Behind him, a wall splits the frame into foreground and background, each a shade of gray. His white shirt is pulled taut as he hoists himself into America. 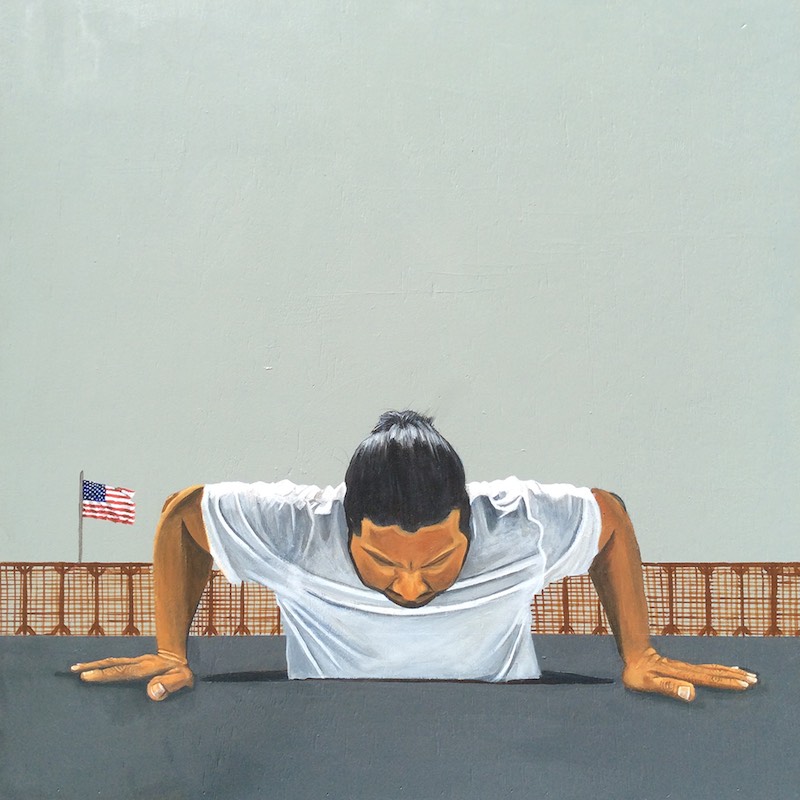 This stark composition visually presents the violence of forcing into two spaces what was naturally one, a point of examination in any show concerning itself with a border. For Mexic-Arte’s 23rd Young Latinx Artists group show, guest curator Rocha-Rochelli has sought out 11 artists to explore “the complexities of the U.S./Mexico border region.” The title of the show alone reveals much of its contents: “Young Latinx Artists 23: Beyond Walls, Between Gates, Under Bridges.” The x serves as a bridge between binaries, and the litany of prepositional phrases convey the constantly shifting situational relationships between the creators and their subjects and the border, an unavoidable and certainly complex material reality.

Moving through the show, I identify two sections: the first an overt exploration of the bureaucratic political realities of the borderland and how dwellers on both sides navigate them. Saucedo’s painting is in this section of the show. The border wall is a bifurcating presence in the painting, and the strain of the man’s journey is evident in his posture and stark positioning. The work recalls the fact that many refer to the border as a scar, a metaphor that aligns with the violent actuality of its presence. Nearby, Natalia Rocafuerte’s installation Home Is Where My Papers Are presents a closed door with a welcome mat laid out. On the mat is a representation of Rocafuerte’s permanent resident card, a conditional welcome. Posted on the other side of the door is a small employment authorization card, marked “not valid for reentry to U.S.,” a preceding step in her immigration process. The depiction is wholly unsubtle, but then these are situations where subtlety is not afforded. Rocafuerte takes the images of her imposed by a prejudicial state – visas, resident cards, passports – and reclaims them. 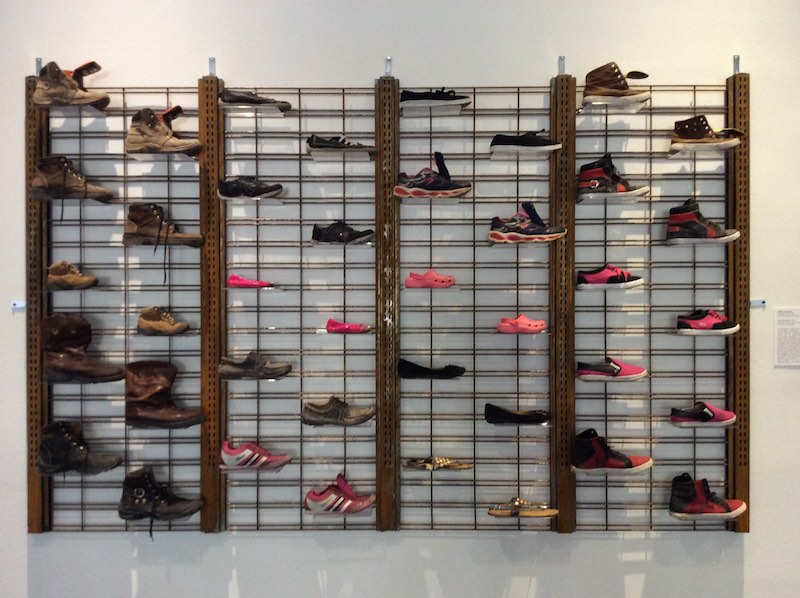 On the wall opposite Rocafuerte’s piece is an installation that apes a shoe store wall display, only here the shoes are worn bare, gathered from migrants at the border. In exchange, Abel Saucedo offered them a new pair. Again, the symbol and the literal are flattened. The stakes and sacrifices are made clear.

In a second section, to the right of the first, the complexities of the border region are situated, no less politically, at home, in the day-to-day. Throughout these works, the everyday art and imagery that permeates Mexican and Mexican-American culture is employed in both celebration and critique of these cultures. Lisette Chavez’s installation fills a small chapel with religious iconography, the Virgen de Guadalupe and Christ on the cross, draped in tacky gems and beads. A fuchsia prayer stool in the center of the space reads in sequins, first on the top cushion where the devoted would clasp hands, “sorry,” then, below where she would place her knees, “not sorry.” The space is flooded with the sacred and the profane, heretic confessions framed on the wall. A sense of indignation, “not sorry,” pervades the space even as it revels in the images of what is clearly felt to be a repressive religion, “sorry.” Both.

Ana Treviño’s video installation El Otro Lado – “the other side” – compiles family vacation footage from the 1990s with more recent video documentation of her trips to Mexico. Throughout the short video, she can be heard talking with her mother, moving between Spanish and English, often within the same sentence. Both languages are translated into subtitles that run along the bottom. She asks why her parents made such an effort to familiarize her with Mexico, and her mother replies, in Spanish, “It was to help shape your identity.” Even so, it is clear the artist’s self-identity is ambiguous. She feels neither wholly American nor wholly Mexican.

At one point in the video, someone refers to Texas and the subtitles translate the state as simply “la frontera,” the border. The synonymity and intractability of the two, Texas and the border, is evident. The moment sent me to activist and poet Gloria Anzaldúa’s book by the same name, Borderlands/La Frontera: The New Mestiza, where she writes: “We distinguish between mexicanos del otro lado and mexicanos de este lado. Deep in our hearts we believe that being Mexican has nothing to do with which country one lives in. Being Mexican is a state of soul – not one of mind, not one of citizenship. Neither eagle nor serpent, but both. And like the ocean, neither animal respects borders.” Twenty-three years ago, Mexic-Arte was putting together its first YLA group show. That same year, 1996, President Clinton signed the Illegal Immigration Reform and Immigrant Responsibility Act, which spiked deportation and detention and stalled paths to citizenship. In 2018, the show comes in conjunction with a brutal acceleration of longstanding immigration groundwork, an enforcement of brutal “zero tolerance” policies that continue to leave children incarcerated, separated from their families, and families with increasingly few and increasingly dreadful options.

What does it mean at this moment to gather a group of young artists and display them based on a shared marginalized ethnicity? A politicized existence means the creation of any art is inherently political, an assertion for the right to space and the safety to create. Even so, the YLA show takes specific aims, highlighting the tensions and contradictions of border life, seeking not refuge, but rather reflection and, in some cases, a reckoning.