Everything you need to know about Raymond Chandler's classic

Raymond Chandler, born in Chicago in 1888, raised mostly in London, fought in the trenches in World War I, dogged by failure, identity crisis, and alcoholism. Flopped as a poet and journalist. Fired from a high-paying job as an oil executive. Focus came in 1932 when he retyped a Dashiell Hammett story and studied every line, word, and nuance. Black Mask magazine published his first original, “Blackmailers Don’t Shoot,” and he was off and running, also writing for Dime Detective and other pulps. zin 1939, Knopf offered a contract for his first novel, The Big Sleep, which was a product of cannibalized and refined short stories previously published. The Big Sleep was a bestseller, a hit movie with Humphrey Bogart and Lauren Bacall, and many of its scenarios, motifs, and one-liners became part of our collective memory. Chandler’s legacy was further cemented by the six novels that followed, as well as his screenplays for the films Double Indemnity and The Blue Dahlia. Arguably, The Big Sleep is the work that still seems unequaled by Chandler himself, his contemporaries, or later authors.

This is a book that I’ve read at least a dozen times before, and now, after being treated to the astounding feast of detail from notes on historical and biographical context, geography, slang definitions, etc., provided by the editors, I know I’ll be reading it again soon. As Jonathan Lethem says in a short intro, “The Big Sleep doesn’t. It never even nods. Flip the book open anywhere and it winks, leers, bristles, sulks, and sneers – in every line, a ‘quick jerky smile plays across’ the face of the prose.” The velocity of the story is a product of the author’s internal conflicts, plus his “ethical and artistic sensibility,” which bleeds into every gesture, pause, and vivid incantation on the page. 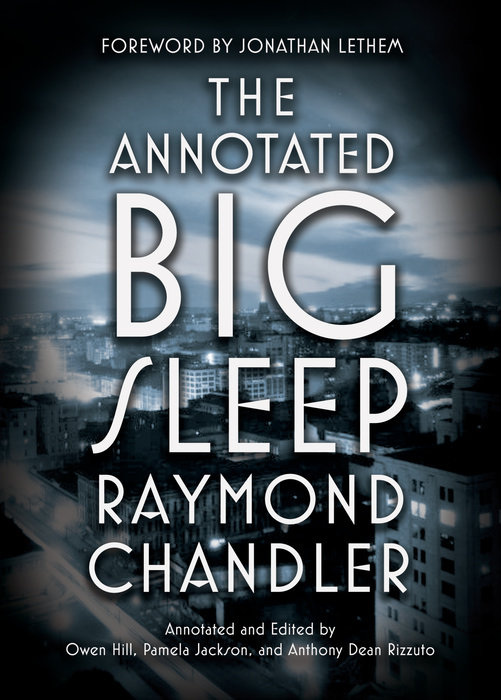 The editors start with an opening essay and pages of footnotes well before the book’s famously crystallizing opening paragraph, as the detective Philip Marlowe answers a call at the Sternwood estate in Hollywood.

It was about eleven o’clock in the morning, mid October, with the sun not shining and a look of hard wet rain in the clearness of the foothills. I was wearing my powder-blue suit, with dark blue shirt, tie and display handkerchief, black brogues, black wool socks with clocks on them. I was neat, clean, shave and sober, and I didn’t care who knew it. I was everything the well-dressed private detective ought to be. I was calling on four million dollars.

A full page of notes follows this opening, accompanied by a photo of Greystone Mansion in Beverly Hills. We are told about the tradition of telling the time throughout a mystery story, which apparently began with Edgar Allan Poe, with examples by Anthony Conan Doyle, George Simenon, and Chester Himes. I learned for the first time that “clocks” on socks did not mean they had a picture of a clock on them, but that the term simply meant patterned socks. “Neat, clean, and sober” is “army talk for ‘ready for inspection.’” There are more contextual details, but what I liked was the comment that the very first line is “a surprisingly poetic way to say that it’s overcast and rainy.” It’s a line that not only sounds great to the ear, but when you deconstruct it, you realize the implicit notice to expect something different, i.e., we’re in California, but it’s not the sunny California you’ve heard about before from other detective writers.

Any dedicated student of The Big Sleep might feel that they know the implications of all the bits of symbolism Chandler packs into each scene – for example, the stained glass panel in the Sternwood mansion showing a knight in armor rescuing a half-naked lady tied to a tree. Marlowe ruminates about this image, deciding that the knight doesn’t seem to be trying hard enough to free her, leaving the implication hanging: Is the knight savoring the predicament, or does Marlowe think he would do a more efficient job if he were in the situation? Similarly, the dedicated student of detective fiction might assume that he or she could supply all the annotations necessary to the text, while regarding some of the notes in this edition to be overkill – for example, definitions of common slang terms like “swell” and “bounced.” No, think again. The Big Sleep is poetry. Every line is lyrical, packed with nuance and symbolism. They’ve been worked like a master sculptor working a block of marble. The page where that little sister from hell, Carmen Sternwood, enters, has at least one annotation per line. No, it’s not overkill. Slowing down the speeding train of Chandler’s poetry forces you to linger on every line, and you know what? Every single line – every article and punctuation mark – is perfect.

And why quibble? A few years from now, there could be a whole generation of people who never complimented a woman by saying she looked swell or confessed that he was single because his girlfriend had bounced him to the curb. Or that the emotionally damaged daughter of an oil millionaire-times-four (about $70 million today, adjusted for inflation), of pale complexion, glistening teeth, and a taste for laudanum, had a nasty habit of reacting to rejections from men by plugging them with a roscoe, sending them off to The Big Sleep.

This is an awesome tribute to an awesome book. If you’re not interested, listen, pal, you can just drift.