This machine is temperamental but it will give you things

Well, bleak me the fuck out.

And then do it again, please, Nick Drnaso. Because even the tastiest vinegar, when a person’s finally done sipping at it, makes the next bite of plain bread – the very stuff of life, right? – makes that bread taste so goddam sweet. 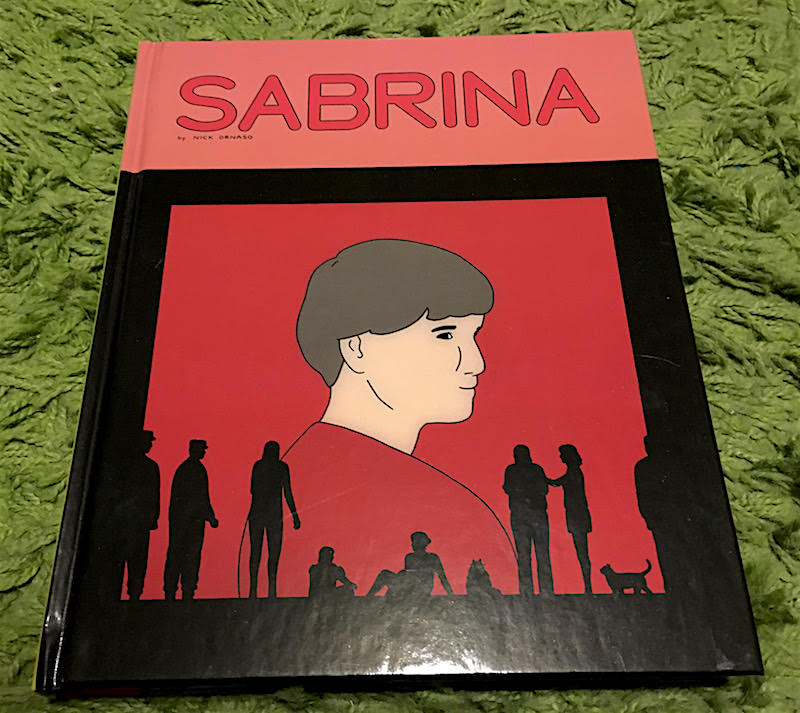 The object itself, on a green shag rug in a house somewhere in the suburbs surrounding Austin, Texas.

And a spoonful of sugar, as some character in a Disney property reminds us, helps the medicine go down.

What I mean here is that this Drnaso’s first graphic novel, Sabrina – like his previous book, the short graphic stories collected under the title Beverly – is an astonishing production that depicts humanity near its most numb, most mundanely cruel, most hurt and hurting. As, as too often obtains in the real world, a twitching arrangement of meat barely held together by atrophied ligaments of empathy.

All powerfully rendered with simple lines, austere scenes, muted and shadowy colors, proceeding at a steady, unhurried pace … toward its indictment of our species.

Sean Rogers, writing in Canada’s Globe and Mail, had this to say about that earlier Beverly: “Drnaso’s diagnosis of the sickness at the soul of sheltered communities is novel in its discordant effects and keen observation.”

Well, somewhat novel for comics, anyway, I’d suggest – and even then more in agreement with the “discordant effects” than with the “keen observation.” Because of Chris Ware’s Jimmy Corrigan, to name the most obvious example … although, ah, I suppose Ware's work is more evocative of individual souls than the soul of communities, sheltered or otherwise? And, okay, maybe "sickness" would be a wild overstatement in the Corrigan context … ?

Ware himself, reviewing Sabrina in The Guardian, says of Drnaso’s new work, “What’s most curious and, ultimately, valuable about this book is that it is not a crime story; it’s a perspicacious and chilling analysis of the nature of trust and truth and the erosion of both in the age of the internet – and especially, in the age of Trump.”

Because Sabrina is about the complex aftermath of a woman being abducted and tortured and killed – but the narrative doesn’t depict that horrific event, instead exploring the act’s consequences as embodied day-by-day by the woman’s boyfriend, her family and friends, and the relentless, conspiracy-obsessed factions of a voyeuristic and media-provoked nation.

(DId I, as part of the media, just provoke you with the phrase “abducted and tortured and killed,” reader? Are you now more likely to check out Sabrina for yourself because of that? And if I wonder if we’re all just sick little monkeys, is that more of an insult to our simian cousins?)

The tone and verisimilitude of Drnaso’s work reminds me of nothing so much as the stories of Beth Nugent, in her City of Boys collection, in her novel Live Girls. The unrelenting bleakness of effect there. The bleakness, oh bloody Christ: Such that one’s own lived experience seems frivolous in comparison, as if one were a cutie-marked pony trotting forever carefree through the bright meadows of Equestria.

You know what I’m saying? I don’t know why I find such perspective – Nugent’s, Drnaso’s – so compelling. Maybe because it not only provides a contrast to make my own fleeting days seem more delightful, more readily enjoyed; but because that bleakness also, on some deep level, when it's this carefully presented, tastes of truth. Which is healthy, right, truth? Supposed to be good for you? At least in small doses?

Medicine, like. Whether it goes down easy or not.

(I don’t know how to pronounce Drnaso’s surname. And sometimes, while reading Beverly and Sabrina and needing a break from the intensity, I imagine it written as Dr. Naso – like it’s the name of some supervillain from the more typically heroic side of comics. “Behold, the uncanny Dr. Naso! Wielding his terrible Bleak-a-nator! Wreaking existential havoc on the unsuspecting populace of Gotham!” Heh.)

This Sabrina’s in hardcover, by the way, its 200-plus pages published by Drawn & Quarterly. If you know D&Q at all, you know the book is gorgeously produced; and this one, glossy-covered, seems like an almost lacquered object.

Must be something about the play of light upon the surface there, above those depths.