The Winner by Karl Stevens

On the afternoon of the last day I saw Karl Stevens alive, I used a large rock to bash out the rear valence window on the driver’s side of my Toyota Echo. 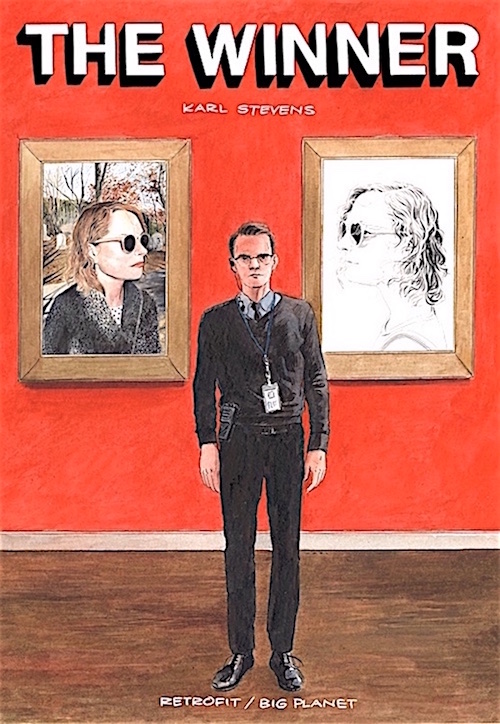 This was because we were at the Zilker Botanical Garden, Stevens and his wife Alexis and I, and I had (accidentally) locked my keys in the car.

Also, it was during SXSW and the entire fucking city of Austin was in the thrall of hipster-ridden, celebrity-spiked, traffic-coagulating festival madness, so the Pop-A-Lock people wouldn’t be able to come and save my goofy ass for, they told me over the phone, at least another hour.

Which, I felt, was way too long to stand around and continue being locked out of my own car. Especially because of how stupid it looked, of how embarrassing a situation it was to be in, with this smart and funny couple I’d met just the day before and wanted to impress as being, if not equally smart and funny, at least passingly capable. Vis-a-vis embodying a reasonably coherent adult existence.

And I figured it’d look a lot less pathetic – hell, it’d be almost Bruce-Willis-in-the-first-Die-Hard-movie manly – if I just went ahead and smashed in my Echo’s window and accessed the keys that way.

So, as Karl and Alexis left to stroll further along the ZBG’s paths of curated flora, I did.

That was in 2013, and I still haven’t gotten the window replaced. It serves as a reminder of how easily I can lure myself into folly, a memento mori for my occasional lapses of reason – lapses that are best, my wife Katherine will gladly agree, avoided.

It’s such reason that insists I point out to you that Karl Stevens isn’t actually dead.

I haven’t seen the man alive since he and Alexis went back to Massachusetts after their SXSW sojourn, no, but that’s only because I haven’t seen him at all since then. But, see, phrasing it the way I did, that made this post’s opening sentence so much more compelling, didn’t it? But now maybe you’re annoyed. Maybe you’re feeling a little cheated, kind of duped by my attempt at finessing confusion into engagement?

And maybe that’s why Stevens’ new book The Winner, and his earlier volumes of portraits and narrative art, are less popular than, say, Are You There, Thanos? It’s Me, Iron Man or much of whatever passes for hoi polloi relevance in the graphic-novel scene these days. A confusion is maybe why, I mean.

Not that, unlike your reporter’s opening gambit, Stevens intends any confusion at all.

“Am I a painter or am I a cartoonist?” the artist wonders aloud in one beautifully watercolored vignette near the beginning of this new perfectbound volume from Retrofit Comics. “I need to choose,” he tells Alexis. “The fine art world thinks I’m just an illustrator, and the comics world thinks I’m a painter. I mean, if they think of me at all.”

“You should do what you feel like doing,” his wife tells him.

Stevens’ comics, his panels, are painstaking representations of daily life – penciled and inked into delicately crosshatched realism, often brought to normal-vision verisimilitude with a subtle palette of watercolors. These are evidence of the sort of technical precision and graphic style that so many figurative artists only aspire to, the kind of things, when they’re in discrete frames and sans word-balloons, improve the walls of any hightoned gallery of portraits. They don’t look at all comic-booky, is the thing. And yet the images are often sequential – across panels or even pages of panels depicting a conversation or silent interlude. So we get an intimate view of the artist’s quotidian life, of his serious discussions or clever banterings with Alexis (upon whose lovely visage he lavishes much adoring and impressive effort in scene after scene) … and this is what leads “the fine art world” to judge him, as he says, “just an illustrator.”

Yeah, well. This Stevens is “just an illustrator” the way Zaphod Beeblebrox is “just this guy, y’know.”

Karl Stevens, visually recording portions of his day-to-day existence, so precisely limning the physical details of people and objects in that personal realm, he’s like … he’s like … well, if Andrew Hussie’s Homestuck can be effectively compared to James Joyce’s Ulysses – and it can – then it can be said of Stevens that he’s like if Samuel Johnson were simultaneously his own Boswell: He’s living his life and creating the work, and, in much of that work, recording and commenting on living his life and creating the work.

But it’s not just the recognizably real world that’s going on in this book. It’s not just Stevens musing on, for instance, how much more lucid, how much more of a winner, he is now that he’s been sober for a year. Not just a glimpse of what it’s like to work as an art museum security guard. It’s not just him and Alexis sitting and watching the sun set on some gorgeous beach. (Although it’s all of that, too.)

Because Stevens, see, he, ah … because the dude gets into some totally fucked-up, absolutely deadpan hilarious, kooky aliens-and-wizards-and-magical-felines fantasy shit: The kind of thing that makes Dr. Strange’s wilder adventures seem like a slow day at the local Kiwanis Club. (I mean, let’s hear it for the awe-inspiring majesty and wisdom of Pope Cat! All praise Pope Cat! And try not to hear His divine pronouncements in the same voice as that of Lynda Barry’s beat-poet poodle Fred Milton!) And these illustrated flights of the imagination, episodes in mindblowing counterpoint to the IRL material, are almost half of the book: Delightfully so, and rendered with the same high level of care and precision. That this affable goofing also adds another layer to the interiority of the individual we see self-depicted in the less psychedelic pages of The Winner, well, that’s some fine lagniappe.

So, yes, my car’s rear valence window has, much to my wife’s chagrin, gone unrepaired all these years and remains a gaping hole. But, no, Karl Stevens isn’t dead. The Boston-based artist is very much alive, and, in fact, better than ever. As is this new collection of his – which I’ll bet your personal library would thank you kindly for the acquisition of.