Austin’s Fallout Theater Phoenixes up from The New Movement Ashes

A person would have to be a total goofball to start off by saying “There sure was a lot of fallout to deal with, following the contentious break-up of what used to be called The New Movement comedy school and theatre.” 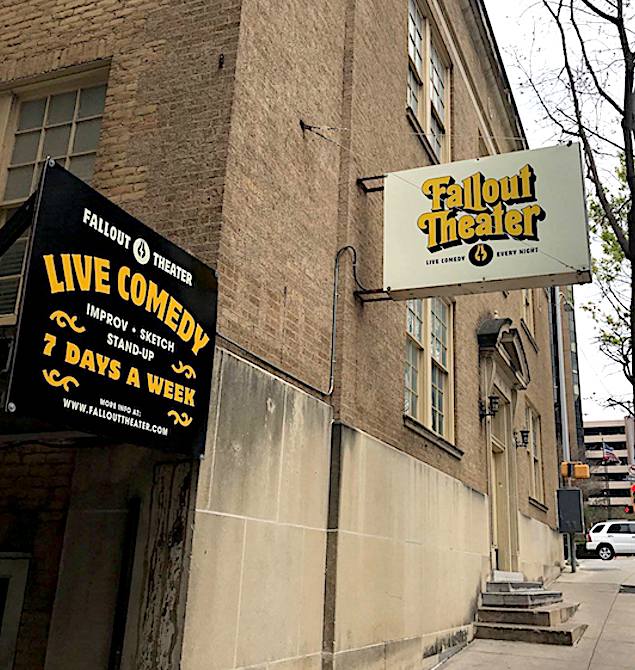 Because The New Movement’s break-up – resulting from multiple allegations of sexual misconduct and general abuse-of-power by previous owners Chris Trew and Tami Nelson, who also owned and ran the TNM franchise in New Orleans – and that break-up’s fallout has nothing to do with the name of what the former powerhouse of comedy has become: The Fallout Theater.

“We’re part of the York Rite building Downtown,” says Carlos LaRotta, one of the team leading the current powerhouse of comedy toward a brighter and more transparent incarnation in the same location. “Our space used to be the building’s fallout shelter,” says LaRotta, “that’s where the new name came from.”

And it’s always been a good spot for a comedy club, too, because you think “underground comedy,” and there’s your Fallout venue: literally underground.

“Well,” adds Virgil Shelby, another of the Fallout’s board of directors, “they added windows and took out the lead plates years ago, so now it doesn’t exactly hold up to bomb-shelter standards, but …”

Shelby and LaRotta laugh – as does Arielle LaGuette, another of the new governing board. There are five board members – Aaron Walther and Robert Segovia are the remaining two – but it’s these three who are sitting down for a what’s-up-with-y’all convo with your Chronicle reporter at a local coffeehouse.

(Let’s not be coy: We were at Thunderbird on Manor, because we fucking love that place.)

And LaRotta and Shelby and LaGuette had a lot to say about their company’s situation post-TNM, to be sure. Much of it was passionate and concerned, and some of it was organizational minutiae that only policy wonks would appreciate – although it’s a good sign that this crew is passionate about that brass-tacks sort of thing, too – and so we’re going to give you just the highlights here, to provide the basics of what you can expect from Austin’s new Fallout Theater and why, and we’ll leave all that tl;dr for another time.

Austin Chronicle: Okay, so the shit starts hitting the fan at TNM in New Orleans. And what happens here in Austin? How did that play out?

Arielle LaGuette: When things started coming through the pipeline from our sister theatre in New Orleans, Austin acted quickly in solidarity with them, and immediately shows started not being charged. So we didn’t have any revenue coming in and we were all kind of working for the love of the theatre and hoping we’d remain in the space for as long as possible. But it was pretty daunting, in maybe that this would be the end, and this home that we have on Lavaca, that people have loved for years and years, was maybe about to take a turn. So a transition committee was put in place. And, really, getting that together was pretty much a Google sheet that went out to our Facebook group, saying “Okay, what’s your expertise? What can you bring to the table in terms of skills? Put it in the spreadsheet!” And I remember putting in Sales – I’m good at contract negotiations, things I’m doing in my normal day-to-day. Whatever people could do, that could potentially help in a committee that will 1) get the bills paid and 2) get people coming into the space.

Virgil Shelby: And we got through it with the help of the entire community. We had someone who’s in real estate help us amend our lease. We acquired a lawyer that was recommended to us by that same Realtor, to help us with the paperwork to form our LLC. We started conversations to negotiate, with Chris and Tami, the transfer of all the assets in the theatre, along with the promise of transferring the lease over. And over the course of another month or so, it all kind of happened … It was like simultaneously picking up a broken thing and building it at the same time.

LaGuette: While it was still working.

Shelby: Yeah, the theatre closed for maybe one day in that entire time.

LaGuette: The day we found out about everything.

Shelby: And after that, we were like, “Let’s just keep going.”

AC: Once you had the lease transferred. But, ah, that step, how was that?

LaGuette: It’s amazing how amicably the transfer went. I don’t know what any of us expected … but we were like, “Well, we’re just gonna do what we have to do, and hopefully it all comes together.” And we realized that we had to talk to Chris and Tami, so we had multiple conference calls, we had ontracts going back and forth. And they were very supportive. I think, in the end, they know that they had a hand in building a community that just started thriving on its own years ago. Austin was centrally run on its own, even though there was financial support from the owners who were living in New Orleans. And the reason things were able to transition so quickly was that we had the commitment and the passion from people here who were already running shows seven nights a week.

Shelby: We basically got an in-good-faith agreement with Chris and Tami that, ah, they sort of postured that they were interested in transferring the ownership to us. So we asked them, can we set up a third-party account, so that all revenue generated goes there, and then that money will be transferred to our new ownership. That way no one was able to touch the money unless it was for a theatre-related expense – but it couldn’t go to Chris and it couldn’t go directly to us. So we got that – they were very amenable to a lot of things. It wasn’t a pitched battle of wills or anything. It was like, “Let’s keep this place open. Let’s make sure the community stays alive. And let’s make sure that the people that wanna run this place can run this place.” There were a few wrinkles to iron out, but we ended up with pretty much everything that we wanted.

LaGuette: We have a Director of Staff on board. And we hired Cody Dearing as Conservatory Director. And Mason Pitluk as the Artistic Director. And Rachel Austin as the Creative Director. And we’re really stoked about those hirings – because they’re all powerhouses in the improv community, but also generally highly trusted individuals as well. It’s also really amazing, the amount of support we’ve received from the Hideout and Coldtowne, the Institution, and MerlinWorks. When all of the chaos was happening, we received so many emails and Facebook messages, so many people who were genuinely supportive of “Hey, we’re behind you all the way. If you need any advice, we’ve owned theatres for like ten years, we know how it goes, let us know if you need anything.” And that’s by virtue of Austin being a place that’s very supportive of its artistic community, but also its comedy community. The people involved are so close-knit even though the scene is growing every year.

LaRotta: Coldtowne even offered to have our classes in their own conservatory.

AC: I hear that, in other cities, separate companies like that would probably be at each other’s throats, a more dog-eat-dog kind of situation. But here …

LaGuette: It’s kind of like the music scene, too. I feel like musicians are very competetive in other cities, but here it’s a more supportive scene.

Shelby: One of the scariest things for this community was the possibility of losing a stage. Even though all five of the companies are, by nature, competitors – we’re all trying to get a piece of the same pie – the pie is rather large, and no one’s quite gotten the lion’s share yet. And to lose the support of a venue, a space for building the comedy scene in Austin, that would’ve been a devastating loss to everyone. And people made good on those emails and messages offering help. We had people meeting with us to help us with business strategy, offering advice on establishing codes of conduct, and guidelines for running a theatre – things you wouldn’t expect from a competitor.

LaGuette: The Hideout knew we had the monthly show “The Neighborhood,” Amy Jordan’s longrunning sketch show, and they knew it was gonna be disrupted by the turmoil. And they offered to add it to their Saturday slots, like, “Hey we’ve got these available – you want ‘em?”

LaGuette: And how is that happening? [laughs] I don’t know, but it is!

AC: Do y’all have a new website with show schedules and general info?

Shelby: Falloutcomedy.com is our website, and it’s got a link to our shows that are listed on Eventbrite. And it’s got a list of our classes – and we’ve rolled out a full array of those. It’s really gearing up.

LaGuette: And we also rent out the venue sometimes: This year we were an official Moontower Comedy venue.

Shelby: And an official SXSW venue next year – hopefully. And we’re reaching out to other festivals. We’re gonna be a partner venue with Austin Sketch Fest.

AC: And so, now that all of this shit’s been gone through and you’re on the other side of it, pretty much – what new things are going on at the Fallout?

LaRotta: Right now, we’re continuing with what was set up already – we’re scheduled through June. And we’re currently working on what comes after that.

LaGuette: But there is one new thing already – which TNM never did before. Which is: a submission form for shows. We put out our first submission form – which is in line with how other theatres have been doing it for a long time. But, for some reason, TNM had never adopted it.

LaRotta: Yeah, you had to know who to email about maybe getting a show.

LaGuette: And that was one of the issues – the process at TNM was very exclusive, even though it was touted as being inclusive. And TNM is where I took classes, that’s where I came up – same with Virgil. And you felt, obviously, the community – but it was an insular community. And you’d talk to people at the Hideout or the Institution, and I think our theatre was the one that people knew the least about. And I was surprised to hear that. But then, after I realized how things had been run – especially with how shows were booked – that completely made sense. And now we’ve put a new flag in the ground, like “Hey! This is for everybody!” You know? We’re all building it together and it’s gonna be really cool.

How cool is it gonna be? You can get a community-packed taste of that for yourself, comedy-lover, at the Fallout Theater's Grand Opening Party on Saturday, June 2.