Three fashion designers are debuting their newest lines of apparel at a runway show in Austin on Saturday night. 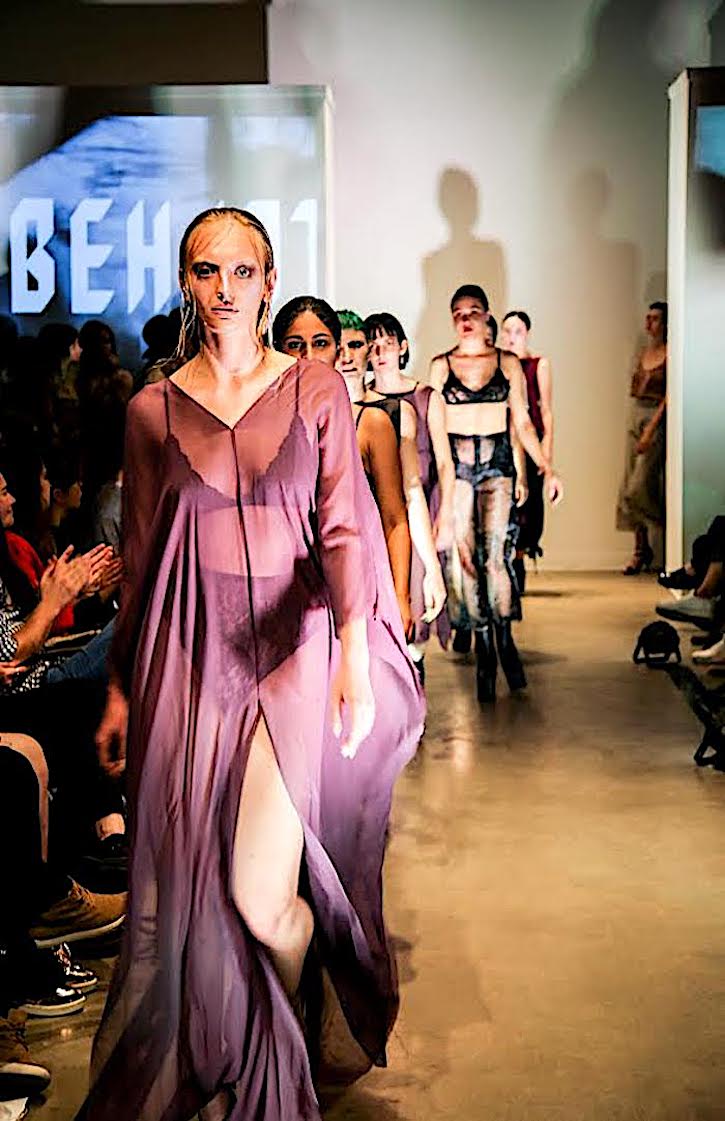 Designs by Ida Béhjat from the first Diptych show in 2017

And the show, preceded by a cocktail hour and followed by a DJ-driven dance party in a currently vacant Austin School of Film warehouse, is named after the group. And since this is the second show for the collective, it’s called Diptych II.

That’s easy to follow, right? Certainly easier than getting a start in the world of fashion.

“A lot of independent or emerging designers don’t know what the first step is to get into something that’s more established,” says Fabry, “and I think Diptych can be a way to access the fashion scene, to actually grow the Austin-based fashion community – instead of relying on people from, like, New York or L.A. We’re homegrown here, and we’re kind of a stepping stone for local designers to get to where they need to be.”

Okay, and where does a fellow named Tanner Hadfield and his Hyperreal Film Club fit into all of this?

“Tanner’s an old friend of mine,” says Taylor, “and we have a mutual friendbase, and they developed the Hyperreal Film Club a while ago – and that’s a really cool project that I love.”

“They’re really good at hosting events,” says Taylor, “so the idea was passed around a couple of times, about doing a fashion show together, and we were like, ‘Yeah, you know, let’s do it.’ I really love the way they interject visuals into another artform. And that clashing of two artforms together, the two different media, that also plays into the title of the show.”

“We fill in a lot of little gaps in the show,” says Hadfield, who studied at the Stan Brakhage film school at the University of Colorado. “We work really hard and get to do everything – it’s fun to touch on all the different elements of production design for a project. What we’re all about is creating unique and accessible platforms for underground, experimental art and artists.”

Hyperreal Film Club worked with the fashion collective on the first show, too, staged inside MASS Gallery last year. But why, because that gallery is such a fine space, why is Diptych II at the Austin School of Film instead?

“The turnout for the first Diptych show at MASS was much larger than we anticipated,” says Béhjat. “We packed out the house last time. It was so crowded, a lot of people couldn’t see the show at one point because there were too many people standing around. We had to get a much bigger space this year, so people will be able to see what they came to see.”

“We try to work with everybody in town that we think is cool,” says Hadfield, “and Austin School of Film happened to have this ginormous space that we could build out on short notice.”

So the temporarily built-out warehouse will feature three separate lines of fashion – and all the visual enhancements that the Hyperreal crew can provide. And what sort of fashion will be on display? Will there be only things that are seldom seen off a runway or outside of a club – or will there be almost utilitarian, everyday designs as well?

“What all three of us have in common,” says Taylor, “is that we all try to pull from both ends of that spectrum. We consider ourselves held to the standards of high fashion, but it’s also important to us that the clothing can actually function in everyday life. A lot of what we make, you could actually pull into a functional wardrobe. Some people might not consider that high fashion, but we put it all together into collections that – that are spectacular.”

So, ah, what’s the weirdest … or, at least, the most unusual piece that’ll be highlighted on the runway this year?

“We can’t tell you that!” says Fabry. “We’re not going to divulge too much before the show, because that’s the whole point. But you’ll see men’s wear and women’s wear. And everyone has varying styles, so you can expect to see a wide range that will appeal to different aesthetics.”

And if somebody sees something on the runway, and it blows them away, and they’re like, “Wow, I’ve gotta get one of those!” Are there multiples of the designs available? Does the Diptych collective have a way of making, ah, copies or …?

“Not yet,” says Taylor, with an almost Mona Lisa smile, “but that … can be arranged.”