Moontower 2018 Reviews: A Comic a Day

A schooling in stand-up from Notaro, Haddish, and more

I did not have a robust comedy education. I mean, I did my time rabidly quoting Monty Python and the Holy Grail in middle school, and I watch all of the requisite Michael Schur network sitcoms, but I wasn’t raised by comedy LPs. Last week, though, Moontower Comedy Festival gave me an auspicious schooling in the state of stand-up. 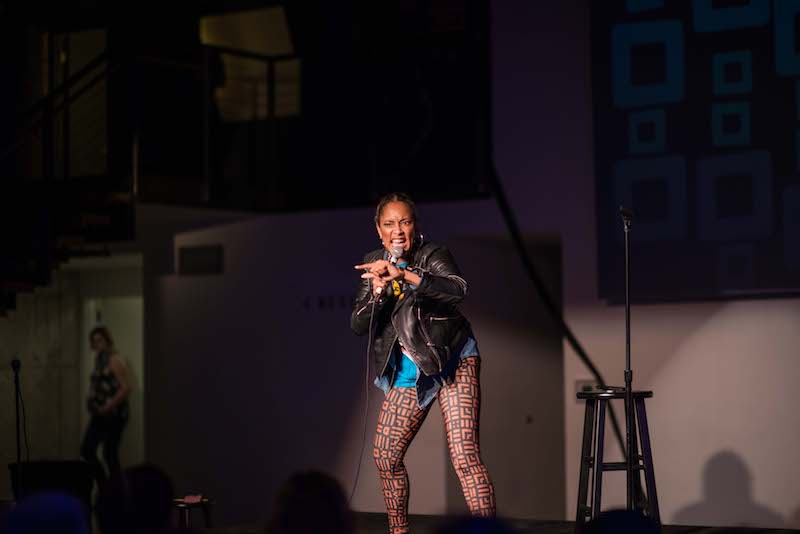 Courtesy of Bells and Whistles Productions

Each day during the four days of the annual laugh fest, I was exposed to a different comedic act or acts that enhanced my appreciation of the scope and style of the funny business today. Here's what I learned:

Day 1: Shmanners
Despite listening to some 30 podcasts a week like it’s the world’s worst paying job, I’d never attended a live recording of one and leapt at the chance to see Travis and Teresa McElroy discuss etiquette live and in person. Podcasts are often noted for creating a particularly profound false sense of intimacy between listener and creator – something to do with hearing the same people chat week-in and week-out in a format more off-the-cuff than we traditionally associate with film or television, while the listener gets the illusion of a one-on-one experience because, more often than not, they’re listening via headphones. It was a pleasant surprise, then, that Wednesday’s show made the Shmanners experience more cozy, not less. Seated on either side of an end table on the IFC Stage at the Stateside, the McElroys brought a warmth and hospitality to their discussion of alcohol – the history of American consumption and how to imbibe and serve it politely – that was more reminiscent of a small informal dinner party than a headlining act. An informal headcount taken by the hosts toward the end of the show revealed that about half the audience had never listened to the podcast before, but this clearly didn’t dampen their enthusiasm, as the inebriated exploits (personal and historical) provoked consistent peals of laughter.

If you missed the show, you’re in luck! The audio recording is expected to be uploaded to the Shmanners podcast feed in the coming weeks. 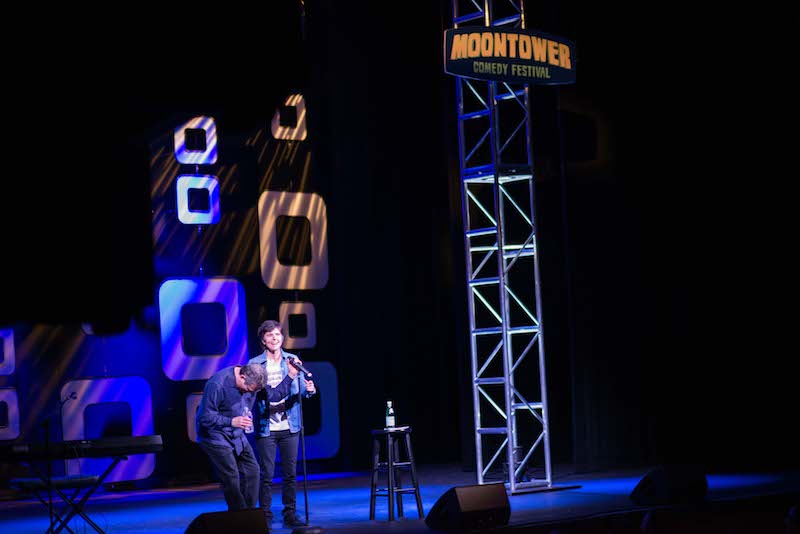 Day 2: Tig Notaro
I went in knowing this headliner by reputation – the legend of The Set About Cancer. Milling around the Paramount Theatre lobby, I found myself alternately pleased and miffed that for once, I was not the only woman with my haircut. (In line for the bathroom, I was one of at least seven women clearly taking style cues from Rhea Butcher.) I expected this show to feel big – we were at the Paramount, after all, and a mere glance at the ceiling inspires grandiosity – but Tig Notaro and her opener, comedian's comedian Andy Kindler, managed to make the evening feel as snug and conspiratorial as a hole-in-the-wall club performance. Kindler switched between playing at nostalgia (“Back in the old days, we had one joke, and we were happy to have it!”) and righteously dunking on other comics, most satisfyingly and deservingly on Louis CK. (There’s something elegant, obscured by Kindler’s scattershot style, about having him broach the subject of CK so Notaro didn’t have to.) When Notaro joined Kindler onstage, their affection for each other and instinct for teasing was palpable, and after a brief bit of chasing, Kindler retreated to the wings where – as Notaro noted repeatedly to the crowd – he stayed to watch the first 10 minutes of her set, yelling an occasional encouragement or question from behind the curtain. After Kindler’s frenetic energy, Notaro’s ease felt almost supernatural. Each segment of her set, which ranged from missteps on set with Mike Wahlberg to in-car epiphanies about the vocal competition between Gladys Knight and the Pips on “Midnight Train to Georgia,” felt like the best possible version of the story you tell on the third date to make them belly-laugh – no hiccups, but no trace of rehearsal either. The last 10 minutes were transcendent, with Notaro venturing over to the keyboard that had been lingering on the side of the stage throughout, sitting at the bench with a grand flourish, and announcing that she doesn’t know how to play the piano in the slightest but requested one (at personal expense) because it brings her joy. The delight on her face as she tickled and smashed the ivories was infectious, and her closing tale of performing Adele’s “Hello” in front of Adele at Ellen DeGeneres’ birthday party brought down the house. It took a sheer act of will for me to forsake home comforts for the unforgiving pavement outside the Stateside at 11:30pm on Friday. I knew SheBang was the most effective way to see a lion’s share of this year’s female comics, but I was curious how many stalwarts would attend one of the latest of the late shows. It was a substantial and warm crowd, as it turned out, though host Alonzo Bodden fairly ridiculed us for the abundance of empty seats left as buffers between groups. Once the show kicked off (with Janeane Garofalo at her most absent-minded professor-ish, brandishing pages festooned with sticky notes and the gallon plastic bag that she keeps them all in), a pleasant Twilight Zone feeling seeped in, as if everyone else in the house was asleep but we were up hearing stories about the struggle to find a good gynecologist in L.A., the enduring appeal of leopard print, and the pitfalls of taking tourist photos dressed up as Vikings. Everyone brought wit and energy to the stage, with Liza Treyger, Amanda Seales, and Jackie Kashian as particular standouts. At 1:30am, the crowd was released into the night, voices hoarse from constant laughter, hearts light with good will. I could imagine no better lullaby.

Day 4: Tiffany Haddish
Okay, I saw Girls Trip and once spent an entire day at work watching video compilations of Tiffany Haddish’s late-show appearances, so for once I was not flying completely blind. Sam Jay, who had the dubious privilege of closing SheBang the night before, opened, and I was glad to have the opportunity to see her perform at greater length, to a more energized crowd. The jokes went blue almost immediately, with a meditation on how Jay came out as gay after realizing that she really didn’t enjoy sucking dicks, which felt like an appropriate set-up for Haddish, whose most beloved film performance featured an enthusiastic demonstration of the grapefruit blowjob method (which you will have to google on your own time). The vibe was loose and ribald, but it shifted gears into something electric when Haddish came out. Throughout the festival, performers had been wearing street clothes – some were more polished than others, some punctuating their personalities with bold prints while others disappeared in dark hoodies and jeans – but there had been nobody I’d categorize as runway ready. Haddish strode onstage in gold stilettos and a very expensive tan jumpsuit from Saks Fifth Avenue (details she shared later in the show when she told us we should expect to see this outfit repeated, as with the white Alexander McQueen dress she wore at the Girls Trip premiere, on SNL, and at the Oscars) and she got an immediate standing ovation. Haddish started the show beaming and talking about how happy she is, and we got to pretend we’ve been on the rocketship to fame with her all along. When she peered out into the theatre, the house lights came up a bit and Haddish clocked that the crowd (in the orchestra section, at least) was overwhelmingly white and she laughed – now she knew what kind of a performance she needed to give. What followed wasn’t the set “about oppression and how we lose our identities” that she repeatedly alluded to having prepared, but a spirited Q&A in which audience members yelled queries like “What’s the best thing you’ve bought on Groupon?” (a butterfly- and hummingbird-attracting garden kit, a beehive, and a microscope – she is, by her own admission, a scientist) and “Who bit Beyoncé?” (you, question-asker, are the culprit, and Haddish is tired of covering for you). Haddish spun yarns and lessons out of every prompt, no matter how vague – the lone shout of “Grapefruit!” spurred a 10-minute tutorial on Haddish’s own patented sex move centered around Fruit by the Foot – and her easy camaraderie and command of the stage made it unclear whether this pivot away from a traditional performance was her new normal or a special dispensation she was giving the Moontower audience. Her generosity crescendoed when she closed by cursing us with happiness, even the most miserable and Scrooge-like among us, and we thanked her with another standing O.