This dance grapples with cultural appropriation and racism 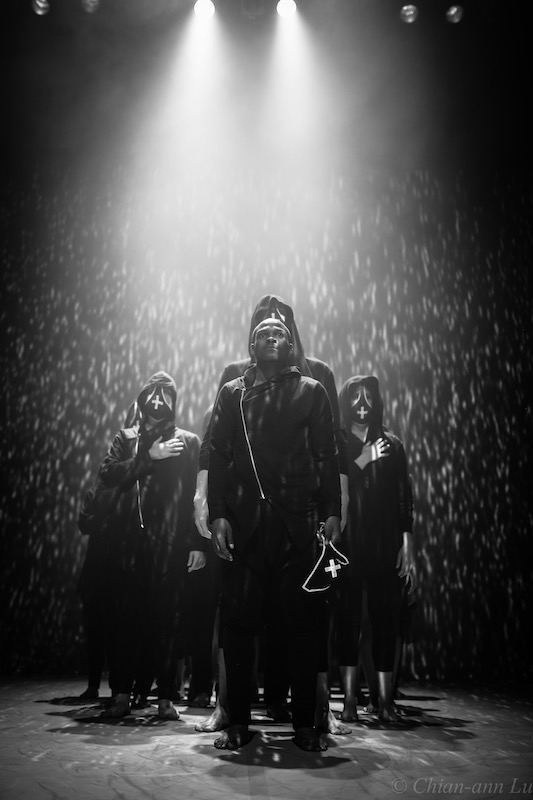 When the singer’s 2011 video for the song “Countdown” contained dances by Belgian choreographer Anna Teresa de Keersmaeker, among other images and references, he said, the attention given to discussing plagiarism was striking considering the incalculable appropriations of black art and culture by white people throughout history.

Anderson set (Re)current Unrest to early Steve Reich works “It’s Gonna Rain” (1965) and “Come Out” (1966), both of which are based on recordings of the speech of black men. “It’s Gonna Rain,” built on a sample from a sermon given by a homeless street preacher named Brother Walter, became an anthem for the nuclear crisis and helped launch Reich’s career. “Come Out” relies on a phrase spoken by Daniel Hamm, a victim of police brutality and false accusation, 19 years old at the time of the recording, and one of the Harlem Six.

“The bible tell me, they knocked upon the door until the skin came off their hands,” said Brother Walter.

“I had to, like, open the bruise up, and let some of the bruise blood come out to show them," said Hamm, referring to how he had to prove he needed to be released from jail to get medical attention for injuries he’d sustained at the batons and boots of police. (He was describing an incident that predated the Harlem Six witch hunt.)

“Ladies, if you love your man, show him you the fliest / Grind up on it, girl, show him how you ride it,” sang Beyoncé, performing various bits of choreography that also appear in de Keersmaeker’s work, shown with cinematography similar to how de Keersmaeker’s dancers are shown in films of her work.

According to an article in Pitchfork, Reich wasn’t aware of the Harlem Six until he was approached by an activist who asked him to splice tapes of interviews with the boys into a cohesive narrative. Reich agreed to do it on the condition that he could take a sample for his own work if he found something interesting.

One section of de Keersmaeker’s 1982 work Fase is set to “Come Out.”

It would be oversimplifying things to say that by setting (Re)current Unrest, a 90-minute work for two-dozen-odd dancers, to “It’s Gonna Rain” and “Come Out,” Anderson reclaimed the words of Brother Walter and Hamm. Those words, and their emotions and cadences, had already been taken out of context, distorted, looped, repeated beyond recognition, celebrated, criticized, studied. Anderson doesn’t repudiate these facts. Instead, he raises the questions: Who gets to call plagiarism, and who gets to borrow and sample freely?

I’m reminded of how the narrator of Zadie Smith’s novel Swing Time confronts shameless appropriation, by asking whether a person can “both love something and leave it alone.” But this question floats to theory-land when confronted with the primal connectors of dance and music: It’s difficult to hear a beat and not move to it, or see a social dance and not want to join in. A more practical question is the one (Re)current Unrest expands to: How can we rise to the obligation to acknowledge and value the histories behind the art that informs our lives, tastes, and ways of being? And how do we unpack these histories after centuries of obfuscation?

Anderson takes on these questions by fleshing out their oft-hidden contexts and contingencies. In the movement, performed by a cast more racially diverse than is typically seen in Austin dance, we saw the legacies of appropriation in modern dance and influence and fusion in African-derived contemporary dance. We saw all of it in the meditative tap solos of Jeremy Arnold. (Arnold is white – not to say that appropriation is just about who’s doing what.)

In the work, we also saw a collective grappling with legacies – yokes – that are murky yet omnipresent. Things shapeshifted and code-switched without warning. Sweatshirt hoods became silencing masks. The points of Lady Liberty’s crown jutted out like daggers. Chants distorted into interrogations. Laughter became crazed. Play morphed into target practice. Hands raised to the sky became hands-up.

The responsibility of unpacking these shared histories was shouldered by a griot, a master of histories played by Anderson himself. It’s a character role, but Anderson was hardly playing a character. As the head of the dance division at the University of Texas, he is tasked with sharing and unpacking his students’ experiences of racism and social justice movements and meeting them where they are, while helping them contextualize #icantbreathe and #blacklivesmatter — not to mention their own personal experiences or the murder of one of their classmates in 2016 by a homeless black teenager – within the history of racism in the 1980s, the 1960s, the 1860s, and before.

There really is no starting point, which the work acknowledged by beginning in media res, with the ensemble beginning to move inside the performance space before the audience was ushered in through a curtain of dangling ropes. We made our way around an hourglass-shaped compilation of wooden ladders, their ends protruding at various angles and papered with news articles, and filtered onto rows of benches at left and right, choosing sides based on our predictions for the best view of the dance, despite a sign that directed “white” to one side and “black” to the other.

As the griot, Anderson was at times a concertmaster for the ensemble, who, in loose white and black clothes and masks over their mouths, chanted, clapped, fell in and out of synchronous movement, and opened their mouths (unmasked for a moment) to rain. At other times, having lost their attention, Anderson held up a hand and shook his head. At one point, amid the ensemble’s cackling laughter, the rope of a playground swing turned out to be a noose. Anderson took the rope from around a young black man’s neck and placed it around his own.

When I asked Anderson about his role during the Waffle Chat, he mentioned that it included some degree of improvisation, as he responds to the ensemble around him. But facts are constants. Anderson’s great-grandfather was lynched. As griot, he must bear the histories. As professor, he must sit vigil with the shadows left by the canons of his academic forbears, not to mention his personal histories, and bear the task of illuminating them for his students.

I don’t think it’s possible to overemphasize the importance of this work – invoking the past to meet the present – at this particular time. It’s an impossible task, with all kinds of dead-ends, yes-ands, and no-buts. There is no perfection to be measured against – a perfect history did not, could not, and will not exist. Progress, authenticity, generosity, stewardship: These are the indicators we have. The dancers’ embodiment of these histories of neglect, whitewashing, white power, Jim Crow, racial profiling, discrimination, and brutality – as well as the social movements that rose to look these demons in the eye – is significant. Body-to-body empathy, dancer to individual audience member, is perhaps the closest route to understanding.

But the valuable resource of willing and sensitive dancers has to be stewarded carefully. In a section recalling the assassination of Dr. Martin Luther King Jr., a few women lay on the floor, screaming and writhing, as though they were on fire. The way in which this image resurrected the murder of King was resonant, but it was empathy with the dancers that brought this work home for me. It wasn’t that I was surprised by the prowess of the cast, made up largely of UT students I’d seen perform an earlier stage excerpt of this work like the fate of the world was hinging on them. As much as the images of these dancers in (Re)current Unrest will stick with me, I am thinking more about what will stick with them. Even stronger than kinetic empathy is body memory. The dancers are shouldering a part of this for us. For this, I am sorry, but grateful. 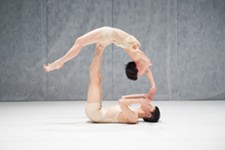 Fusebox Festival Review: Water and Tears
A butoh-inspired dance for two bodies existing as one