Maybe it’s counterintuitive to kick off a comedy festival with a show about how to behave – talk of manners conjures images of frosty multi-course dinners at Downton Abbey. But the Moontower Comedy Festival was onto something when it booked Travis and Teresa McElroy to do a live show of their hit podcast Shmanners on Wed., April 18. 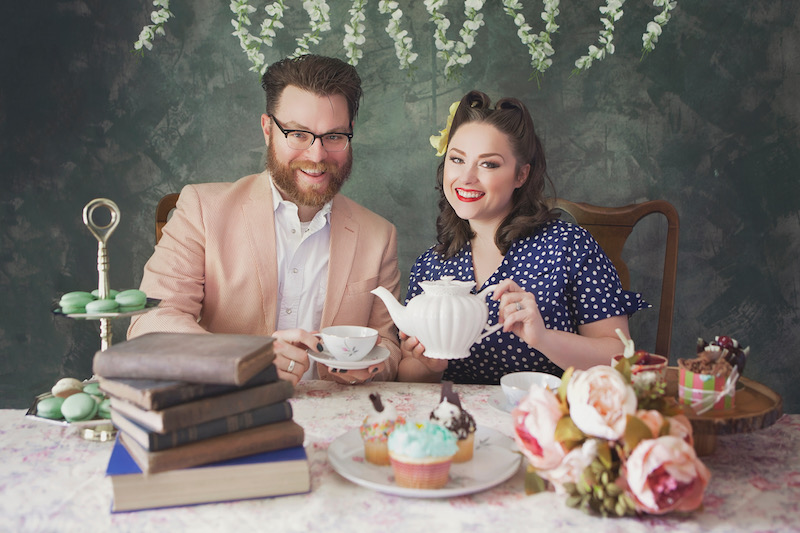 The married couple comes with a distinguished podcasting pedigree – Travis is one of the titular siblings on long-running comedy advice show My Brother, My Brother and Me, a character on the actual-play podcast The Adventure Zone, and co-host of both news round-up Trends Like These and Doctor Who fancast Run – and they bring warmth, curiosity, and easy laughter to their weekly deep-dives in the hows and whys of social niceties.

They were kind enough to speak with the Chronicle about what got them started, the secret life of Emily Post, and why etiquette is for everybody.

Austin Chronicle: So I’m curious, how did you decide to do do a podcast about manners? Do either of you have strong memories of learning etiquette growing up?

Teresa McElroy: Manners was not necessarily something that I had grown up with but more something that I felt particularly strongly about. Especially one of our flagship episodes, “Thank You Notes” – I’m a big thank you notes person –

Travis McElroy: We watch a lot of re-creation documentaries about, like, “This is what life would have been like at this time," and we also, when we first started dating, found that we have an odd shared love of like those re-creation villages. Like where there’s a blacksmith!" And here’s where they would have sold the general goods!” For whatever reason, we’re both huge dorks for that. And that was something that I think really interested us: the parallels between stuff. You know, “Thank You Notes” is such a great example, right? Because in that first episode, it was like, “Here’s the history of it” and the question was, “Does it still matter now?”

AC: You take such care to make this subject matter – which I think is sometimes stereotyped as stodgy or for people of a certain age or income – really accessible. What formed that point of view and made that a priority for y’all?

Travis: I think it’s very easy to see a lot of this stuff as these sort of rules that exist so people can judge you if you don’t do it right. But actually what we find more and more as we research is it actually helps a lot with social interaction. Because it gives you a structure like, “This is what you say here, this is what do you here, this is how you respond to this, and if you have to leave, this is what you say.” It’s way more practical than people think of it as. A lot of the time it’s to make stuff easier for you.

Teresa: Emily Post says that you should never correct anyone as far as manners go; you just set your example. And so I think that that’s another thing that makes it really accessible – it’s not about the judgment, it’s about perfecting your own business.

AC: Has there ever been an etiquette question or subject where you’ve gone in feeling like, “Oh, I can really intuit this one,” and then upon researching, found something very different than what you’d expected?

Travis: Oh yeah, that’s what I was gonna say –

Teresa: A lot about Emily Post is known from her writing but there’s so much that we didn’t realize about her as a whole, rounded person.

Travis: She led an amazing, twisty, turny life of doing different stuff, and it’s like, all through the episode I was in such disbelief about like, this is a woman who is known for manners, but also she has written books, romance novels?

Teresa: And like a cross-country diary of a trip she took with her son!

Travis: It was such a full life that you never think about when you hear the name. I think that’s it, right? When you hear “Emily Post,” it’s more like a brand, like Betty Crocker, and then you research it and like, no, this was a whole person who had all of these adventures – it’s very interesting. And that’s the kind of thing we find out a lot! We’ve talked a lot about marriages, and there are all these superstitions and rituals and things that you do at a wedding that seem so weird now but were commonplace and you go back and you’re like, “I see where at the time that made sense, to make sure you had this thing there or had these people there or did this with these people.” And it’s always interesting to me whenever we’re able to contextualize these things historically. Like anniversary presents! A lot of people talk about, “Oh, traditionally, the gifts for the anniversary is …” but that tradition, quote unquote, is only 50 years old. It was the companies that made those things putting out lists of, “Remember to buy plates and jewelry!” because they wanted to sell plates and jewelry. But there’s no [laughs] historical significance whatsoever.

AC: Travis, you’ve hosted and guested on some many different podcasts with friends and family members – what about collaborating with your spouse makes working on Shmanners unique?

Teresa: It’s not quite a date night but it’s still nice! [Laughs]

Travis: Yeah, we have time scheduled in the week to do the thing we do together! It’s very fun. And it also helps that I think my wife is incredibly funny and interesting and I just like listening to her talk.

Teresa and Travis McElroy will record an episode of Shmanners live on Wed., April 19, 7pm, at the IFC Stage at Stateside, 719 Congress. For more information, visit www.moontowercomedyfestival.com.