Instead of just staring dully at that Roseanne reboot, right?

Not that sitting around in front of a television screen as your arteries harden is other than totally edifying – oh, heavens, no! Next you’ll be thinking we’re elitists here at the ol’ Chronicle. Next you’ll be suggesting we didn’t all vote for that glorious specimen of humanity in the White House. 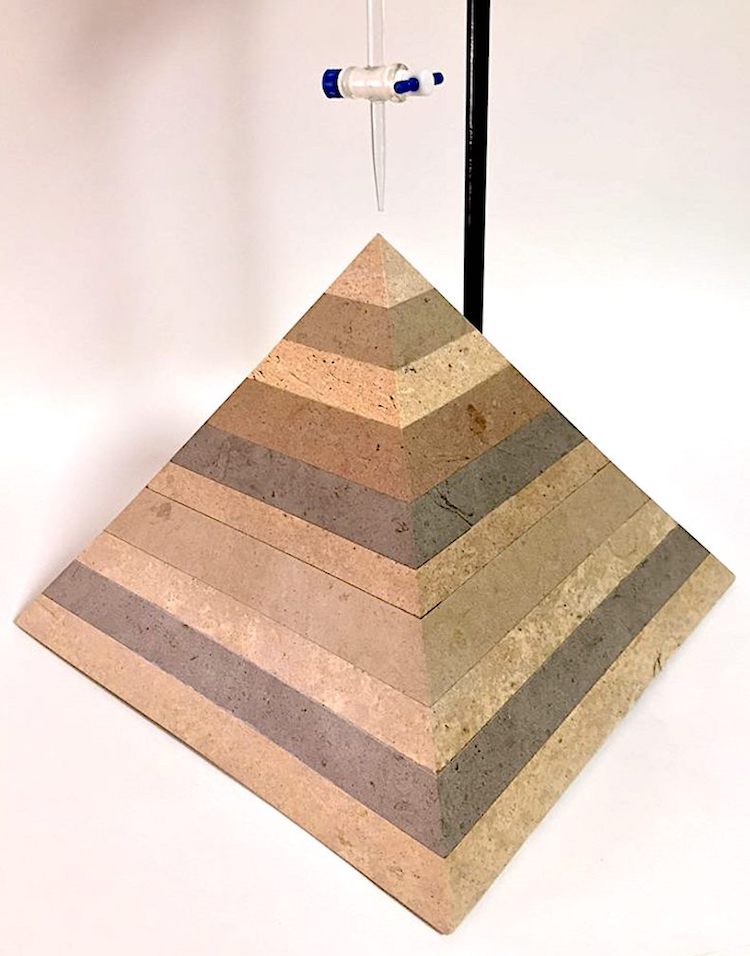 1) But you never really need to go to the opening receptions for art exhibitions, do you? Unless, we mean, you actually enjoy free snacks and drinks and friendly interaction with a bunch of likeminded folks. Because the art’s gonna be there, wherever it is, for probably a couple of weeks at least; and it’s not going to, like, change or anything, is it? WELL, HOLD EVERYTHING! The new show at Dimension Gallery, Nick Schnitzer’s solo array of works called “Inevitable Reckoning,” an exhibition about the effects of climate change, includes a few works that make use of time-based chemical state changes to make their point. (For instance: An acid clock – see image at right – with hydrochloric acid dripping away the levels of a limestone pyramid.) And that's why we're telling you about this A WEEK IN ADVANCE – because the best time to see those transformations is at the reception on Thursday, April 5, from 6-9pm. Just so you know, citizen – just so you know.

2) If you can bring yourself to amble the boozy, frat-inflected sidewalks of Dirty Sixth – although, hey, maybe that’s your cherished milieu, because Jackalope, because Casino el Camino? – then your Friday night this week (because we're talking about this week, now, yes) holds the potential for some of the sharpest comedy in this funny town, as the Velveeta Room presents headliner Jay Whitecotton, abetted in his one-night-only reign of hilarity by opener Duncan Carson. Or, what, you’d rather not laugh until your face hurts?

3) Our theatre reviewer Shanon Weaver, who knows a thing or two about putting on a show, insists that the Austin Playhouse production of Shakespeare in Love – a staging of that popular thespian-forward movie, yes – well, he says they’re knocking it outta the park over there in what used to be part of the Highland Mall. Which means – word to the wise, if you’re looking for a total date-night excursion this weekend – that you could also conveniently stop for a java and a bite at Kick Butt Coffee on your way there.

4) Say, how about getting an uneasy eyeful of some truly weird objects made from a variety of media – including porcelain, glass, and metal? Because that’s what you’ll encounter at ICOSA Gallery this weekend, in the “Chambers of Longing” from artists Andrea de Leon and Terra Goolsby. The reception is this Friday night, and, tell you what, the way genetic engineering and product design is going these days, you may just be looking at the shape of some (freaky) things to come.

5) The annual Funniest Person In Austin competition at Cap City Comedy Club begins this Sunday night. It’ll go for weeks and weeks until the more powerful semi-final shows kick in – not to mention the only-an-idiot-would-miss-it finals night, where we’ll see who takes the coveted title from that Enzo Priesnitz – but the whole battle’s a surprising delight all the way through, and … ah, we just wanted to make sure to tell you. Because we’re here for you, y’know? Because this is Austin, bae. Where we all live – for as long as we can still fucking afford to, right?