Students marching down the streets for their rights, incidents of police brutality against minority community members, and a changing Austin landscape in response to gentrification are familiar recent headlines. However, these issues have been affecting Austinites for generations.

These are just some of the elements presented in "Juntos/Together: Black and Brown Activism in Austin, Texas From 1970-83" on display through April 6 at the George Washington Carver Museum, Cultural and Genealogy Center. The exhibit focuses on issues faced by minority communities in Austin through the Seventies and early Eighties and draws parallels to current social issues. 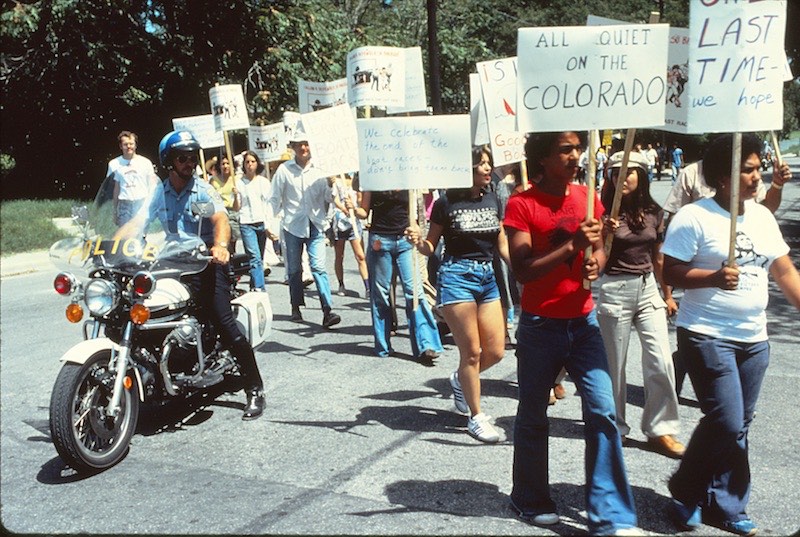 A Combination of Creativity and Creative Freedom

Carre Adams, exhibit coordinator and associate curator at the Carver, says the project began when the division manager of the city of Austin’s Museum and Cultural Programs division tasked the museum with putting together a photo exhibition for FotoATX, a new city-sponsored festival of photography. Adams immediately thought of Alan Garcia, a local historian who has garnered nationwide attention for his Instagram page ATX Barrio Archive, which focuses on the history of old East Austin. Adams proposed to Garcia a partnership with Rachel Winston, a black diaspora archivist at the University of Texas, and gave them creative freedom to create an exhibit that combined both of their fields of interest.

“These issues we are facing today unfortunately have been around and look at how far we have come and, in some cases, look at the work that is left to do.” – Rachel Winston

Winston says that after several conversations about the show's focus, she and Garcia decided to narrow the scope to moments of solidarity between the black and brown communities in the Seventies because they believe this period often lacks the attention it deserves. After many fruitless visits to archives, they finally began finding clues about the era and realized they felt a responsibility to help raise consciousness around all the activist work that was put into these causes back then.

Looking into past photographs and documents concerning East Austin was nothing new for Garcia. Over the past two years, he has been posting on Instagram historic images of the Austin that came before the social-media generation on the ATX Barrio Archive. From pictures of old Austin residents to records of businesses long gone, Garcia has been keeping alive the history of a rapidly changing city by meticulously documenting its past.

For "Juntos/Together," Garcia used his own experience in looking into the area's history and worked with Winston to reach out to community members and do archival digging at UT, Huston-Tillotson University, and the Austin History Center, and in old local newspapers. They found that during the Seventies many neighborhood groups, community institutions, and school-related organizations of students and parents consisted primarily of black and brown Austinites. He says they “were mobilizing against a lot of issues that were some 40 years ago, but these issues are still affecting us today.”

Winston says that to organize the exhibit, she and Garcia divided the information into five main categories: activist groups made up primarily of African-Americans and Chicanos and their work cross-culturally to achieve goals; student activism from elementary schools to UT; gentrification and urban renewal; small-business activism; and the impact of Ku Klux Klan activity. Since the exhibit opened, Winston has had several community members mention that without context, the images and documents would seem to be describing Austin's causes of concern today. 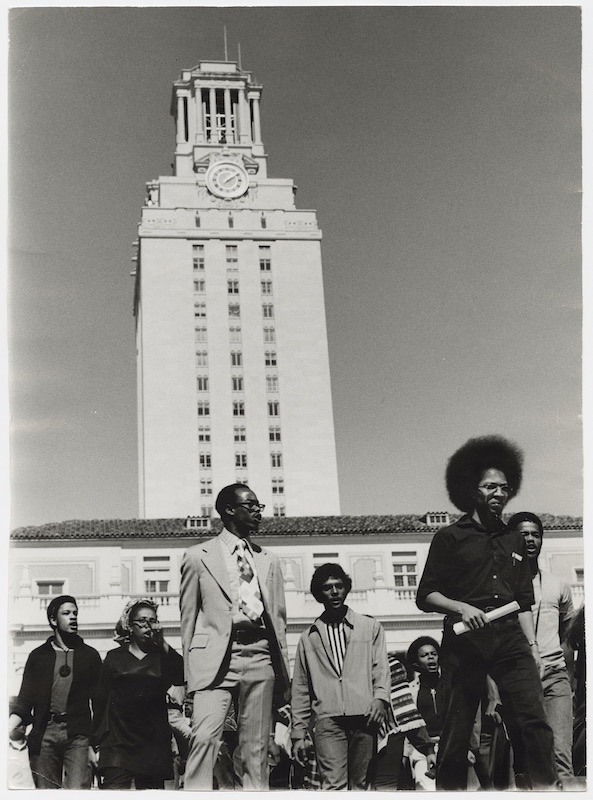 Protest march organized by TIME (The Improvement of Minority Education, Enrollment, Employment, Equality, Etc) in response to the discrimination and low enrollment of Black and Brown students at UT Austin, February 22, 1972. (Courtesy of Alan Garcia/ Almetris Duren Marsh Papers, the Dolph Briscoe Center for American History, the University of Texas at Austin)

“These issues we are facing today unfortunately have been around and look at how far we have come and, in some cases, look at the work that is left to do,” Winston says.

Many of the artifacts shine a light on different motives for activism, such as that which resulted from murders of unarmed black and brown citizens at the hands of the Austin Police Department in the 1970s, an issue that resonates with today’s protests of police brutality. But, Garcia says this evidence also shows how the minority communities of the past were protesting issues they saw forthcoming, like gentrification, by fighting against real estate developers and urban planners and advocating to support small businesses.

Garcia says these issues were specifically predominant in East Austin, where he and Winston focused the majority of the project, though they also showcased parts of West Austin (where families supported their neighbors' struggle for better living standards), and the UT-Austin campus (where students protested for minority rights). He says that though Austin is known as a uniquely liberal city in Texas, it was important to show where its liberal character originated.

“We felt it was necessary to work together, pull our different resources together, at the institution and community level, to emphasize the fact that black and brown people were always behind the activist movement,” Garcia says. “[To] show people that we were always working together, marching together, going to school together.”

For Garcia, the most surprising element he found in their research was the voice of student activism at all ages and levels. He says some students protested to school and city administrators against schools being closed in their neighborhoods, refused to attend the first day of school in protest of changes to East Austin schools, and even created an alternative school with the help of parents and East Austin community members for students who did not want to be exploited by school boards and the city government. As a former Austin public school student, Garcia says this resonated with him because he was able to tell the stories of the students who changed his future and fought against some of the issues that he witnessed again years later.

“A lot of these themes brought back memories,” Garcia says. “I was learning about the parents and students who came before me that advocated for more bilingual education, more diversity. Personally, it was an exploration of who was there before, who my elders are.”

As someone who did not grow up in Austin, Winston says it's interesting to see the history behind what she sees today. But more than anything, she says, she and Garcia feel connected to this project because for so long they had been working to tell the stories of their communities – her through her research and him through the Instagram page.

Changing the Present Through the Past

Now, Garcia says she and Garcia hope this exhibit will start a conversation about Austin’s often ignored past and lead to increased recognition for those who fought for minority issues back then, such as the Brown Berets and the mothers who organized for the issue of welfare. He says rather than continue to talk about the Confederacy or powerful men, the conversation should include grassroots-level radical activism that changed local culture and politics. 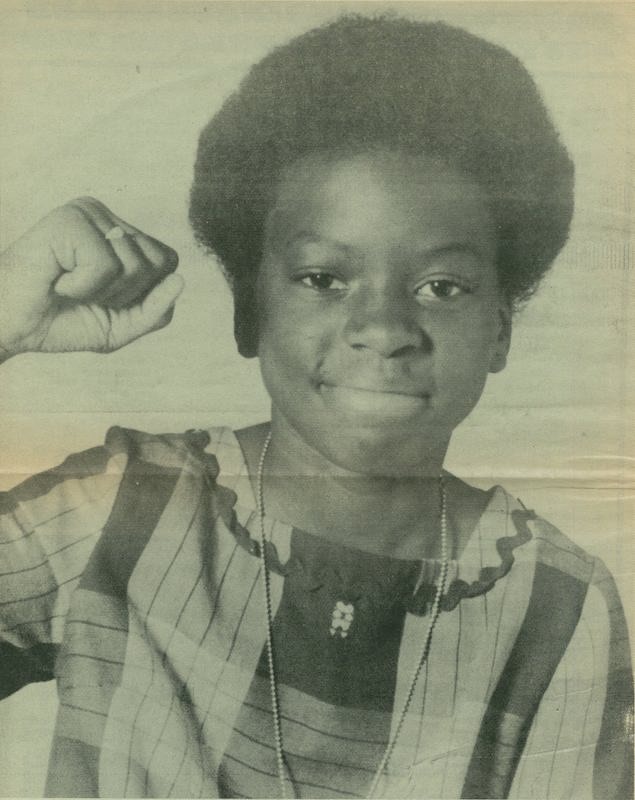 “I hope that other museums start talking about the issues of racism and gentrification in our city because these aren’t new things,” Garcia says. “This has been happening for a very long time, for decades, it is a part of our history that we don’t like to talk about – how Austin was built on the exploitation of most of these communities.”

Adams believes "Juntos/Together" is relevant because of activist fights in the U.S., such as the #MeToo, anti-racism, and reproductive justice movements. They show marginalized communities still striving for the same things they were fighting for during the civil rights era. He says it is important for the Carver as a museum that exists in the midst of these historic movements to showcase their past and draw attention to the history of their community.

As for Winston, she hopes that by showing the actions of those who came before, this exhibit will inspire citizens today to stand against injustice and fight back against the issues facing minority communities.

“It is not only the right thing to do, but it is what we owe those who have come before us to do in terms of carrying out that legacy and continuing to call out and resist in our lives today,” Winston says.

Austin is more than just live music and tourist attractions, Garcia says. There are a lot of struggles that don’t get much official attention by local institutions, universities, and museums. He says it is time to change that narrative.