Remembering the gifted young bassist who lost his life

First things first: Draylen Mason was a musician. Let's be clear on that before this talented young bass player comes to be defined by his age or how he lost his life. He was active in the city's music scene and had been accepted to both the University of Texas' Butler School of Music and the University of North Texas music program. Mason knew the score. That's been made clear by everyone who's spoken about the 17-year-old East Austin College Prep student since a package left outside his family's home exploded, killing him and injuring his mother. Whether it was someone who knew him from the Austin Youth Orchestra, where he was the principal double bass player, or the educational music program Austin Soundwaves, which he joined in its first year, 2012, and where he had risen to the position of principal bassist, or the Austin Chamber Music Center or the Interlochen Center for the Arts, where he also studied, or the Los Angeles Philharmonic's National Take a Stand Festival, in which he had the privilege of rehearsing with bassist Oscar Meza, or EAPrep, where he had been a student since sixth grade and was due to graduate this spring, the sentiment was the same: He really loved music, he worked hard at it, and he was really, really good. His acceptance to both the Butler School of Music and UNT's prestigious music program is further testimony to that, as well as an indication that Draylen Mason had a bright future ahead as a professional musician.

Although Draylen had made the double bass the focus of his studies, he played a range of instruments – electric bass, guitar, cello – and a range of music, including jazz and mariachi. And as if playing music wasn't enough, he composed it, too. A piece of chamber music that he wrote, titled "Hell Fire," was included in Golden Hornet's second annual Young Composer Concert. Next week, the third Young Composer Concert will take place, and Golden Hornet has decided to dedicate it to Draylen.

By all accounts, he was deeply appreciative of his instructors and mentors and supportive of his peers. Statements in news reports and posts on Facebook relate stories of his kindness and generosity. And those stories have generated a response in kind. In just four days, a YouCaring.com campaign to raise funds for the Mason family has drawn 2,430 donations totaling more than $87,000.

On the local arts scene, Salvage Vanguard Theater has postponed the opening of its production of con flama by Sharon Bridgforth, to mourn the lives of Draylen Mason and Anthony Stephan House, who was killed by a similar package bomb a week earlier. On Sat., March 17, at 6pm, the company will hold a con flama community healing performance and gathering at Givens Park. The production will open Thu., March 22, and run through April 7 at the Dougherty Arts Center. For more information, visit the SVT website. 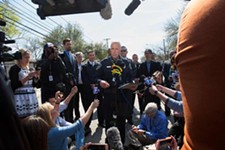